There is information about an anti-torpedo defense system, the 5″/64 gun, the familiar 76mm/62 gun, and the Marlin 40mm gun systems and their associated ammunitions and support systems. But the real surprise was a mini-torpedo, called Black Scorpion. 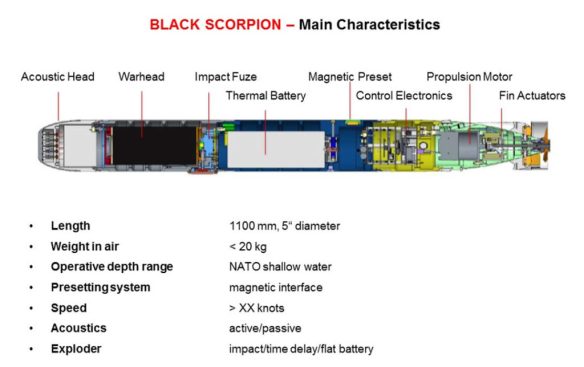 I have a hard time figuring what will be done with this mini(micro)-torpedo. They say it will work from “Unmanned Surface Vessels (USVs), SEAL Delivery Vehicles (SDVs), Patrol Boats, Fast Attack Crafts, helicopter/drones, Unmanned Aerial Vehicles (UAVs), and Unmanned Underwater Vessels (UUVs).”

Launchers are illustrated for submarines, fast inshore attack craft, and helicopters and drones.

There are a lot of unexplained parameters for this weapon. Presumably it can operate at depth some depth if it is to be launched from a submarine but there is specific reference to ASW in the littoral, so it might be relatively shallow. What is its range and speed? Less than 44 inches long and with an all up weight of less than 44 pounds, it is unlikely the warhead is much larger than ten pounds. It unlikely to sink anything of more than about 100 tons, but it might be enough to disable the rudder or propeller on even a large ship. There are warnings in the text not to expect too much.

“The Leonardo conference host presenter stressed that this is a miniature lightweight torpedo and performs as such. Thus, the user should not expect the range, performance, and characteristics of a comparable lightweight, medium, or heavyweight torpedo…”

I sure would like to see some testing of this and the Grumman Common Very Light Weight Torpedo which is about five times larger. One of them might be the ship stopper the Coast Guard needs.