Skip to primary content
Since ISIS’s successful weaponization of a commercially available “drone,” as a flying improvised explosive device (IED), there has been a lot of discussion about the possibility of using hobby drones, or the technology associated with them, as a sort of poor man’s guided missile.
War on the Rocks’ “The Democratization of Air Power: the Insurgent and the Drone,” by T.  X. Hammes, Oct. 18, 2016, does a great job of outlining the potential dangers. In particular I can see that his suggestion that they could be used to employ a small explosively formed projectile to attack the wing tanks of parked aircraft could be very effective.
As a beginning drone pilot (I have both an FAA licence for drones and FCC radio amateur radio license to allow use of transmissions of more than 25 milliwatts) I thought perhaps I could put some of this into context, but I found another post, also from “War on the Rocks,” that probably does a better job than I could. “Why the IED Threat Has Barely Started” by Mark Jacobsen.
Still I would like to make some small points:
Capabilities:
When they think of drones, many, perhaps most people, will think of multi-rotors, those strange new aircraft that fly on, usually four, electric motors, but they can have amost any number three or more. They can pack an amazing degree of electronic sophistication into very small and relatively cheap packages. These can include auto pilots with GPS navigation with waypoints. The Phantom 4 is an example of the state of the art. The FAA now considers all radio controlled aircraft as “drones.” 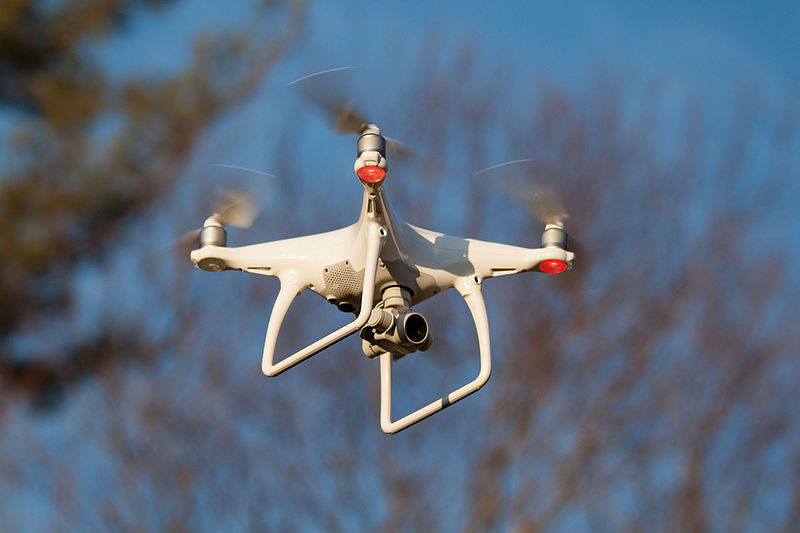 Photo: DJI Phantom 4, by Doobybutch
Multi-rotors are all electric powered. Their range is limited and usually they are controlled by 2.4 GHz radios of limited output. Their visual systems that allow real time control are usually 5.8 GHz. These are short range, line of sight and can be blocked by trees and terrain.  In fact all the frequencies that are used to control and provide video for hobby UAVs (910MHz, 1.2-1.3GHz (1200-1300MHz), 2.4 GHz, and 5.8 GHZ in the US) are line of sight systems.
The are not the only potential platforms. Autopilot and navigation systems can also be applied to fixed wing aircraft or surface vessels as well as multi-rotors, and if internal combustion engines are used, they can have very long ranges. At least one fixed wing drone has crossed the Atlantic. On the other hand internal combustion systems are generally noisy and sacrifice the advantage of quiet approach enjoyed by electric systems.
Implications:
Range against moving targets like ships is limited. Fixed targets with a known geographic position can, at least theoretically, be attacked at much longer ranges.
(gCaptain has a series of ship chase videos, including the one above, that illustrate what can be done in terms of piloting a drone out to intercept a ship. The videos are all about ten to twelve minutes long. That is a typical quadcopter endurance. The Phantom 4 now claims an endurance of 28 minutes. This is a round trip and an attack would only require one way. Still the range may be less than the two way range shown because of limits on the reach of the control systems)
Reliably extending real time control beyond a couple of milles may require special transmitting antenna.
Payloads for hobby systems are very small. Most are designed for, at most, a camera like a “Go-Pro” (about 6 oz. while a typical hangrenade is about 14 oz.). Carrying greater weight will generally require a trade-off in reduced range.
Countermeasures:
The DOD is taking the small UAS threat seriously, as evidenced here and here.
For attacking moving targets, the operator requires a controlling signal from the control transmitter and, if the target is beyond the operators ability to observe both the target and the relatively small drone, a video signal from the drone. Neither of these signals is encrypted, though the typical 2.4 GHz control signal is usually frequency agile. Disrupting either signal for an extended period may result in loss of control. Early command guided missiles during were defeated relatively easily using electronic countermeasures. The presence of these signals may serve to alert the possibility of an attack.
Attacking fixed targets at a known position requires only GPS, but this signal can be rendered inaccurate with GPS blocking or spoofing.
A directed electro-magnetic pulse may be able to fry internal circuits that are built with no apparent reason for hardening.
What does it mean to us?:
The threat to parked aircraft is real, but our own aircraft are unlikely to be a target, except perhaps for those working in SOUTHCOM.
The Navy might reasonably worry about one of these taking off from a dhow or near shore in the Straits of Hormuz or Bab-el-Mendab, as a carrier passes through and having a drone attack a plane on deck in hopes of causing a major conflagration. Of course, the drone is more likely just trying to get a video from an unusual angle. We don’t really have to worry about that happening in a US port, because carriers fly off their airwings before returning to homeport.
There is the possibility of a drone attacking the bridge of a ship as it approaches a turn in a narrow channel, and the ship running aground or colliding with a bridge or another ship in the resuting confusion.
The Future:
Battery technology has been advancing very rapidly and likely will continue to do so, giving electric drones greater range.
There is some concern that future development may allow target recognition allowing the drones to pursue a moving target without operator control.
I like the summary from  “Why the IED Threat Has Barely Started”

“We cannot afford to be complacent and should not infer too much from the relative absence of flying IED attacks thus far. Yes, small drones have proliferated rapidly, but the technology is still in its toddler years, and today’s widely available consumer drones are not ideal weapons. It is the next generation of drone technology that has me worried, and it will be here soon.”