(Note this is a work in progress and therefore always incomplete)

Regrettably many of the historical links listed below are broken after the Coast Guard changed their computer systems. The current Coast Guard history site is here. Some of the broken links may be found there.

When she steams into the harbor
People don’t flock ’round like bees;
For she ain’t no grim destroyer,
No dark terror of the seas.
And there ain’t a load of romance
To the guy that doesn’t know,
In a ship that just saves vessels
When the icy northers blow.

But the men that sail the ocean
In a wormy, rotten craft,
When the sea ahead is mountains
With a hell-blown gale abaft;
When the mainmast cracks and topples,
And she’s lurching in the trough,
Them’s the guys that greet the “Cutter”
With the smiles that won’t come off.

When the old storm signal’s flyin’,
Every vessel seeks a lee,
“Cept the “Cutter”, which ups anchor
And goes ploughing out to sea,
when the hurricane’s a-blown’
From the banks of old Cape Cod
Oh, the “Cutter”, with her searchlight,
Seems the messenger of God.
– author unknown

The Meaning of “Semper Paratus” (pdf)

The Long Blue Line: The Ensign—Coast Guard’s brand identity since 1799!

Alexander Hamilton, Letter of Instructions to the Commanding Officers of the Revenue Cutters, 4 June 1791

They will always keep in mind that their countrymen are freemen, and, as such, are impatient of everything that bears the least mark of a domineering spirit. They will, therefore, refrain, with the most guarded circumspection, from whatever has the semblance of haughtiness, rudeness, or insult. If obstacles occur, they will remember that they are under the particular protection of the laws and that they can meet with nothing disagreeable in the execution of their duty which these will not severely reprehend. This reflection, and a regard to the good of the service, will prevent, at all times a spirit of irritation or resentment. They will endeavor to overcome difficulties, if any are experienced, by a cool and temperate perseverance in their duty–by address and moderation, rather than by vehemence or violence.

“The Coast Guard We Once Knew”

The Book of Valor–List of awards for service in WWII

Hero Names for the OPCs

The following was lifted whole cloth from the following site:http://www.flagguys.com/coastguard.html

Some definitions and thoughts on the meaning and importance of the US Coast Guard:

“The Coast Guard occupies a peculiar position among other branches of the Government, and necessarily so from the dual character of its work, which is both civil and military. Its organization, therefore, must be such as will best adapt it to the performance of both classes of duties, and as a civil organization would not suffice for the performance of military functions, the organization of the service must be and is by law military. More than 120 years of practical experience has demonstrated that it is by means of military drills, training, and discipline that the service is enabled to maintain that state of preparedness for the prompt performance of its most important civil duties, which are largely of an emergent nature.”

Bertholf discussed the inherent differences between the Coast Guard and the Navy as well as indicating why the Coast Guard should still, however, remain a “military service”:

“. . .the fundamental reasons for the two services are diametrically opposed. The Navy exists for the sole purpose of keeping itself prepared for . . . war. Its usefulness to the Government is therefore to a large degree potential. If it performs in peace time any useful function not ultimately connected with the preparation for war, that is a by-product. On the other hand, the Coast Guard does not exist solely for the purpose of preparing for war. If it did there would be, of course, two navies–a large one and a small one, and that condition, I am sure you will agree, could not long exist. The Coast Guard exists for the particular and main purpose of performing duties which have no connection with a state of war, but which, on the contrary, are constantly necessary as peace functions. It is, of course, essentially an emergency service and it is organized along military lines because that sort of an organization best enables the Coast Guard to keep prepared as an emergency service, and by organization along military lines it is invaluable in time of war as an adjunct and auxiliary to the Navy. . . .while peace time usefulness is a by-product of the Navy, it is the war time usefulness that is a by-product of the Coast Guard.”

What is the origin of the saying “You have to go out, but you do not have to come back”?

A: A letter to the editor of the old Coast Guard Magazine written by CBM Clarence P. Brady, USCG (Ret.) which was published in the March 1954 (page 2) issue, states that the first person to make this remark was Patrick Etheridge. Brady knew him when both were stationed at the Cape Hatteras LSS. Brady tells the story as follows:

“A ship was stranded off Cape Hatteras on the Diamond Shoals and one of the life saving crew reported the fact that this ship had run ashore on the dangerous shoals. The old skipper gave the command to man the lifeboat and one of the men shouted out that we might make it out to the wreck but we would never make it back. The old skipper looked around and said, ‘The Blue Book says we’ve got to go out and it doesn’t say a damn thing about having to come back.'”

Etheridge was not exaggerating. The Regulations of the Life-Saving Service of 1899, Article VI “Action at Wrecks,” section 252, page 58, state that:

“In attempting a rescue the keeper will select either the boat, breeches buoy, or life car, as in his judgment is best suited to effectively cope with the existing conditions. If the device first selected fails after such trial as satisfies him that no further attempt with it is feasible, he will resort to one of the others, and if that fails, then to the remaining one, and he will not desist from his efforts until by actual trial the impossibility of effecting a rescue is demonstrated. The statement of the keeper that he did not try to use the boat because the sea or surf was too heavy will not be accepted unless attempts to launch it were actually made and failed (underlining added), or unless the conformation of the coast–as bluffs, precipitous banks, etc.–is such as to unquestionable preclude the use of a boat.”

Timeline for evolution of the Coast Guard: http://www.uscg.mil/history/faqs/when.asp

What Should Every Coast Guardsman Know About Our History?

The Long Blue Line: 150 years of Arctic operations and the Polar Security Cutter

US Coast Guard history and images

The Long Blue Line: Native Americans in the Coast Guard—Semper Paratus since 1815

The Long Blue Line: Combat Captain Hugh Campbell and the Cutter Eagle in the Quasi-War, Part One, Part Two

US Revenue Cutters Captured in the War of 1812, By William R. Wells

The Long Blue Line: William Ham, Cutter Jefferson, and the War of 1812

The Long Blue Line: The Coast Guard fought in the Civil War 160 years ago!

The Long Blue Line: 140 years ago–FRC hero William Chadwick and the fight for the George Taulane

A Bear of a Sea Story

The Long Blue Line: Overland Expedition–saving lives above the Arctic Circle over 120 years ago!

The “Coast Guard” in the Spanish American War

“IN THE FACE OF THE MOST GALLING FIRE: The Revenue Cutter HUDSON at Cardenas Bay,” William R. Wells, II ©1997

The Long Blue Line: Revenue Cutter Hudson and the Battle of Cardenas Bay in the War with Spain

The Long Blue Line: Rasmus (Midgett) gets the Gold for individual heroism in a hurricane rescue!

The Long Blue Line: Coast Guard pioneers the marine radio over 100 years ago!

“U.S.C.G. Patrol Craft Built before WWII (Six-Bitters, WPC, WSC)” “…lists the 317 patrol craft built or acquired by the U.S. Coast Guard from its organization in 1915 through the start of WWII.”

The Long Blue Line: Station Nome—saving lives near the top of the world! 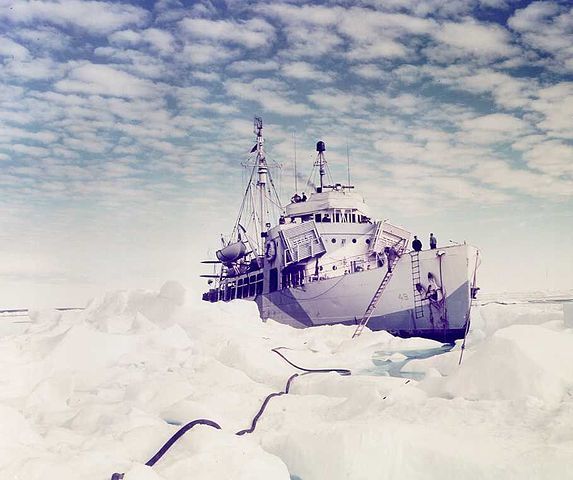 The “Black Tom Island” incident, Genesis of the US port security program (pdf)

The Long Blue Line: Ship of heroes—Seneca’s history-making rescue of World War I

Prohibition was a shooting war for the Coast Guard

The Long Blue Line: The storied career of ice cutter Northland and the Greenland Patrol 75 years ago!

The Long Blue Line: Danmark—the friend-ship between Denmark and the Coast Guard

The Coast Guard in the WWII Battle of the Atlantic

The Long Blue Line: Lt Crotty and the Battle for Corregidor 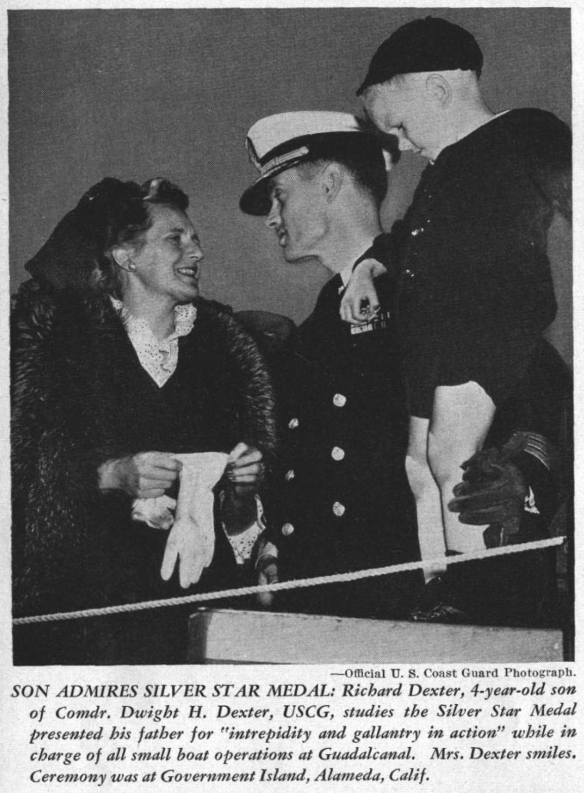 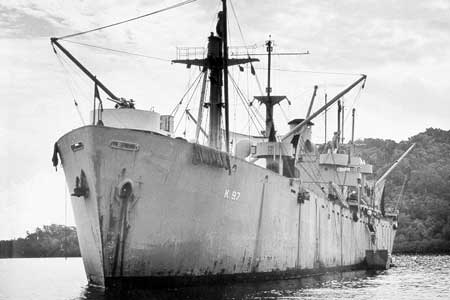 The Long Blue Line: “Selfless devotion to duty”—Seaman Scheuerman and the bloody landings at Salerno

327s, Why Were They So Successful?

The Long Blue Line: The attack on Pearl Harbor—“a date that will live in infamy”

The Long Blue Line: Pritchard and Bottoms, Last of the Coast Guard’s MIAs

The Coast Guard and the North Atlantic Campaign (pdf)

Pritchard and Bottoms–Last of the Coast Guard’s MIA’s

The Long Blue Line: Last of the Coast Guard fishing fleet— Hurricane San Calixto and the loss of EM Dow

The Long Blue Line: A wartime rescue by Cutter Argo 75 years ago

The War in the Pacific, The Coast Guard During World War II

1943: The Development of Air-Sea Rescue 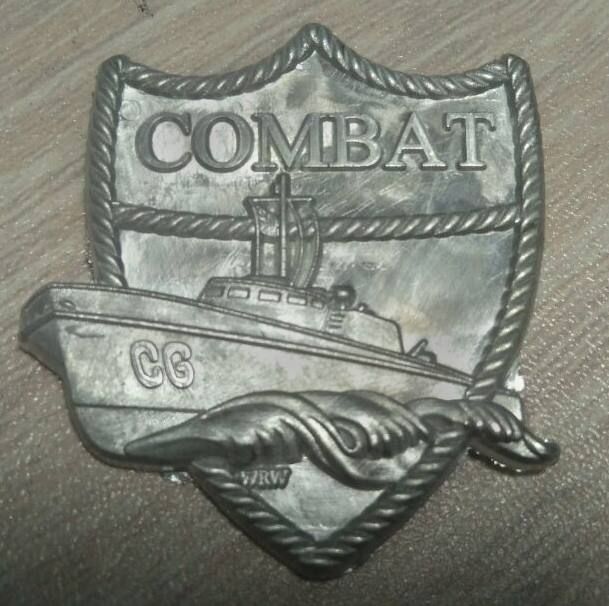 The Long Blue Line: “Into the Jaws of Death”—SM2 John Roberts and LCI-93 at Omaha Beach

The Long Blue Line: The life and times of Marvin Perrett—Portrait of a World War II coxswain and FRC namesake

The Long Blue Line: Leyte liberation–Merry Christmas from the General and the dead of LST-66 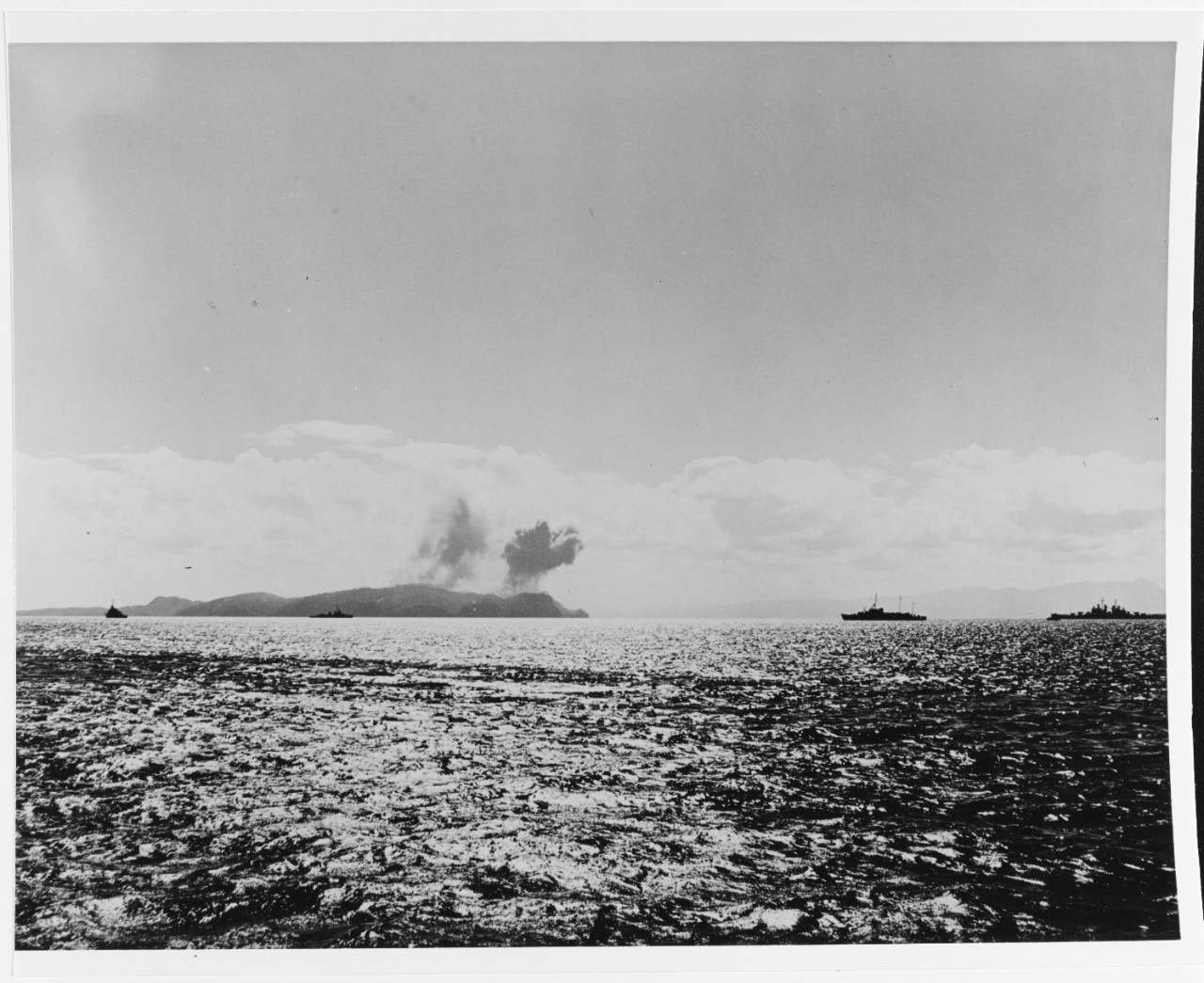 Two “Fletcher” class destroyers (left) and a “Cleveland” class light cruiser (right) standing off Corregidor Island as it is bombarded by ships and aircraft, prior to landings there, 16 February 1945. Other ship present (2nd from right) is force flagship USCGC INGHAM (WAGC-35). National Archives #80-G-273318

Leslie B. Tollaksen, USCGC Chelan, USS Moberley, and the Last Battle in the Atlantic, May 5/6, 1945

The Long Blue Line: The last Nazi–U-234 surrenders 75 years ago 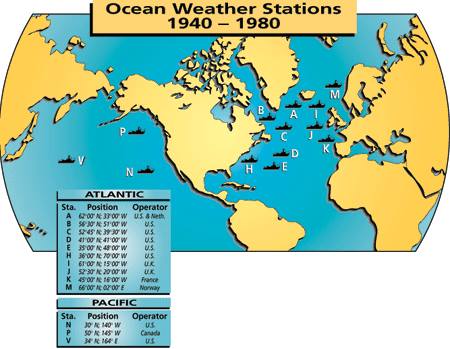 Helicopters in the USCG

The Long Blue Line: Cold War Cutter Courier—“Valiant fighter in the cause of freedom”

The Long Blue Line: Coast Guard’s mission to the tropics–LORAN aviation in the Philippines

The Long Blue Line: Lest we forget—the Triumph-Mermaid tragedy 60 years ago

The Long Blue Line: “Tip of the Spear”—Coast Guard joins the fight in Vietnam

The U. S Coast Guard in Vietnam: Achieving Success in a Difficult War

The Long Blue Line: 55 years ago, the Coast Guard joined the fight in Vietnam 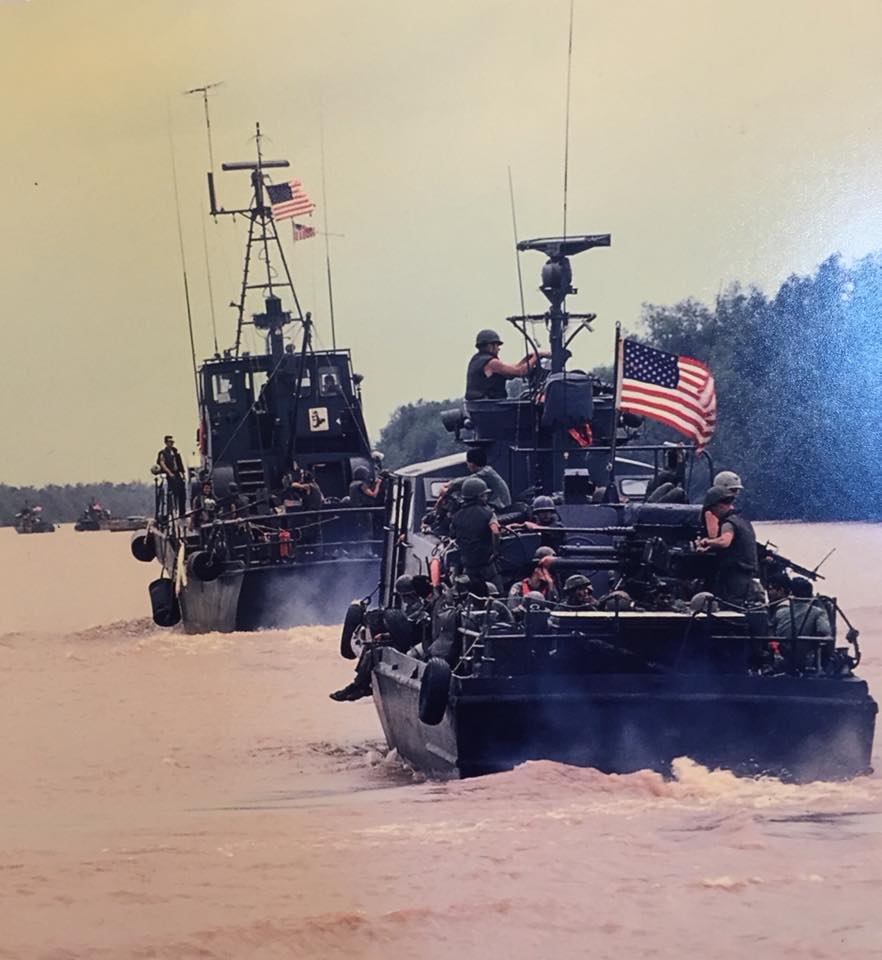 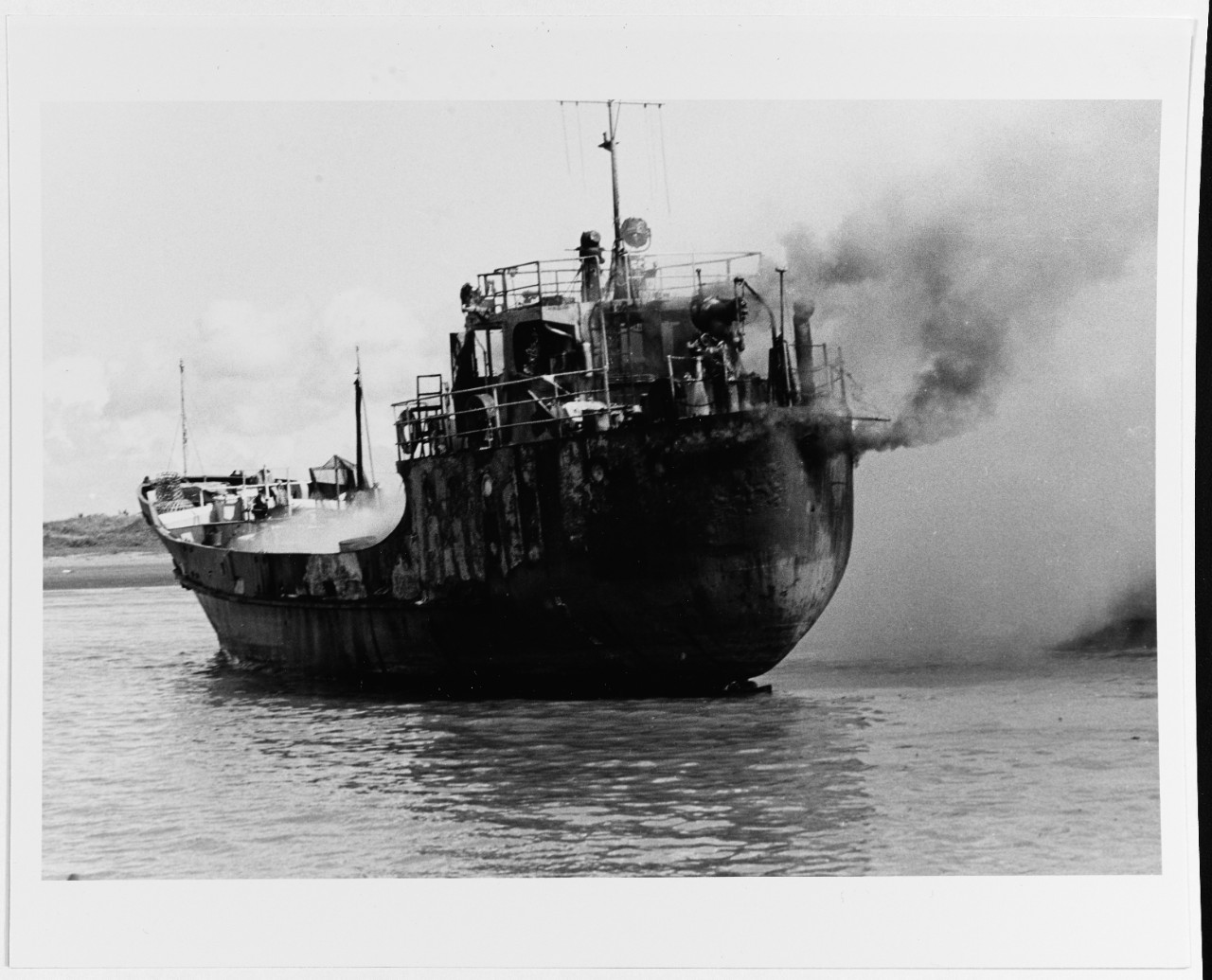 North Vietnamese 100′ Trawler burns on a South Vietnamese beach after being forced ashore by USCGC POINT LEAGUE, on 20 June 1966. It was carrying an estimated 250 tons of supplies for the Viet Cong. USN 1116663

The Long Blue Line: Dauntless and the Origins of Drug Interdiction

Formation of the HITRON

How We Got in this Mess, a Short History of CG Shipbuilding

The Long Blue Line: PATFORSWA–Largest Coast Guard Unit Outside the US

The Dutch in the Medway–Rudyard Kipling