Caption: Biggest and costliest yet. This is the radio room on the U.S. Coast Guard Cutter Chelan, the newest cutter of the service now anchored at the Navy Yard, Washington D.C. This radio room houses three transmitters and three receiving sets. On the maiden trip, she picked up an SOS and towed schooner 1,500 miles, a record tow. Ensign Leslie B. Tollaksen, is shown in the photograph. Harris & Ewing, photographer. 1928 November 26. LOC LC-H2- B-3101 [P&P]

While looking into the sinking of U-853, the next to last U-boat sunk during World War II, I learned about the career of a largely unrecognized Coast Guard Officer, Leslie Bliss (Tolley) Tollaksen (1903-1973), Cdr., USCG. The story also links the next to last US warship sunk in the Battle of the Atlantic, USS Eagle 56, the last US merchant ship sunk in the Battle of the Atlantic, SS Black Point, and a cutter, USCGC Chelan, turned Royal Navy sloop that sank an Italian submarine in the Atlantic.

It also brought to mind a couple of possible names for future Offshore Patrol Cutters.

We see Tollacksen in the photo above as a fresh caught ensign aboard USCGC Chelan. From a genealogy page:

Tollaksen “attended the University of Washington for two years before going and graduating from the US Coast Guard Academy in New London, Connecticut. He graduated from The USCG Academy in the Class of 1927, a year early to man the ships chasing down rum runners.

As a young Lieutenant, he was assigned to the US Coast Guard HQ in Washington, DC. He helped establish “Radio Washington” the telegraph station on Telegraph Road in Washington, DC, and also served as Aid to the Secretary of the Treasury, Henry Morgenthau, Jr. (At that time, his sister worked in the typing pool for President Franklin D. Roosevelt’s White House).

Leslie, about 1937 was the first US Coast Guard Officer selected for Post Graduate School at MIT.

USCGC Chelan was one of ten Lake Class cutters loaned to the British as part of the Lend Lease program.

U-853 was a Type IXC/40 long range U-boat commissioned 25 June 1943. In July 1944 it had been fitted with a new device, a Dutch invention, a snorkel that allowed it to run its diesels and recharge its batteries while submerged, with only a small mast protruding above the water. U-853 had not been particularly successful. It had been attacked twice by Allied aircraft on 25 March 1944 and 17 June 1944. It had had two fruitless war patrol of 67 and 49 days, before the new commanding officer took over, 1 Sept. 1944. 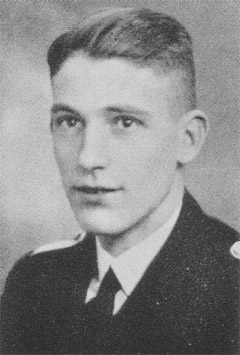 It may be an indicator of the state of the German Navy that the new U-boat commander, Helmut Frömsdorf, was only 23 when he departed for his first and final patrol as CO on 23 Feb. 1945. He had served on U-853 for four years prior to being selected for command. From the time he had assumed command, including ten days moving from ports in Germany to Stavanger, Norway, the U-boat had been underway a total of only 83 days when U-853 and the crew of 55 was lost with all hands.

Hitler committed suicide on 30 April 1945. His successor was Admiral Donitz.

On 4 May, he issued orders that all Germans forces would surrender and, as part of the surrender process, U-Boat Headquarters sent the following message that same evening:

ALL U-BOATS. ATTENTION ALL U-BOATS. CEASE-FIRE AT ONCE. STOP ALL HOSTILE ACTION AGAINST ALLIED SHIPPING. DÖNITZ.

The order was to become effective at 0800 the following morning.  However, of the 49 boats then at sea, several were submerged and would not receive the message.  Among them was the U-853.

She is now a dive site:

This boat lies in 130 feet (42m) deep waters roughly 6 miles north east of Block Island and south of Newport, USA. The boat still contains remains of most of the 55 men who perished when she was sunk on May 6, 1945, in the last U-boat action as such in WWII.

Eagle 56 was nominally a subchaser, but an old and obsolete one. It was being used to tow targets when U-853 attacked and sank it.

At noon on 23 April 1945, Eagle 56 exploded amidships, and broke into two pieces 3 mi (4.8 km) off Cape Elizabeth, Maine. The destroyer Selfridge was operating near Eagle 56 and arrived 30 minutes after the explosion to rescue 13 survivors from the crew of 62. Selfridge obtained a sharp, well-defined sonar contact during the rescue and dropped nine Mark IX Mod 2 depth charges without obvious result.  According to a classified Navy report, U-853 had been operating in the waters off Maine.  At a Naval Board of Inquiry in Portland the following week, five of the 13 survivors claimed to have seen a submarine. Several spotted a red and yellow emblem on the submarine’s sail.

The Board of inquiry, however, concluded that the sinking had been the result of a boiler explosion. The record was not corrected until 2001.

In June 2001, Purple Heart medals were awarded to three survivors and the next of kin of those killed.

A commemorative plaque was erected on the grounds of Fort Williams Park near Portland Head Light.

“Seen from an airship from ZP-11, SS Black Point steams off the east coast of the U.S., some 10 miles east of the entrance to the North River on 22 September 1944. A sailor on her foc’sle is probably watching the K-ship from which the picture was taken. The SS Silver Star Park steams in the background, both ships’ hulls reflecting hard service
National Archives photo 80-G-208086″

“”COAST GUARD DEPTH CHARGES SCORE IN LAST U-BOAT KILLING: Off Point Judith, Rhode Island, crewmen of the Coast Guard-manned frigate watch the surface boil as a pattern of depth charges scores the final kill in the long, uphill battle against Nazi U-boats in the Atlantic. Working in teamwork with three Navy vessels, the Coast Guard ship destroyed the submarine on Sunday, May 6, 1945. The Moberly operates as a unit of the Atlantic Fleet.” Moberly has just fired a hedgehog pattern as the charges drop in a circular pattern ahead of the frigate.
U.S. Coast Guard photo 4557″ 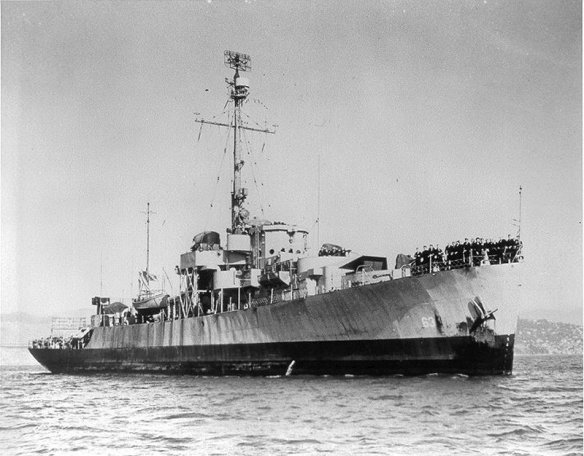 The only anti-submarine unit in the immediate vicinity was the remnants of a task group, TG 60.7 that had left New York at 1200 hours that day. It had arrived earlier after safely escorting the remaining vessels of GUS-8446, an 80-ship convoy that had originated in Oran and Casablanca. Several of the task group members were bound for the Charlestown Naval Base where the ships were scheduled to undergo extensive overhaul: destroyer Ericcson (DD-440), destroyer-escorts Amick (DE-168) and Atherton (DE-169), and the patrol frigate Moberly (PF-63). Accordingly, Eastern Sea Frontier headquarters issued dispatch 052223 diverting TG 60.7 to the sinking site and ordering various support activities to assist in discovering the intruder as needed.

Destroyer Ericcson, with the task group commander, Cdr. Francis C.B. McCune, aboard, was then under the control of a Coast Guard pilot in preparation for entering the Cape Cod Ship Canal and could not reach the scene for some time. Thus, Coast Guardsman Tollaksen found himself the Senior Officer Present and de facto commander of TG60.7.

A blow by blow of the search for, and attacks on, U-853 can be found here.

USS Moberly and USS Atherton share credit for the sinking.

The Offshore Patrol Cutters are to be named after famous cutters. We have eleven names so far, but there are at least 14 to go. Perhaps we might name one for Moberly as representative of the 75 ships manned by Coast Guard crews.