Defense News reports the winner of the Army’s “Future Long-Range Assault Aircraft” competion to find a replacement for the H-60.

With a demonstrated cruise speed of 305 knots, if it can do the SAR mission, this has real potential for the Coast Guard.

“The service wants FLRAA to be capable of traveling roughly 2,440 nautical miles (or 2,810 miles) without refueling, but also to be agile enough to maneuver troops into dangerous hot spots.”

1,725 nautical miles one way, was the threshold requirement.

Unless they add folding blades and a stowable wing like on the V-22, it really doesn’t look like it would be easily adaptable for shipboard use, but there is still another aircraft to be selected under the Future Vertical Lift program and it will be smaller. There are currently two competitors, The Bell Invictus and the Sikorsky Rader X. My money is on the Raider X compound helicopter. It also looks like it would require less modification to convert to civilian and Coast Guard use and seems to offer more improvement over existing aircraft.

I also don’t think we can assume the Sikorsky competitor for FLRAA will completely disappear.

“The Navy plans to stand up additional unmanned task forces around the globe modeled after Task Force 59 in the Middle East, Navy Secretary Carlos Del Toro told reporters Saturday…“We’ve demonstrated with Task Force 59 how much more we can do with these unmanned vehicles — as long as they’re closely integrated together in a [command and control] node that, you know, connects to our manned surface vehicles. And there’s been a lot of experimentation, it’s going to continue aggressively. And we’re going to start translating that to other regions of the world as well,” Del Toro said during a media roundtable at the Reagan National Defense Forum.”

The report goes on to mention 4th Fleet and Oceana specifically, both regions of intense interest to the Coast Guard in regard to drug interdiction and Illegal, Unregulated, Unreported (IUU) fishing respectively.

This could be a big boost to our Maritime Domain Awareness. In the Eastern Pacific Drug Transit Zone we might need uncrewed surface vessels with passive acoustic sensors since the targets of interest are poor targets for radar and optical sensors. That could lead to practical experience that could improve our ASW capability.

The U.S. Navy released photos of a fishing trawler it says carried more than 50 tons of ammunition rounds, fuses and propellants for rockets when it was boarded Dec. 1., 2022 in the Gulf of Oman. (U.S. Navy 5th Fleet via Stars and Stripes)

“For the second time in less than a month, the U.S. Navy intercepted a ship passing through the Gulf of Oman and seized a large shipment of illicit weapons bound for Yemen..The Navy made the interception on Thursday, Dec. 1. Sailors with the Navy’s 5th Fleet stopped a fishing trawler in the gulf. During a flag verification boarding, they found a large cargo of munitions and chemical propellant. The sailors seized 1.1 million rounds of 7.62mm ammo, as well as an additional 25,000 12.7mm rounds. The trawler also was carrying almost 7,000 rocket fuses and more than 2,000 kilograms of a propellant used in rocket propelled grenades. The cargo totaled more than 50 tonnes.”

The boarding party came from the expeditionary sea base USS Lewis B. Puller, but I think it is a safe bet Coast Guard personnel were involved in the boarding.

Today we have a guest author, Peter Ong. This is Peter’s sixth post on this blog, and he is now a regular contributor to Naval News. In this post, he reports a conversation with Coast Guard Cutter Forces about why the success of the Coast Guard’s Fast Response Cutter program has allowed  the Navy to cancel their MkVI patrol boat program that at one time was expected to produce 48 patrol boats.

The MkVI had only very austere galley and messing facilities, a Microwave and MREs. They were not expected to be underway more than 24 hours. The FRCs endurance, allowing days, rather than hours, on station to intercept drug and arms smugglers and their abilitiy to support counter UAS systems may be providing capabilities the MkVI simply could not have.

The U.S. Navy is divesting of their 12 in-service Mark VI Patrol Boats, which at the Surface Navy Association 2021, Major General Tracy King, USMC, Director, Expeditionary Warfare (N95) stated that the twelve Mark VIs “Were very expensive to maintain.” However, many critics and pundits of the Mark VIs’ early retirement cite that the Mark VIs still have a lot of life left in them and that their high speeds and heavy armament makes them an asset to special forces, Marines, and Navy SEALs. Mark VIs also perform capital ship escort screenings and contribute to Distributed Lethality and Distributed Maritime Operations by having a smaller vessel signature that might help U.S. Marines move around and slip ashore undetected.

In a phone interview on September 29, 2022 with United States Coast Guard (USCG) Captain John J. Driscoll, Office of Cutter Forces (CG-751), the U.S. Coast Guard captain made a comment about the Sentinel-class Fast Response Cutters (FRC) substituting for the U.S. Navy’s Mark VI Patrol Boats in the Patrol Forces Southwest Asia (PATFORSWA) region and other parts of the globe.

The U.S. Navy plans to replace the Mark VIs and the aging Patrol Coastal boats in the PATFORSWA region with USCG FRCs. When asked how the cutter fleet is integrated with the U.S. Navy and the Department of Defense, the captain replied that the cutter fleet is built into different operational security plans within the U.S. Department of Defense, but these plans are not discussable.

The captain mentioned that the FRC is tremendously capable and different in how it integrates with the Department of Defense and one can’t make comparisons between the Navy’s Mark VI and the USCG’s Fast Response Cutters because the FRC is a commissioned warship of the United States with an assigned crew whereas the Mark VI is just a patrol boat—a ship versus a boat—the ship is larger. The FRC is 154-feet long (46.9 m) with a beam of 25-feet (7.6 m) whereas the Mark VI Patrol Boat is 84.8-feet (25.8 m) long with a beam of 20.5-feet (6.2 m).

Nonetheless, one can see the huge difference in operational range. Furthermore, the success of the 65 planned Coast Guard FRCs eclipses the 12 Mark VI U.S. Navy Patrol Boats in terms of production numbers. Furthermore, the Mark VI is propelled by waterjets to 45 knots (52 mph; 83 km/h) whereas the FRC has propellers that drive it at 28+ knots. Repeated requests to the U.S. Navy asking for explanation on “[The Mark VIs are] very expensive to maintain” were not answered, but one can assume that it takes a lot of time, labor, and money to clean out the Mark VI’s waterjet intakes and impellers compared to the more easily accessible external shaft and propellers on the Fast Response Cutters when operating in littoral waters potentially teeming with flotsam and seaweed.

FRC range and endurance are important. Captain Driscoll stated that the FRCs are working in the Papua New Guinea and Indonesian region to combat Illegal, Unreported and Unregulated (IUU) fishing and are working with partner nations to address the competition for maritime resources.

As for possible up-arming of the FRCs with the Mark 38 MOD 4 30mm autocannon, that is a retrofit possibility, noted the captain, although the upcoming Polar Security Cutter (PSC) heavy icebreakers will receive the 30mm autocannons first, two on each PSC. Captain Driscoll mentioned that the 30mm autocannon is in the U.S. Navy acquisition system and that the USCG and U.S. Navy both decide on future cutter armament. Programmable and airbursting 30mm ammunition options are not discussable although if the U.S. Navy has the specialized and advanced 30mm ammunition in its inventory, the USCG can also use it depending on the cutter’s mission parameters.

The new Mark 38 Mod 4 30mm naval gun system on display on MSI Defence stand at Sea Air Space 2022. It can, in theory and with funding, be retrofitted aboard existing USCG cutters if agreed upon between the U.S. Navy and the U.S. Coast Guard. Photo: NavalNews 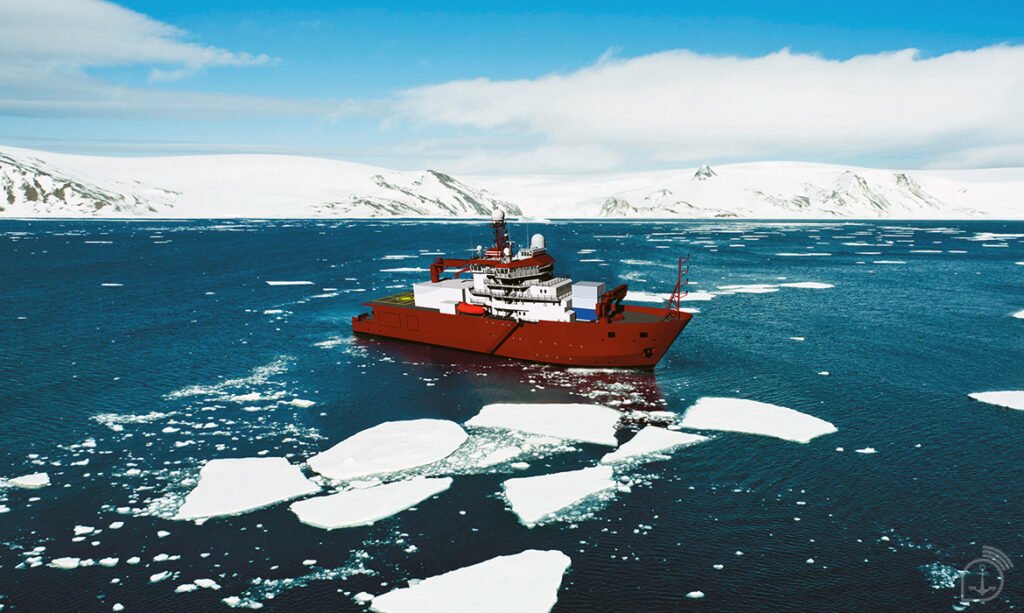 The VAMPIRE system can fit in almost any pickup or vehicle with a cargo bed. (Courtesy of L3Harris)

BAE Systems completed additional ground-to-air test firings to prove the effectiveness of 70mm rockets guided by APKWS guidance kits against Class-2 unmanned aerial systems (UAS) that weigh roughly 25-50 pounds and can travel at speeds exceeding 100 miles per hour, the company said in a Nov. 29 release…During the demonstration in Southern Arizona, five APKWS-guided counter-UAS rockets were fired from a containerized weapon system and destroyed all targets, including fast-moving drones.

Certainly this will involve more “capacity building” and possibly more equipment transfers, but, perhaps more importantly, the US is sharing intelligence with the Philippines and other SE Asian nations to enhance maritime domain awareness.

Thanks to Xavier Ng for bringing this to my attention.

H. I. Sutton provides some excellent analysis, take a look.

At Euronaval 2022, a naval defense exhibition that was held in Paris, French Company Nexter unveils the latest generation of its NARWHAL 20mm remote-controlled turret which is now armed with one 20mm automatic cannon and the MBDA’s AKERON guided missile launch pod.

I am not a fan of this particular system. I would like to see at least a 30mm gun, but it is more evidence of the practicality and desirability of combining small missiles with a gun mounted on a remote weapon station.

Would really like to see the Coast Guard push for an upgrade of their Mk38 gun mounts to incorportate either APKWS or Hellfire / JAGM.