Graphic illustration and images captured by a U.S. Navy explosive ordnance disposal team aboard M/T Pacific Zircon, Nov. 16, showing the location where an Iranian-made unmanned aerial vehicle (UAV) penetrated M/T Pacific Zircon’s outer hull during an attack Nov. 15. The one-way UAV attack tore a 30-inch-wide hole in the outer hull on the starboard side of the ship’s stern, just below the main deck. US Navy graphic

The US Naval Institute has a post providing addition detail about the November 15  drone attack on tanker Pacific Zircon.

The primary thrust of the post seems to be, to confirm that the drone was of Iranian origin, but then, that was almost assumed. They seem to have proven that, identifying it as a Shahed-136 design, a “loitering munition.”

For me the new information was where the tanker was targeted and the extent of the resulting damage.

When I first heard that this drone had hit the hull, I thought perhaps the Iranians had decided it was not to their advantage to kill crew members, as had happened in the July 30 attack on the tanker Mercer Street, but apparently that was not the case, since this strike was also on the stern where it is more likely to effect crewmembers.

On Nov. 15, a Shahed 136 explosive-tipped drone flew into the aft section of the merchant oil tanker M/T Pacific Zircon punching a hole through the hull, “while subsequently penetrating and damaging internal compartments. The UAV’s explosive impact also damaged a shipboard boiler, potable water tank and life raft,” reads the statement.

That they managed to damage engineroom equipment, which presumably required penetration of multiple internal bulkheads, after penetrating the hull, is more than I would have expected. The anti-armor, shaped charge version of the munition, which would result in a narrowly focused path of destruction, may have been used.

U.S. Central Command and Israeli officials are blaming Iran for a Tuesday attack on an oil tanker linked to an Israeli billionaire off the coast of Oman.

Tanker Pacific Zircon was 150 miles off the coast of Oman when what U.S. officials said was an unmanned aerial vehicle hit the ship at about 3:30 p.m. local time, according to the shipping company.

Interestingly this second attack was on a ship linked to Idan Ofer, brother of the Israeli billionaire, Eyal Ofer, linked to the tanker, Mercer Street, attacked in a similar manner in July 2021.

The latest attack did not result in any injuries, unlike the earlier attack that resulted in the death of two crewmembers. Both attacks occured South of Oman in the Northern Indian Ocean. On Nov. 8, U.S. 5th Fleet intercepted a fishing vessel in the Gulf of Oman smuggling lethal aid, including a large quantity of explosive material, from Iran to Yemen.

“This was a massive amount of explosive material, enough to fuel more than a dozen medium-range ballistic missiles depending on the size,” said Vice Adm. Brad Cooper, commander of U.S. Naval Forces Central Command, U.S. 5th Fleet and Combined Maritime Forces. “The unlawful transfer of lethal aid from Iran does not go unnoticed. It is irresponsible, dangerous and leads to violence and instability across the Middle East.”

The search also found more than 100 tons of urea fertilizer. Urea is a chemical compound with agricultural applications that is also known for use as an explosive precursor.

U.S. forces sank the vessel Nov. 13 in the Gulf of Oman after determining it was a hazard to navigation for commercial shipping. The four crewmembers were transferred to Yemen for repatriation Nov. 15 when The Sullivans completed an at-sea exchange in the Gulf of Aden with the Yemen Coast Guard.

“Alongside our partner forces, CENTCOM is committed to security and stability of the region and to deterring the illegal and destabilizing flow of lethal material into the region over land, in the air, and the sea,” said Gen. Michael “Erik” Kurilla, U.S. Central Command (CENTCOM) commander.

Below is a CENTCOM news release. Photos are available here. Wish they had listed the Saudi and Royal Navy participating units as well.

NAVCENT is headquartered in Manama, Bahrain and includes maritime forces operating in the Arabian Gulf, Gulf of Oman, Red Sea, parts of the Indian Ocean and three critical choke points at the Strait of Hormuz, Suez Canal and Bab al-Mandeb.

6 U.S. Navy type patrol vessels have recently been supplied to Ukraine. These are already active in the Black Sea where they face a much more powerful adversary in the Russian Navy. But the Ukrainian Navy is building a reputation as an effective asymmetric force.

These are the same 44 foot patrol boats the Navy has been buying.

Previous discussion of other boats being transferred to Ukraine here.

USCGC Charles Moulthrope arrives at Naval Station Rota, Spain. After a two-week transit across the Atlantic Ocean, the cutter arrived in-port to resupply.

This is getting to be routine. The same ship seized a fishing vessel on Sept 27 with $85M in illegal drugs, presumably the “sizable interdiction” referred to above, and USCGC Glen Harris (WPC 1144) , an another PATFORSWA cutter, has already made three drug interdictions. 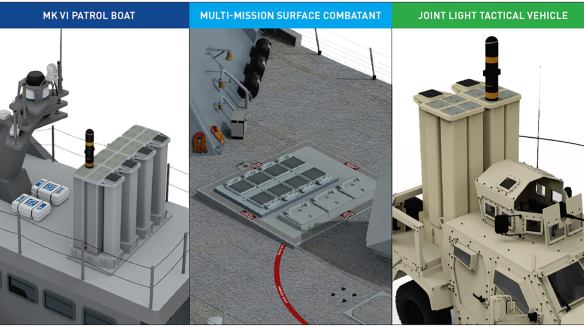 The Drive reports an exercise that claimed to employ an enhanced version of Hellfire with a range about three times as great as that of the previous versions. Hellfire’s replacement, JASM, perhaps more accurately an upgraded Hellfire, has now been approved for full rate production and there have been reports that a longer range version was in the works.

Beyond the air-launched advantages, this missile would be hugely beneficial for sea-launched applications, such as the LCS. Beyond that, it could be extremely beneficial in servicing Hellfire’s growing surface-to-air role, as well.

Since the typically reported surface to surface range of the Hellfire is 8 km, three times that would be 24 km or over 26,000 yards (equal to the longest ranged battleship hit in WWII). In most cases, that means it can reach anything within the visual horizon. It would also mean, it would out range our 57 and 76mm guns. If this longer ranged Hellfire/JASM is mounted on the new 30 mm Mk38 Mod4, it could mean even Polar Security Cutters will have a potentially more potent weapon than the 57mm Mk110, with a much smaller footprint and lower maintenance requirements.

The weapon would certainly be a welcomed addition to the Webber class patrol craft of PATFORSWA because it would give them greatly enhanced capability against swarming small inshore attack craft, helicopters, and UAS, threats common in their operating area.

As I noted earlier, JASM could provide Coast Guard vessels as small as patrol boats, with a much more accurate, more powerful, and longer ranged response to the need to be able to forcibly stop vessels both small and large, while also providing counter UAS, a degree of anti-aircraft protection, and should it ever be required, a naval fire support ashore capability. 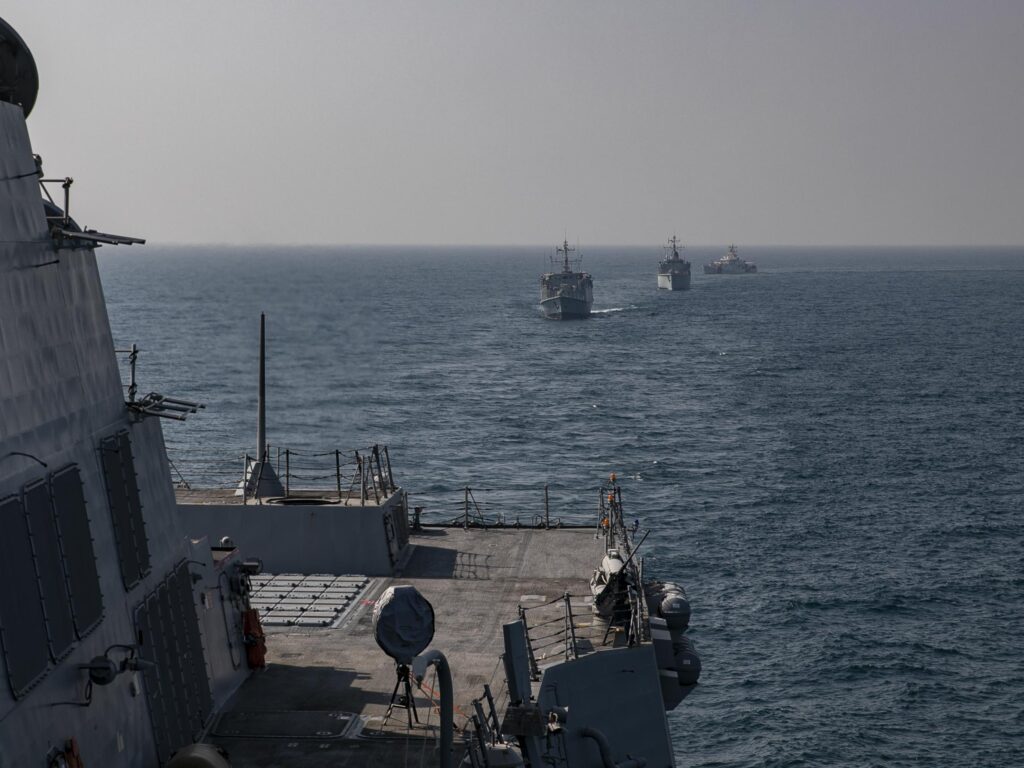 Naval forces from the United States and United Kingdom conducted a bilateral exercise in the Arabian Gulf, Oct. 7. U.S. NAVY (That is USCGC Robert Goldman (WPC 1142) at the end of the column.)

Naval forces from the United States and United Kingdom conducted a bilateral exercise in the Arabian Gulf, Oct. 7, which featured the use of unmanned systems and artificial intelligence to enhance maritime monitoring by crewed ships and operators ashore, U.S. Naval Forces Central Command Public Affairs said in an Oct. 7 release. 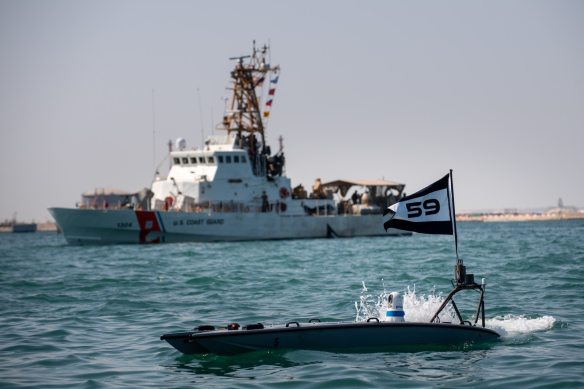 A bitter sweet day. End of an era. The last of six Island class cutters assigned to PATFORSWA is now decommissioned. The force has now been reequipped with six Webber class Fast Response Cutters. 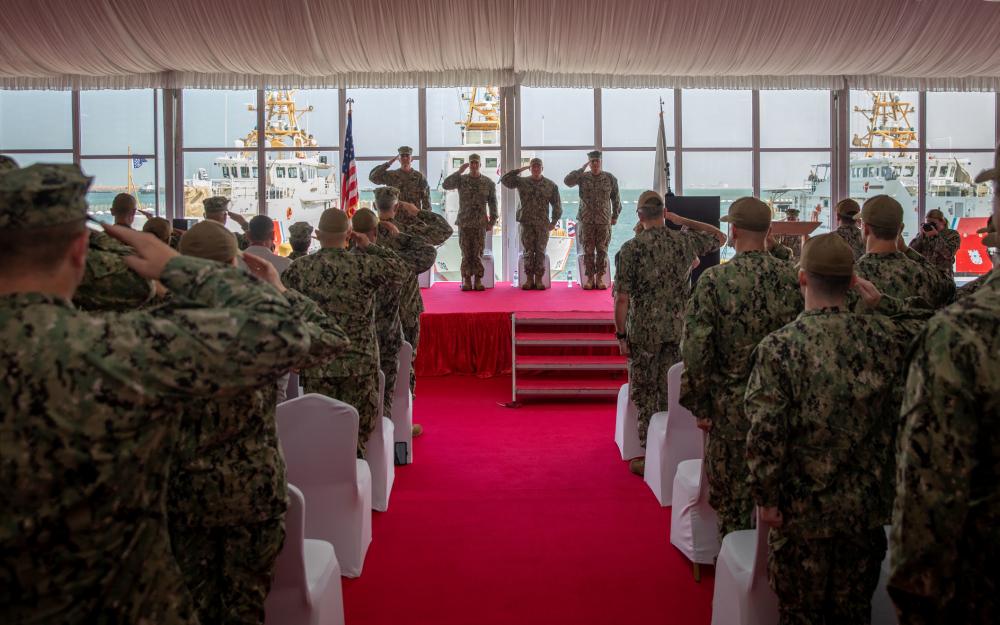 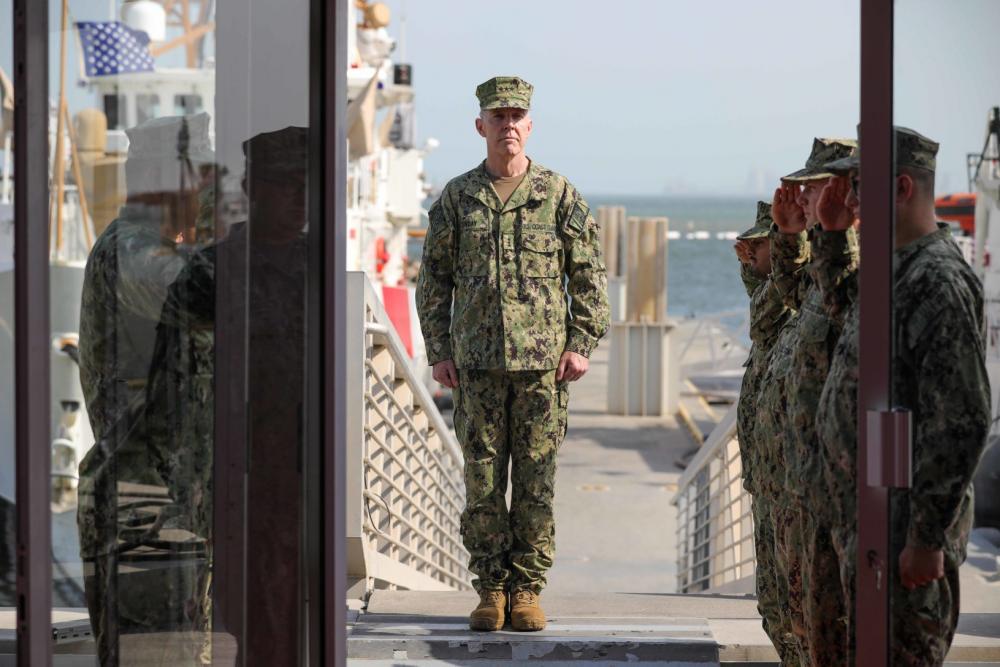 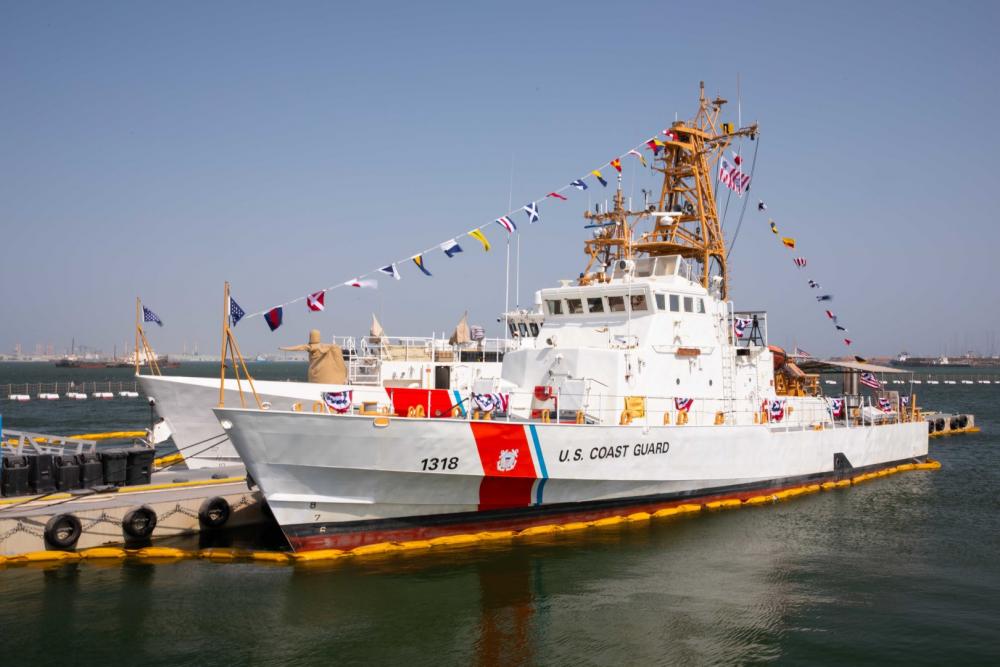 “USCGC Baranof’s exemplary service to our nation is a testament to both the Island-class platform and the crews that have manned Baranof over the past 34 years,” said Lunday. “Whether it was conducting law enforcement and search and rescue in the Caribbean, or deploying to the present-day homeport of Bahrain to support U.S. Central Command, those that have manned Baranof have continually met the needs of America.”

Baranof was commissioned into service on May 20, 1988 at Coast Guard Base Miami Beach in Miami. The 18th of 49 Island-class patrol boats, Baranof received orders to the U.S. Fifth Fleet area of operations in support of Operation Iraqi Freedom in 2002. Shortly after their arrival in Bahrain, Baranof’s crew was underway conducting maritime interdiction operations in the North Arabian Gulf.

PATFORSWA, the Coast Guard’s largest unit outside of the United States, oversees the cutters in Bahrain. The ships are forward deployed to U.S. Fifth Fleet to help ensure maritime security and stability across the Middle East. The 154-foot long vessels feature advanced communications systems, and improved surveillance and reconnaissance equipment. 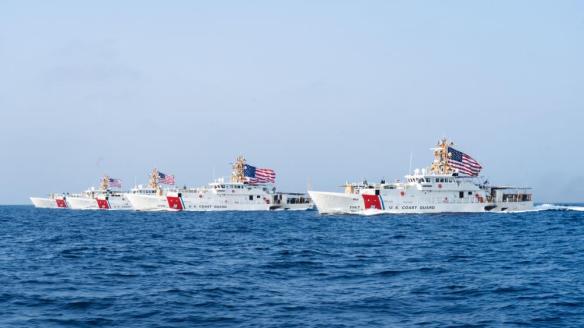 The planned six Webber Class contingent for PATFORSWA is now complete. See the press release below.

“This arrival represents the culmination of years of tireless effort and exceptional teamwork,” said Capt. Eric Helgen, commander of Patrol Forces Southwest Asia (PATFORSWA). “These newest FRCs bring us to our full complement of six ships and mark the beginning of a new era of extraordinary maritime capability supporting U.S. 5th Fleet.”

The Sentinel-class cutters in Bahrain are overseen by PATFORSWA, the Coast Guard’s largest unit outside of the United States. The ships are forward-deployed to U.S. 5th Fleet to help ensure maritime security and stability across the Middle East.

“We are extremely excited to be here and look forward continuing to work with international partners in the region,” said Lt. David Anderson, commanding officer of Clarence Sutphin Jr. “Completing this more than 10,000-nautical-mile transit to Bahrain has been a once-in-a-lifetime opportunity.”