The US Naval Institute Proceedings has a short article that is available on line here. It not only advocates for an Arctic Fleet, but also explains why it has not happened, but suggests the operation of the 4th Fleet as an organizational model.

“…While naval forces are not permanently assigned to Fourth Fleet, the organizational structure remains in place both to support force assignment and to represent Navy interests in the region. The same can be true in the Arctic.

“This new Arctic Fleet can be established in a step-wise fashion, tailored across time and married to changing force structure. A sensible first step would be to augment the small Navy staff assigned to AlCom (Alaska Command–Chuck). Subsequently, in the mid-term, a joint inter-agency task force (JIATF) could be established out of the AlCom office, as resources and activity grew. Certainly, this JIATF would include the Coast Guard, but it also should include liaison officers from Canada, Norway, and other key allies. Ultimately this fleet would be stood up and merged with the NorthCom’s NCC. The Arctic Fleet could be commanded by, for example, either a Navy reserve admiral or a Coast Guard admiral.”

If we could get it to work:

This might end up looking a lot like 4th Fleet where the COCOM says all my ships are white with a racing stripe.

Why the 4th Fleet Model probably will not work:

The proposed inclusion of “Norway and other key allies” seems to suggest that the author sees a single fleet working out Alaska Command (ALCOM), but while NORTHCOM includes Arctic waters as far east as the West coast of Greenland (which is a “constituent country” of the Kingdom of Denmark), realistically, there will be ships based in the Atlantic, and ships based in the Pacific, and the two are unlikely to have much interaction. Arctic waters that connect to the Atlantic are closely connected to NATO and LANTFLT operations. Operations in those areas would not logically come under the control of a small Naval staff in Alaska. Our Arctic Fleet would mostly be needed for the Pacific/Arctic/Alaska. The proximity of Russia and China reinforce the point.

There are at least two major problems in overcoming “the way we have always done things” in making this happen.

The Arctic, note the US includes the Aleutians and the Bearing Sea as part of the Arctic even though they are below the Arctic Circle 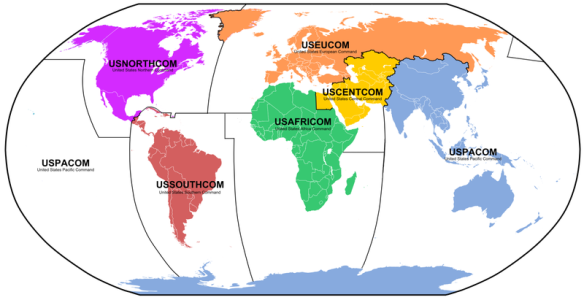 These are the Unified Combatant Commander’s Areas of Responsibility. Note Alaska in the extreme upper left 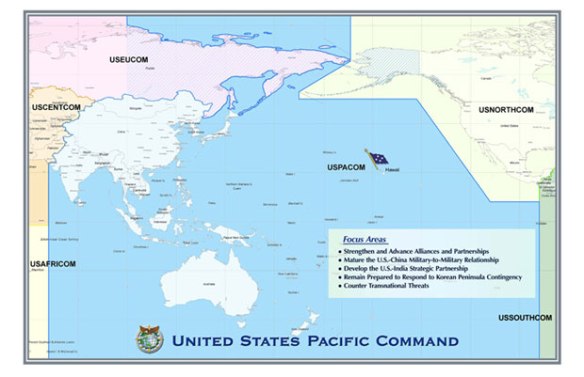 PACOM Area of Responsibility. Note all of Alaska is outside PACOM AOR, even though they are nominally 3rd Fleet waters.

The most likely areas of operation for an Arctic Fleet, the Bearing Sea and the Chukchi Sea, are split between PACOM and NORTHCOM. The most critical choke point in the entire area, Bearing Strait, is similarly split.

Another potential hang up is that the Navy has three primary organizational subsets.

Carrier strike groups and amphibious ready groups are in high demand and are rotated through customary assignments to 5th, 6th, and 7th Fleet. If you look at the USNI fleet tracker reports on a regular basis, you will see that there is never a sufficient number of Navy ships deployed to Fleet Forces, 3rd Fleet, or 4th Fleet to actually constitute a “fleet.”

Only submarines operate normally as single units and even they are frequently assigned to support CSGs.

Rarely, the Navy has dispatched groups of destroyers and frigates (when they had them) as “Surface Action Groups” (SAG) but generally these are fully committed to support of carrier strike groups.

Make Alaska part of USPACOM. It is the only way to rationalize this as an area of potential Combat.

8 thoughts on ““Charting the Course: the U.S. Needs an Arctic Fleet”–USNI/Why We Never See the Navy In Alaska”