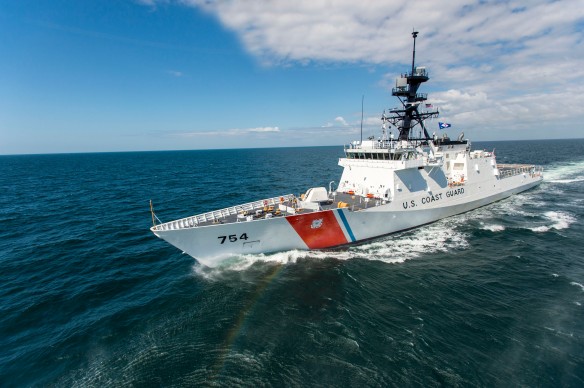 The Acquisitions Directorate (CG-9) reports award of production contracts for the tenth and eleventh National Security Cutter. While some of the cost was already covered in procurement of long lead time items. The price looks good.

The Coast Guard awarded a fixed-price contract option to Huntington Ingalls Industries Inc. of Pascagoula, Mississippi, today for the production of the 10th and 11th national security cutters (NSCs). The option exercised is valued at approximately $930 million.

The 10th and 11th NSCs will be built at Huntington Ingalls Industries’ shipyard in Pascagoula.

Six NSCs are currently in service. Coast Guard cutters Hamilton and James are stationed in Charleston, South Carolina, and Coast Guard cutters Bertholf, Waesche, Stratton and Munro are stationed in Alameda, California. The seventh NSC, Kimball, will be commissioned in January 2019 in its Honolulu, Hawaii, homeport. Midgett, the eighth cutter, is planned for a 2019 delivery; it will be the second NSC stationed in Honolulu. The ninth cutter, Stone, is slated for delivery in fiscal year 2021.