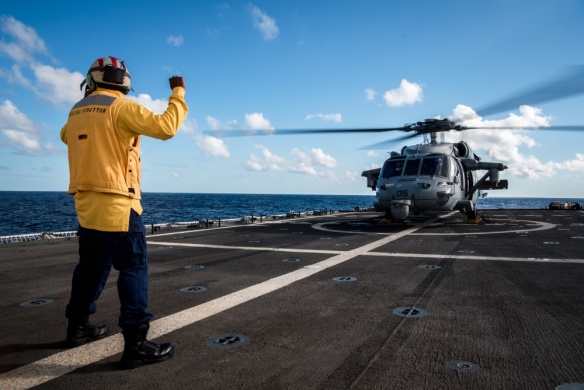 Below is a press release regarding USCGC Stratton’s participation in Exercise Tallisman Sabre 2019 hosted by the Australian Navy. This is a large biannual exercise. For the first time, Japan’s newly formed amphibious brigade participated in the amphibious landings as well as two Japanese ships.

“Exercise Talisman Sabre will involve more than 34,000 personnel from Australia and the United States.

“Forces from Canada, Japan, New Zealand, and the United Kingdom will be embedded alongside Australian Defence Force personnel, and delegations from India and the Republic of Korea will observe the exercise. Eighteen nations from across the Indo-Pacific region have also been invited to an international visitors program.”

The U.S. Coast Guard participated in Talisman Sabre 2019 in July, a bilateral exercise held every two years between the U.S. and Australia, and this year’s exercise marked the first for the Coast Guard since the exercises first began in 2005. TS 19 was designed to train U.S. and Australian forces across high-end, mid-intensity warfighting scenarios and to improve combat training, readiness and interoperability. This exercise illustrated the U.S., Australian alliance and the strength of military-to-military relationships in the eighth iteration of the exercise.

One of the Coast Guard’s primary roles in TS 19 was to serve as a forward screening vessel. As the force moved north, Stratton was sent as an advanced unit to help identify possible landing areas for amphibious operations and to ensure the water north of the force was clear of threats before the force moved in behind Stratton. The crew of Stratton used air and surface assets to conduct searches as part of the forward screen.

“We’re learning about what it means to be a part of this exercise – where we’re falling short, where we have capabilities to add and where we don’t,” said Dunlevy.

Stratton is currently the only Coast Guard cutter that has small unmanned aircraft system (sUAS) capabilities permanently attached the ship. The sUAS is capable of flying more than 16 hours, has a maximum speed of 60 knots and can provide real-time data to the ship to provide intelligence, surveillance and reconnaissance.

This capability allows the Coast Guard to provide real-time surveillance to battle staff and exercise planners, and it allows them to explore the skills and expertise the Coast Guard can bring to both exercises and real-world scenarios.

The Stratton is the Coast Guard’s third national security cutter (NSC) and is homeported in Alameda, California. National security cutters are the Coast Guard’s key interoperability platform in the afloat arena. NSCs are capable of executing challenging operations, including supporting maritime homeland security and defense missions, as well as operating in open ocean environments and supporting international partner agencies.

“Talisman Sabre was key to the U.S. and to the Coast Guard because we were able to exercise relationships with our international partners, to conduct training necessary and to help maintain regional security, peace and stability,” said Dunlevy.

“We will provide an after-action report detailing how we were employed and how we think we could better add to the exercise next time,” said Dunlevy. “We hope the Coast Guard is invited back for the next Talisman Sabre. This has been a huge win for the Coast Guard.”