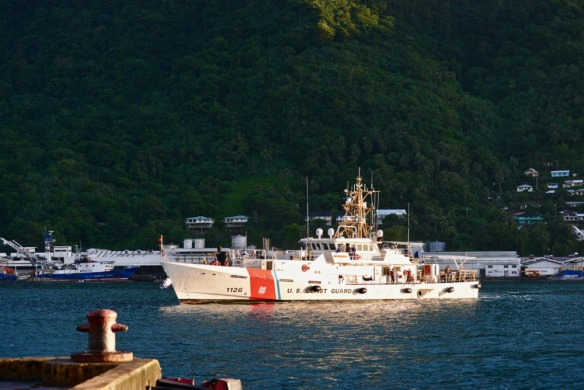 Breaking Defense has an oped from Bollinger President and CEO Ben Bordelon, who also serves as chairman of the Shipbuilders Council of America. We all know, he has a financial interest in additional cutter construction, but that does not mean he is not right. After decades of neglect, the Coast Guard can use some influential support, and the mission is important. With permission from Bollinger, I am publishing it in full below.

For decades, China has deployed its fishing fleet – the largest in the world – as a maritime militia, systematically asserting and expanding Beijing’s influence throughout the Indo-Pacific.

The fleet routinely operates in areas where there is little to no enforcement and willfully engages in aggressive, predatory practices to intimidate lawful local fishermen, undermine maritime governance, and destabilizing the global blue economy.

China is not alone in these actions. Illegal, Unreported and Unregulated (IUU) fishing occurs under a number of flags. The practice is so pervasive, in fact, that one in five fish caught around the world –  between 11 million and 26 million metric tons of fish – is done illegally, robbing legal fishermen of tens of billions of dollars every year. But IUU is first and foremost a maritime and national security threat. The erosion of global norms and standards by the Chinese is a direct affront to global stability and threatens the ability of sovereign nations to manage and defend their resources. (One of the most easily understood examples for Americans would be the predations that occur in Bahamian waters by fishermen from the Dominican Republic and other countries.)

The Coast Guard is uniquely positioned for this and similar missions, not just in the Pacific, but across the globe. The Coast Guard occupies the sweet spot on the diplomatic spectrum between the State Department on one end and the Department of Defense on the other. The distinctive white hulls and red racing stripe of the Coast Guard are able to move through international waters and Exclusive Economic Zones without being viewed as overly aggressive or provocative, making them a prime candidate for cooperative policing and security. They can deescalate and mitigate, without their simple presence escalating the situation. They symbolize safety, maritime order and the protection of economic and environmental resources.

Across Asia, as China continues to grow economically and militarily, we’ve seen countries shy away from traditional joint naval operations in the region for fear of drawing Beijing’s ire – or worse armed conflict. White hulls, however, have been embraced as a much better alternative with an intrinsic freedom for positive cooperation that cannot be confused or conflated with aggression.

IUU fishing has replaced piracy as the leading global maritime threat and often is connected with other illegal activities, including human trafficking, forced labor and narcotics trafficking. Last year, U.S. Coast Guard Pacific Area Commander Vice Admiral Linda Fagan stated that Washington intends to engage in “law enforcement and capacity-building in the fisheries enforcement realm.” Earlier this month, the Coast Guard made good on its commitment and released its first IUU Fishing Strategic Outlook, which outlines its efforts to combat IUU fishing over the next decade.

The Coast Guard identifies enhanced enforcement operations and expanded multilateral cooperation as the keys to countering IUU. To successfully conduct this mission, the Coast Guard will be relying heavily on its growing fleet of small and medium high-endurance vessels.

Earlier this year, the first of three 154’ Sentinel Class Fast Response Cutters were sent to Santa Rita, Guam where they will be stationed in support of Operation Aiga in an effort to strengthen island nations in Oceania, including through fishery patrols and enforcement. Commandant of the Coast Guard Adm. Karl Schultz has acknowledged the importance of this homeporting, saying, “by placing an ocean-going Coast Guard buoy tender and FRCs, we will promote ‘rules-based order,’ build capacity and affirm the United States’ positive and enduring role in the region.” Schultz has also said that “you’re going to see more of those vessels in those parts of the world.” This is in line with and affirms the emphasis the United States set in its 2018 National Defense Strategy on countering U.S. strategic competitors and adversaries.

The Coast Guard has the opportunity to establish itself as the preferred partner in the region. Already it has successfully embarked on a number of joint initiatives, such as its Theater Security Cooperation effort and Shiprider program, that combine efforts with partner nations to build cooperation and goodwill with defense and security capacity building, while simultaneously meeting development goals and furthering the strategic objectives of the United States and its allies. In a dynamic global arena, the Coast Guard continues to successfully demonstrate that white hull diplomacy should be looked to more and more as a complementary arrow in the whole-of-government quiver.

Should the Coast Guard’s mission continue to expand, the maritime defense industrial base stands ready to construct and deliver the high-quality and high-endurance vessels necessary to carry out and perform the mission at hand. This community is dedicated and available to modernize, maintain and expand the U.S. fleet.

Patrolling the vast reaches of the Pacific, as well as patrolling its home waters, may require a larger fleet as the expanded presence of white hulls around the globe helps further the regional partnerships and alliances necessary to curb the creeping influence of America’s strategic competitors and adversaries and reaffirm its leadership and commitment to rules-based order and maritime governance around the world.