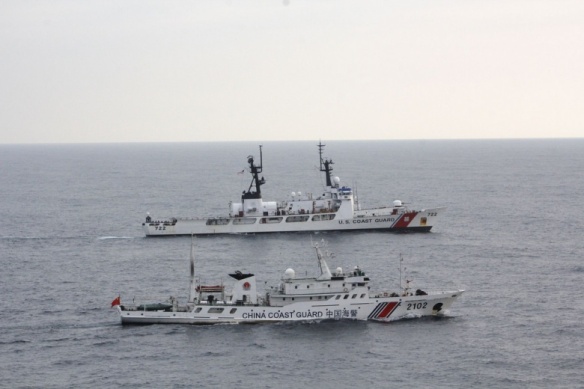 The US Naval Institute news service provides a translation of a Chinese review of the Tri-Service Naval Strategy, “Advantage at Sea.”

It is, in my view, a surprisingly even handed evaluation. Not that it does not reflect the Chinese position, but it is at least fairly accurate.

One particular paragraph references the US Coast Guard.

Third, the U.S. will also introduce a new style of struggle, namely, it will bolster competition in the “gray zone.” That is, the U.S. will take greater action in the domains of social media; supply chains, especially defense industry chains; and space and cyber. A fairly obvious early indicator of this was that the USCG—which traditionally operates in the vicinity of the U.S. coast to defend the security of U.S. territory—has recently moved forward into the South China Sea region. It is preparing to conduct military operations in the South China Sea, with the aim of striking China’s maritime forces as well as bolstering joint law enforcement with regional states in the South China Sea, in order to respond to China’s South China Sea rights protection operations.

The idea of the USCG moving into the South China Sea “with the aim of striking China’s maritime forces” is a bit far fetched, but the rest is reasonably accurate and reflects the Strategy’s recognition of the Coast Guard as uniquely qualified to counter aggression in the “Gray Zone.”