The US Naval Institute News Service has a short post about a system that will reportedly detect and if required jam the radio frequency signals that control small Unmanned Air Systems like the commercially available hobby drones and similar control systems that might be used on larger UAS.

We noted the presence of this or a similar system on the Webber class cutters being transferred to PATFORSWA in February.

While there are autopilots that allow drones to travel considerable distances to reach fixed geographic points, operating drones that lack autonomous targeting, against moving targets, typically require two radio frequencies, one the video link from the drone back to the operator and one to control the drone, from the operator back to the drone. Jamming either of the frequencies would probably disable the drone. Generally these frequencies are UHF or VHF, limited to line of sight. 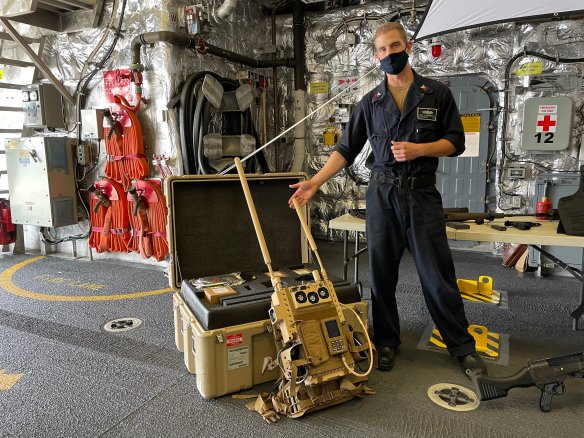 If you expand the photo of USCGC Charles Moulthrope above, you can see a similar system, with its two vertical antenna of different sizes, on the mast port side, slightly below and behind the port blue flashing light, and above and inboard of the small round fixed air search radar antenna.