Coast Guard Base Charleston. The Base is moving from this location to the former Charleston Navy Base

I have added it to my Heritage Page, but there was an interesting note in the next to last paragraph discussing the recent past and future of Base Charleston,

“In October 2015, the North Charleston cutter base was officially commissioned as Coast Guard Base Charleston with new National Security Cutters Hamilton and James replacing the old Gallatin and Dallas. The recently commissioned National Security Cutter Stone has joined its two sister cutters and future plans see the facility becoming a “super base” supporting two more NSCs, as well as units of the new medium-endurance class of Offshore Patrol Cutters and, possibly, one or two new Polar Security Cutters.” (Emphasis applied–Chuck)

We have begun to see indications of an intent to base icebreakers on the Atlantic side, but I had assumed these would be the Medium Icebreakers (Arctic Security Cutters). This may reflect an anticipation the Coast Guard will have more than three Polar Security Cutters.

When you realize that, in relationship to the Eastern Pacific Drug Transit Zone, Charleston is about 1,000 nautical miles closer than San Diego and about 1,400 nautical miles closer than Alameda, you can understand why the Coast Guard decided to base five Bertholf class NSCs there. Its why 4th Fleet, which is responsible for all of South America is an Atlantic Fleet Command.  Add to that the lower cost of living and it makes a lot of sense. 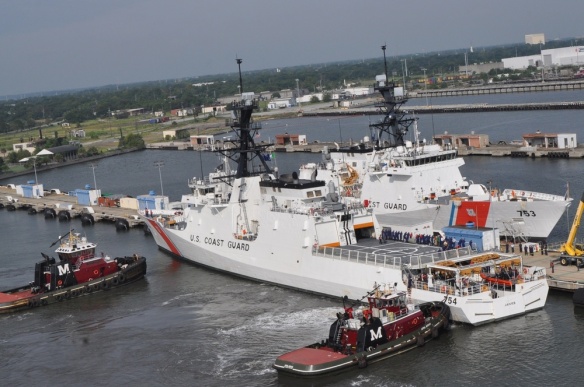