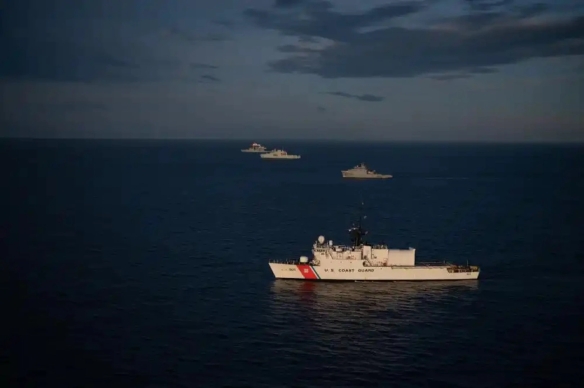 MyCG has a story about the experience of personnel manning USCGC Bear’s CIC during Operation Nanook. There were some statements that surprised me.

“There were a lot of ways we were pushed as a team within the operations department,” he explained. “For me, I think it was getting acclimated with being on a cutter after being an ‘OS’ at a sector for most of my career. Being underway was really uncharted territory for me, no pun intended. Communications, especially the use of tactical signals to pass important information from ship-to-ship, was completely new to me with nearly 17 years of experience. But I would gladly do it again if I had the chance.”

How is it that we have an OS1, 17 years in the service, and he has never been afloat before?

Learning tactical signals, or TACSIGS, Gordon refers to was no small feat either. TACSIGS are a lost form of communication the Coast Guard no longer teaches. Only as a result of CIC’s collective brain power was Bear able to engage in close-quarter maneuvering with other ships in the convoy— often times, only at moment’s notice.

I know cutters seldom work with other warships, but it is a basic skill required of a CIC. Screwing up tactical signal will at least embarrass the ship, at worse the ship may be run over by an aircraft carrier–it has happened more than once.

And then there was this,

The unreliable internet capabilities to carry out critical tasking also challenged the crew.

You are depending on internet to coordinate operations? You can’t expect that to work when you need it most, and where is EMCON?

Sounds like the OS rating has proven so useful, and so many of the OS billets are now ashore, that the rating’s skill set has drifted away from those required afloat. Sounds like we have a problem. Maybe we need to split the rating? Create an OS like rating for those that serve exclusively ashore? Or else a special school to bring OSs going afloat up to speed?