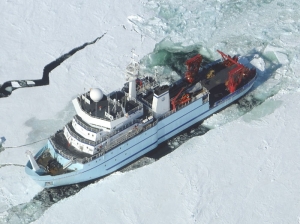 The Marine Log is reporting the delivery of a new ice capable research vessel to the National Science Foundation.

The 261-foot double-hulled vessel will be stationed at Seward Marine Center, its homeport in Seward, Alaska, where it will be tasked with year-round operation. The Sikuliaq is the first vessel in the U.S. academic research fleet capable of breaking ice up to 2.5 feet thick, making it uniquely equipped for polar and sub-polar research.

Earlier we talked about this ship, and the possibility of adapting the design as an Artic Patrol Cutter. My 2011 post includes a bit more detail about the ship. You can read it here.