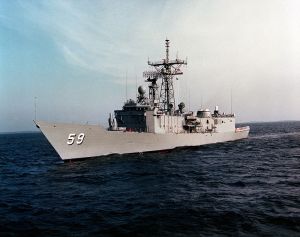 The Navy Times is reporting that USS Kauffmann (FFG-59) is departing for what is expected to be the last deployment for a US Navy Oliver Hazard Perry class frigate, and it will be a “Counter Transnational Organized Crime/Counter Illicit Trafficking mission” meaning it will almost certainly have a Coast Guard team aboard.

The 51 ships of this class have frequently supported USCG Coast Guard Law Detachments and operated under Coast Guard authority. Ultimately Littoral Combat Ships (LCS) and Joint High Speed Vessels (JHSV) will replace them in these missions, but right now, the decommissionings seem to be coming much faster than the replacements. Meanwhile far fewer assets are available than required to move on actionable intelligence despite of the fact that this is the most efficient method of interdicting drug traffic.

6 thoughts on “End of an Era, Last Frigate Cruise for USN & LEDET”