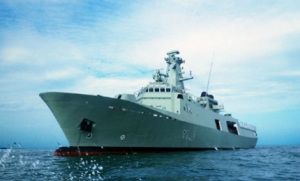 Another country has begun procuring ships similar to my proposal for “Cutter X.” In this case it is four vessels for the Sultanate of Oman. The program is already well underway. Naval Technology reports two of the four ships have already been accepted and the remaining two should be delivered by the third quarter of 2016. Total cost was reportedly approximately $700M.

It appears that this class may have provided the basis for the design of Singapore’s slightly larger “Littoral Mission Vessel,” (LMV) we talked about earlier, the first of which was launched in July.)

These ships are intended to replace four much smaller 25 meter (82 foot) Al Seeb class patrol boats. In fact it appears that they will receive the names of the vessels they replace.

A clear view of the ships mast, bridge, and electronics can be seen here.