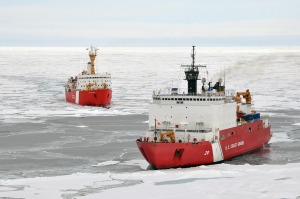 If you would like to take a look at the Operational Requirements Document (ORD) for the proposed polar icebreaker (PIB in the document), you can find it here (pdf). (Sorry I did not publish this earlier.)

The bad news is that it does not look like it will be fully operational until 2028.

Here are the basics. I have cherry picked the list. There are many more requirements, but I think these are the most significant:

Additionally it should be able to conduct boat and helo operations to Sea State Four (8.2 feet/2.5 meters)

COMMENTS: I would like to offer some comments on the document.

Inclusion of “dedicated location(s) and reserved space, weight, power, hotel services, data network and phones to accommodate six 10 ft x 20 ft science vans that do not interfere with flight deck operations.” (3.1.16.6 page 29) is promising. It offers an avenue to address emerging requirement or the need for capabilities that might might have been unrecognized. In addition to scientific support they might be used for humanitarian assistance/disaster relief, as holding cells, as class room space, for upgraded communications, accommodations, or medical facilities.

If we are going to be able to operate, hangar, and service Navy H-60s, we also need to be able to store their associated weapons and equipment including sonobuoys and torpedoes. I suspect this means we will need more space (and perhaps specialized space) than required to support CG H-60s (which I doubt will ever deploy on the PIB anyway). The containerized mission modules might be one way to address this if the need arises.

Polar Icebreakers will undoubtedly go to Antarctica so the Antarctic Treaty will apply.  Contrary to what you may have heard, the treaty does not require that ships entering the area be unarmed, only that they be open to inspection. Article VII para. 3. “All areas of Antarctica, including all stations, installations and equipment within those areas, and all ships and aircraft at points of discharging or embarking cargoes or personnel in Antarctica, shall be open at all times to inspection by any observers designated in accordance with paragraph 1 of this Article.”

Obviously we do not want to send the PIB down there mounting classified weapons. The document addresses this by saying, “The PIB shall have the capability to employ removable weaponry.” This might mean only .50 caliber machine guns like the Polar Class, but there is also an operational requirements in table 6 (PIB Activities, page 11) is “Stop/neutralize a vessel through the use of force continuum.” Notably this is in the group “Boarding Operations” rather than Defensive/Offensive Operations.

If  we are going to enforce US sovereignty and ” the ability to conduct disabling fire against surface targets” is not limited to surface targets powered by outboard motors, the ship will need something more. There is also a strong possibility that the target could outrun a 15 knot PIB so we either need to be able to do this at a distance, or using the ship’s boats or helicopters.

Ultimately all weapons are removable. In some cases, like missiles or torpedoes the launchers themselves may be unclassified as long as the weapon itself is not installed.

The LCS classes have incorporated removable weapons in their design with reconfigurable weapon stations. We might consider something similar for the PIB,

In wartime, if fighting is in the Arctic or Antarctic, the polar Icebreakers will be unique high value naval auxiliaries that may become critical to naval operations. They will need to be adequately protected. We might consider fitting them “for but not with” defensive weapons. A minimum of two Mk38 25 mm and two SeaRAM CIWS appears to be appropriate, while requiring a minimum impact on command and control and manning requirements.

Photos: A removable weapon system. The Mk46 Gun Weapons System. This is used in the LCS anti-surface mission module. The armor piercing, fin stabilized discrding sabot round would probably be effective as a disabling round against even large diesel engines.

It is a pretty large document, running 89 pages total. The last 17 pages are appendices. Reportedly it was the product of a “46-member, 11-Agency Integrated Product Team (IPT)” There is a lot of detail, but there are also a lot of statements that are so nebulous as to be meaningless and as far as I can see do not contribute to an understanding of the requirements. This applies to most of the capabilities listed in Table 5 on page 9 and virtually all of the following,

Perhaps I have missed something or these will be clarified in the future.