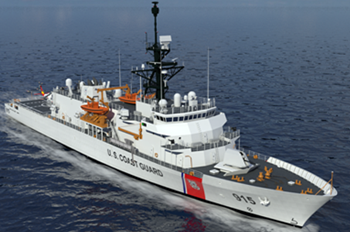 Coast Guard public affairs asked me to take down this post, as previously written, because “The page was still under construction and not meant for public release.” The page that provided the information is no longer accessible.

That would seem to explain the gaps in the explanation of the significance of the names to Coast Guard history that I noted.

My comments about the type designations stand.

I am once again reminded how much I hate the WMSM and WMSL designations. They violate all the norms of ship type designation. Why don’t we just designate both class WPF–Coast Guard Patrol Frigate. The 75 Coast Guard manned frigates of WWII were designated PFs. It might even help the Commandant’s plea, that the Coast Guard be funded as a military service, if the vessel descriptions sounded more like warships.