The procurement process for the Offshore Patrol Cutters is well underway. Three conceptual designs have been selected for further development. Challenges to the selection process have been rejected. There should be decision on the final design and contractor about the end of next year.

Perhaps the ships might feel closer to reality if there were a class name. I like the fact that we have been naming ships for notable figures in the history of the Coast Guard and its predecessor services as was done for the Bertholf and Webber Class cutters. Lets continue that with the Offshore Patrol Cutters.

Our friend Bill Wells tells the story of First Lieutenant, Frank H. Newcomb (Captain Commandant upon retirement), CO of the Hudson when it towed the Navy torpedo boat Winslow to safety from under Spanish guns in the port of Cardenas, Cuba during the Spanish American War.

Newcomb was honored by the Navy as namesake for a Fletcher class destroyer, DD-586, USS Newcomb. She had a short but eventful history. In spite of not being commissioned until November 1943. She and another ship sank the Japanese submarine, I-185. She provided naval gun fire support at Saipan, Leyte, Iwo Jima, and Okinawa. As flagship of destroyer squadron 56, she lead a night torpedo attack on a Japanese Fleet during the Battle of Surigao Strait. She scored at least one torpedo hit on the Battleship Yamashiro, which was sunk in the battle, and like her namesake, while under fire, she towed a damaged ship, USS Albert W. Grant (DD-649), to safety. Off Okinawa she survived five (or six) Kamikaze hits. 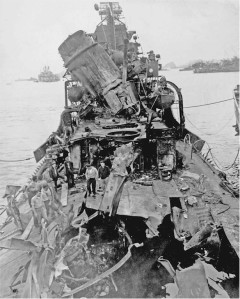 USS Newcomb, DD-586, after taking at least four and possibly as many as six kamikaze strikes

Newcomb’s career was not limited to his time on the Hudson. This short biography (pdf) by Atlantic Area Historian William H. Thiesen also talks about his peacetime leadership, and how Admiral Waesche personal chose Newcomb as namesake for a destroyer as the best representative of the Coast Guard.

“While Newcomb distinguished himself commanding a cutter in battle, he spent much of his career working as a field officer and inspector for the United States Life-Saving Service. Throughout his career, Newcomb championed the rights of those whose efforts merited recognition and promotion. For example, when he had received the medal for his wartime exploits, he insisted that Hudson’s crew receive specially struck medals as well, and the cook and stewards mate became the first African Americans to receive such recognition.

“Many in the Coast Guard as well as the general public have heard the story of the service’s only African American Live-Saving Service crew, which manned North Carolina’s Pea Island Life-Saving Station beginning in 1880. Few may realize that it was locally assigned U.S. Life-Saving Service inspector, Lieutenant Frank Newcomb, who worked diligently behind the scenes to institute an African American crew at that station. In fact, the local community opposed the establishment of an African American manned lifesaving station and arsonists burned down the original station. Newcomb had to camp out at the remote site of the burned out Pea Island station during construction of a new building to prevent sabotage a second time. While no one should diminish the accomplishments of the Pea Island Station’s courageous African American crew, it was Newcomb who risked his career and reputation to institute Pea Island’s African American crew in the racially-charged South following the Civil War.”

There has never been a Coast Guard vessel named for Newcomb. I think it is about time.

If you have any other suggestions for namesakes for the class, please add them in the comments section.