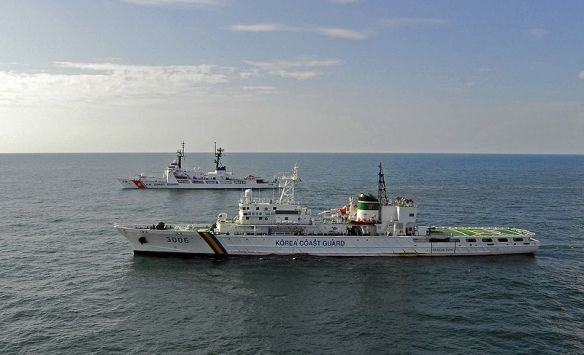 Republic of Korea Coast Guard vessel #3006 in company with U.S. Coast Guard cutter USCGC Boutwell (WHEC-719) during the North Pacific Coast Guard Forum in August 2007. This forum was created to increase international maritime safety and security in the Northern Pacific Ocean and its borders. The Boutwell worked with the Korean coast guard while on their way to Yokosuka, Japan. The Japanese coast guard is one of the six nations involved in the forum.

We previously noted there might be a Coast Guard role in enforcing a possible blockade of North Korea. It now appears that the Administration is planning additional action to enforce existing UN sanctions on North Korea and the Coast Guard, including ships as well as boarding teams may have a role.

Bertholf class NSCs would of course be the most desirable asset, but there just are not many of them. Perhaps FRCs? Whatever is used will need some overwatch, perhaps in the form of Maritime Patrol Aircraft.