The US Naval Institute News Service has provided access to the second “Annual Report to Congress for the Littoral Combat Ship (LCS) Mission Module Program.” Some of these systems should be of interest to the Coast Guard, either as regular equipment for peacetime law enforcement and counterterrorism missions, for temporary use, as in the case of a naval mining incident, or as wartime add-ons if the Coast Guard is mobilized for a major conflict.

Keep in mind, the procurement cost of these systems would presumably come out the Navy budget. The Mine Countermeasures (MCM) Mission Packages (MP) has already been addressed. 24 are planned including nine to be built for “Vessels of Opportunity.” These nine extra packages probably meet any peacetime augmentation requirement and provide a reserve for mobilization. Testing is expected to continue through FY 2022. Production is expected to continue well into the future as less than half the packages will have been delivered by FY2023.

An earlier post discussed the possibility of using mission modules and Navy reservist to augment large cutters. In a protracted conflict against a near peer naval power like Russia or China, our large patrol ships are most probably going to be needed to perform open ocean ASW escort duties.

Only ten ASW Mission Packages are planned. Initial Operational Capability (IOC) is expected in FY 2019, but testing will continue through 2020. The Multi-Function Array is already a fielded system. Deliveries are expected to begin in FY2021 at a rate of two systems per year. If that rate is continued, the ten planned systems will be complete in 2025.

At an estimated cost of less than $20M the ASW Mission Package is the least expensive of the three types of Mission Packages. Adding this system as a mobilization capability or perhaps even as a peacetime capability to 35 or more large cutters would provide a higher return on investment than just about any other Naval program.

As I have noted before, the Coast Guard has a potential need to be capable of countering terrorist efforts to use a wide spectrum of vessels to make an attack. These craft range between small, fast, highly maneuverable boats on one extreme, to large ocean going vessels at the other. Our ability to counter these threats must be widely available, quickly effective, and have both a probability of success approaching 100% and do so with minimal danger to innocents who may be in the vicinity. Guns do not meet these criteria.

Hellfire missile have the potential to meet these criteria, at least against the lower half of the threat spectrum, and, using more than one round, might have a degree of success even against the largest vessels.

Apparently the SSMM Longbow Hellfire testing is going well, with 20 out of 24 successful engagements, and there’s a software fix for the root cause of the 4 failures. 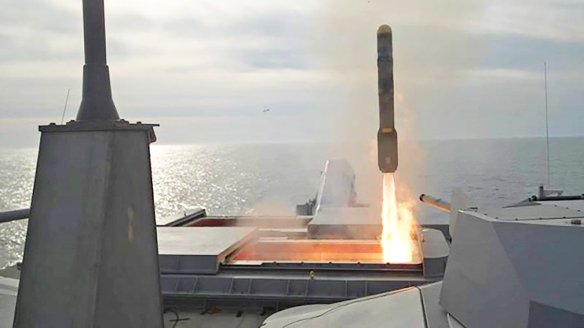 ATLANTIC OCEAN—A Longbow Hellfire Missile is fired from Littoral Combat Ship USS Detroit (LCS 7) on Feb. 28, 2017 as part of a structural test firing of the Surface to Surface Missile Module (SSMM). The test marked the first vertical missile launched from an LCS and the first launch of a missile from the SSMM from an LCS. (Photo by U.S. Navy)

A recent US Naval Institute News Service report quoted LCS Mission Modules Program Manager Capt. Ted Zobel “all of our mission packages…are finishing up development, proceeding into test, and then from test into production and ultimately deployment.”

“…surface-to-surface missile module (SSMM) will add a Longbow Hellfire missile to increase the lethality of the LCS. Testing begins this month on USS Milwaukee (LCS-5) and will move to USS Detroit (LCS-7) over the summer. Testing should wrap up by December, Zobel said, with Detroit planning to bring the SSMM with it on its maiden deployment about a year from now. Written testimony from the Navy at a March 6 House Armed Services Committee hearing states that IOC is planned for Fiscal Year 2019.”

The Surface to Surface Mission Module (SSMM) planned for the Littoral Combat Ship, seen above, can store and launch up to 24 missiles. 24 missiles would weigh about 2,500 pounds. As a very rough estimate, Its foot print appears to be about 9×12 feet (late note–a little photo analysis suggest the three mission module positions on each LCS are about 15-16′ square), probably not too large for an NSC, OPC, or icebreaker, but probably too large for the Webber class WPCs where I really think we really need the capability. They are after all, much more likely to be in the right place, at the right time. For them we probably need a smaller system.

In the video above, beginning at time 2m58s there is a model of a 12 meter unmanned surface vessel mounting a four tube Hellfire vertical launch system. Knowing that the Hellfire is only 7 inches in diameter and 64 inches long, it appears this installation would have a footprint of no more than 6×8 feet and probably would be no more than seven feet high. It seems likely we could find a place for one or two of these on each Webber class and at least one when we build the replacements for the 87 footers.

I have often seen missiles compared unfavorably to guns, based on the cost of the projectiles, but cost of providing a system like Hellfire pales in comparison to the cost of a medium caliber gun, its ammunition allowance, and the maintenance, training, and technicians required to keep it operational. Compared to the guns we have used in the past:

While I have never seen it claimed official, I have seen reports that Hellfire can be used against slower aircraft such as helicopters and UAVs.

These small missiles could allow our patrol vessels to hit like much bigger vessels.

The “Gun Mission Module” (GMM) could be one way to arm the icebreakers relatively quickly when needed, while allowing the option of removing the weapons before going to Antarctica if desired.

Production of these units is quickly running its course, and if we want to use these on the icebreakers, it may be desirable to have our needs added to the production schedule before the production is shut down. The last two are expected to be delivered in FY2020.

How important this is will depend on the Coast Guard’s intentions and the alternatives.

Setting up the installations in the same format as found on the LCSs means improvements or alternative systems developed to LCS systems could be easily incorporated in the icebreakers as well.

On the other hand, the included 30mm Mk46 gun weapon system is not limited to the LCSs. It is or will be mounted on the three Zumwalt DDG-1000 class destroyers, 13 San Antonio (LPD-17) class, and probably 13 LX(R)/LPD-17 Flight II class still to be built, about 58 mounts in addition to the 20 planned for the LCSs.

It doesn’t look like it would be too difficult to remove or re-install just the gun mount (seen below) if that would meet our needs. It would of course require a dedicated space, permanent installation of supporting equipment, and a way to seal the opening for the mount long term when the mount is removed. 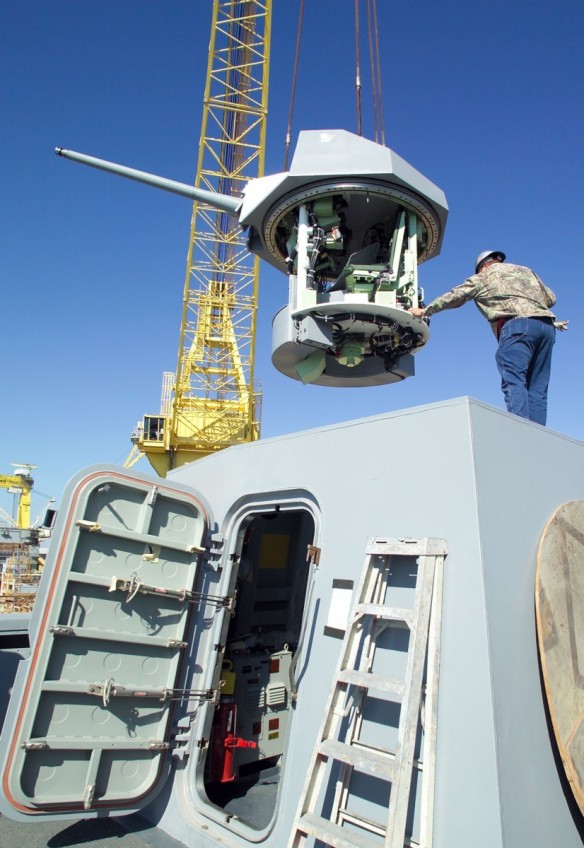 Although it is not as effective as the Mk46 mount, because of the smaller 25 mm gun currently used, the Mk38 Mod2/3 is also an alternative, and has the advantage of already being in the use with the Coast Guard. It is even more widely used, “As of 2016, 307 MK 38 MOD 2 systems have been delivered. There are 50 MK 38 MOD 3s on contract. The total POR (program of record–Chuck) is for 517 systems.”

Still the 25mm gun is markedly inferior to the 30mm in that its effective range is considerably less and the individual projectiles are far less potent. The Mk46 mount also has many more rounds on the mount compared to the Mk38 mod2/3. Upgrading the Mk38s to mount 30mm guns would address much of the current inferiority.

The inferiority of the Mk38 would also be much less of a concern if the Icebreaker had an additional, more powerful anti-surface weapon system, like the Hellfire Surface to Surface Missile Module or Anti-Surface Cruise Missiles. These might be useful if it is ever necessary to provide Naval Surface Fire Support (NSFS) in the Arctic or Antarctic.