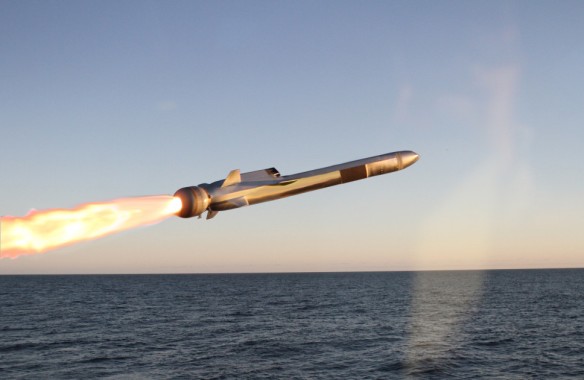 The US Naval Institute News Service is reporting the Naval Strike Missile has been selected to provide the long range surface to surface capability for the Littoral Combat Ships (LCS) and presumably the new frigate as well. This is no surprise since the other two candidates had dropped out of the competition, “…Boeing Harpoon Block II Plus and the Lockheed Martin Long-Range Anti-Ship Missile (LRASM) were both withdrawn by their respective companies from the competition last year. Both Boeing and Lockheed complained that Navy requirements for the OTH missiles did not value the networking capability of their offerings, several sources confirmed to USNI News.”

There are a couple of points to look at here.

The initial contract is for $14,856,016. This reportedly includes, “…encanistered missiles (EM) loaded into launching mechanisms (LM); and a single fire control suite (FCS). This contract consists of EMs (tactical, telemetered and inert operational); FCSs; LMs; mission support equipment, training equipment and courses; engineering services; and travel and other direct costs. This contract includes options which, if exercised, would bring the cumulative value of this contract to $847,611,857.” So it appears the initial contract includes at least one full ship set. The cumulative value is 57 times greater. There are only 52 Small Surface Combatants planned including both LCSs and the projected frigates (FFGs). Given that we would expect the price to go down in a quantity buy, it looks like these missiles may also go on other platforms as well.

We don’t know how many missiles will go on each platform, but Raytheon seems to indicate each LCS will support two quad launchers. While reportedly launchers are available for one, two, three, four, or six missiles, all the installations so far have been in the quad format. “USNI News understands the Thursday award buys about a dozen missiles.” Presumably some missiles will be expended in tests.

It is in targeting where the NSM’s superiority shines compared to the legacy Harpoons..