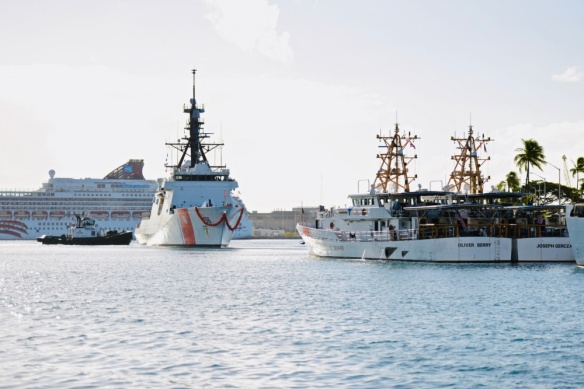 The crew of USCGC Kimball (WMSL 756) arrive in Honolulu for the first time Dec. 22, 2018. Known as the Legend-class, NSCs are designed to be the flagships of the Coast Guard’s fleet, capable of executing the most challenging national security missions, including support to U.S. combatant commanders. (U.S. Coast Guard photo by Chief Petty Officer Sara Muir/Released)

This is going to be an update of a post published 22 Nov. 2015. “Ruminating on Homeports While Playing the Red Cell.” A recently published “National Fleet Plan” prompted that examination. Unfortunately there has apparently been no later edition of this plan. I am going to publish in two parts because was getting a bit long. Part 1 will get us to where we are now. Part 2 will speculate on the future.

Again I will try to identify those ports most at risk of attack, and where the cutters that might protect them are or should be. Much of the organization, logic and even wording of the earlier post will be recycled here. Unfortunately truly current information was not available for each type of port. In some cases the information predated the previous post. I have tried to label the sources and include the year of its publication in parenthesis.

Once again, I looked at this from the point of view of hopefully making an intercept off shore, rather than inside the port, so rather than look at specific ports, in some cases, I clustered ports that had a common approach, e.g. Portsmouth, Norfolk, and Newport News all share a common approach so I grouped them together in what I will refer to as the Chesapeake Bay Complex. Other groups were ports along the Mississippi River, Sabine Pass, Galveston Bay, San Francisco Bay, and Puget Sound. I also disregarded Inland and Great Lakes ports as being protected by the long approach required.

In the original post I was looking to the larger cutters, (NSCs, OPCs, WHECs, WMECs) as the primary protectors of ports, because that was the way the Coast Guard looked at the problem. I have come to believe strongly that Webber class WPCs and perhaps the replacement for the 87 foot WPBs will be much more likely to be in the right place at the right time to counter an attack. The larger ships simply spend very little time underway in the vicinity of their homeports. They spend no significant time on standby (although that could change), and once in port, they usually enter maintenance status, making it difficult, if not impossible, to get them underway promptly in an emergency. That is not to say we will not also look at where the larger ships are based.,

Unlike the previous post, we will look at where Webber class FRCs are homeported. That means this could also be considered a reexamination of a March 2018 post, Homeports 2035.

The larger ships could become significant players in protecting ports if they were equipped with long range Anti-Ship Cruise Missiles (ASCMs) (and here) that could reach from the ships’ patrol areas back to the approaches to the ports.

Terrorists or even state actors could use any size vessel from personal watercraft to 1000 foot long ships.

The Coast Guard would certainly like a comprehensive Maritime Domain Awareness system, but so far we still seem a long way from having one. We still have not gotten the land based Unmanned Air Systems that were supposed to have been part of the Deepwater Program.

Even in best cases, unless we have prior intelligence, we are unlikely to recognize a clandestine threat before it enters the EEZ. Even then it is unlikely to be recognized immediately. At 20 knots that puts the adversary ten hours from his target. It could be more. It could be much less.

In some places Geography works against us. An adversary can get very close to some targets by approaching through Mexican or Canadian waters, before entering the US EEZ.

Right of innocent passage means ships can transit close to the US without the need for a Notice of Arrival.

After initial detection, it is going to take some time to determine that an intercept is needed, and more time to communicated the decision. We cannot expect a cutter to make long transits to affect an intercept, so if the cutter is in or near the port to be protected, we are more likely to be able to make a successful  intercept. Probably if the cutter is not able to get underway and intercept the threat in the approaches in less than five hours, it is probably too far away. I would feel a lot better if it were within two hours.

Ports that may need protection:

Cultural Targets: Since the terrorists targets are more about psychological impact than economic or military significance, attacking certain cities may be more important than the actual damage done. Cities that likely figure large in their psyches are:

Military Targets: Symbols of American military power, that terrorist groups would like to show are not invulnerable. Also important military targets.

Plus, if they could also at least raise the possibility of a spill of radioactive material, so much the better. So nuclear powered ships of any kind are likely targets.

The Navy is increasingly concentrated geographically. Navy ships generally are in maintenance, in training, deployed far from the US. or are in transit. They no longer routinely patrol US waters. This may not be a problem if you can handle a problem with aircraft, but reaction to a vessel that we suspect may be attempting a terrorist attack will almost certainly require investigation, including, most probably, an attempt to board.

The Navy has no surface combatants in the Atlantic Fleet homeported North of Virginia. We cannot rely on the Navy to provide platforms for intercepts, with the possible exception of off San Diego and Chesapeake Bay.

Attacks on Shipyards that build USN ships might also provide an opportunity to strike at US symbols of power. Notable shipyards are BIW in Bath, Me; Electric Boat in Groton, CT; Newport News in the Chesapeake Bay complex, VA; Austal USA in Mobile, AL; HII in Pascagoula, MS; and NASSCO in San Diego, CA.

Cruise Ships: Another likely target for a terrorist is a cruise ship. The Top Cruise Ship Ports (2011) (arranged geographically):

Two ports not listed above, that figure prominently as cruise ship ports mentioned by other sources were the US Virgin Islands and Boston.

Container Ports: Attacking a large container ports might also be seen as a good way to disrupt the economy. Top Container Ports (2009, “updated May 20, 2017”) arranged geographically.

I decided they did not need to be added to the list of ports.

Strategic Ports: Aside from the naval targets listed above MARAD has designated 17 ports for outload of military equipment. These are referred to as “Strategic Seaports” (2020):

Obviously there is some overlap from list to list. Putting them all together and grouping them by district we get 31 potential target ports in bold. Also included are the location 23 current or planned cutter homeports with the cutters in bold.

11 thoughts on “A Reevaluation, Ruminating on Homeports While Playing the Red Cell, Part 1”