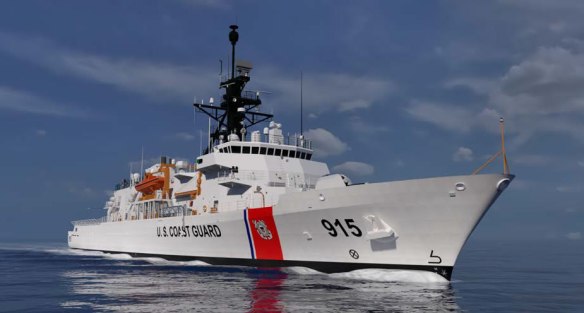 The Acquisitions Directorate has been busy. They report exercising a $317.5M contract option for construction of the first Offshore Patrol Cutter (OPC), USCGC Argus, and long lead time items (propeller and steering components, marine diesel engines, the ship integrated control system, switchboards, and generators), for the second OPC, USCGC Chase. Delivery of Argus is expected in 2021.

They also report exercising an option for long lead time items for an as yet unnamed eleventh National Security Cutter (NSC).

We currently have names for the first nine NSCs.

I am hoping we will name one for Commodore Frank H. Newcomb, who was CO of the Cutter Hudson at the Battle of Cardenas Bay. He really should have gotten the Metal of Honor. It would also give us a nice tie into the Navy since they had a heroic destroyer named for Newcomb.

I also think Walsh would be a good choice. His Navy Cross citation.

WALSH, Quentin R., CDR, (Retired as Captain) USCG, Navy Cross, For heroism as Commanding Officer of a U.S. Naval party reconnoitering the naval facilities and naval arsenal at Cherbourg June 26 and 27, 1944. While in command of reconnaissance party, Commander Walsh entered the port of Cherbourg and penetrated the eastern half of the city, engaged in street fighting with the enemy. He accepted the surrender and disarmed 400 of the enemy force at the naval arsenal and later received unconditional surrender of 350 enemy troops and at the same time released 52 captured U.S. Army paratroopers.