Below you will find a Fifth District news release. It focuses on the actions of the crew of a Coast Guard Air Station Elizabeth City, NC, C-130J during the seizure of a small boat (panga) smuggling cocaine of the coast of Costa Rica, but there is another story here. The vessel they are cooperating with is USCGC Donald Horsley, a Webber class 154 foot cutter, based in San Juan, Puerto Rico. That means she was operating almost 1,300 nautical miles from her home port. These “Fast Response Cutters” continue to exceed our expectations.

Eyes in the sky: one air station’s Herculean efforts to stop drug smugglers 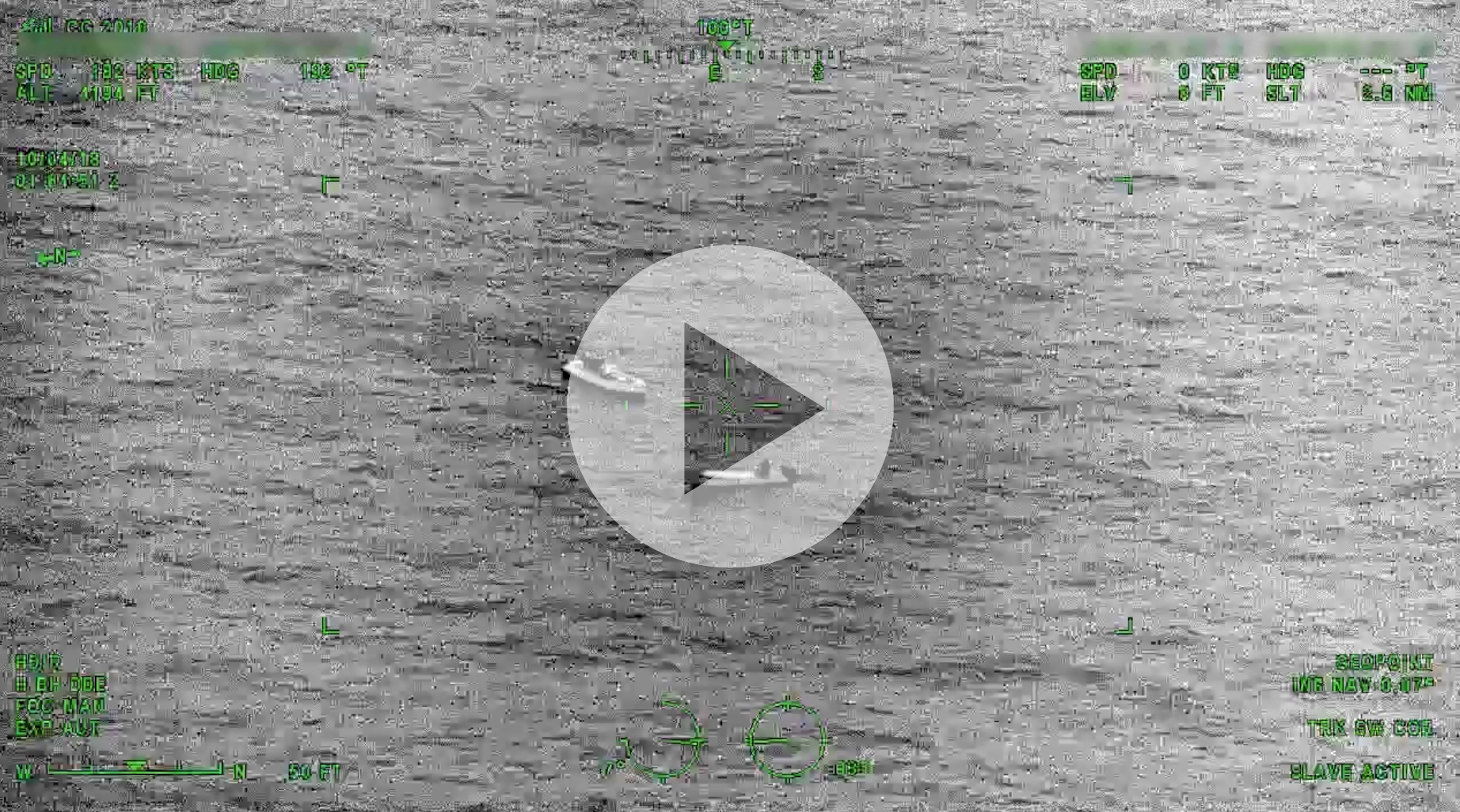 It was completely dark in the middle of the Caribbean Sea on the evening of October 3, 2018.

Dense bands of cloud shrouded the moon, obscuring all light. Storms intermittently rumbled to life, dampening the darkness with sheets of rain.

Five thousand feet above the sea, a large white airplane sliced through the gloom, its telltale orange stripe and Coast Guard shield obscured by the shadows.

Pilots and crew members inside the HC-130 Hercules airplane did not mind the obscurity; in fact, it was a critical part of their mission.

They had been sent into the black, windy night to search for a particular vessel, a Panga boat suspected of transporting cocaine northward. Beyond their “search box,” a targeted area in international waters off Costa Rica, the aircrew was armed only with the HC-130’s sensory equipment, years of training and their own intuition.

Petty Officer 1st Class Matt Lotz, a seasoned mission system operator aboard the Hercules, utilized all three to locate the target. Wrestling with various filters and scan methods, he used the plane’s installed camera to spot and track the Panga boat down below, despite the pitch-black night.

Little did the crews know, the end game would be rife with difficulty that night.

“The small boat crew experienced some technical difficulties,” said Lt. Patrick Spencer, aircraft commander of the HC-130. “Matt thought outside the box. He figured out a way to talk directly to the small boat so he could direct them to the target.”

Acting as the boat crew’s aerial navigator, Lotz guided them within 50 feet of the Panga.

The pursuit was short, but lively, with the Panga crew leading the Coast Guard team in wild arcs through the darkness.

With the Hercules aircrew serving as their eyes in the sky, Cutter Donald Horsley’s crew seized 600 kilograms of cocaine that night, a haul valued at approximately $17 million.

“When we get to see the end game, the actual drug bust, it gives the crew a sense of accomplishment,” said Lt. j.g. Zachary Georgia, an HC-130 pilot at Air Station Elizabeth City who routinely participates in Joint Interagency Task Force South’s counter-narcotics missions.

The sense of pride and the exciting departure from routine are two reasons that the air station’s members voluntarily deploy to Central America each year, according to Georgia.

In 2018, HC-130 crews from Air Station Elizabeth City conducted more than 100 JIATF South aerial patrols, directly contributing to the arrests of 34 suspected drug smugglers and the interdiction of 27,000 kilograms of narcotics, worth over $745 million.

“Keeping these harmful drugs off the streets of America is significant,” said Capt. Joseph Deer, commanding officer of Air Station Elizabeth City. “Without these intercepts and the deterrent presence of law enforcement authorities, the flow of drugs into the U.S. would be exponentially higher.”

While working in Central America, the aircrews operate from several different locations, and their patrol coverage varies wildly during their deployments. When the crews receive task direction from JIATF South, they are directed to search an expansive area, to investigate a known target, or to insert themselves into the end game of an ongoing case.

“Flexibility is key,” said Petty Officer 1st Class Trevor Tufts, an aviation maintenance technician in charge of the HC-130’s mechanical functions while airborne. “We don’t actually know where we’re going until we get the pre-mission brief each day. I’ve had the location change 10 minutes before departure.”

While their predominant goal is to help stop the trafficking of illicit drugs, the deployed Coast Guard crews have to adapt to ever-changing circumstances on the fly.

“During my last JIATF mission, we were out looking for drug smugglers, but we found a boat that had capsized instead,” Georgia said. “So the search and rescue case took precedence.”

Coast Guard aircrews work with a diverse array of entities and agencies while deployed in support of JIATF South, including the U.S. Navy, U.S. Air Force, U.S. Customs and Border Protection, and law enforcement agencies of surrounding nations. But according to the Coast Guard crews, the HC-130 Hercules airplane is what truly distinguishes them from their many teammates.

“We can offer twice the range of some of the other planes working down there,” Spencer said. “We simply have the best plane for the mission.”

Mission system operators like Lotz arguably benefit from the airplane’s equipment the most; as the person simultaneously communicating with JIATF South and other entities, monitoring the radar for possible targets, recording footage of action down below, and directing the movements of surface assets, he said he appreciates the HC-130’s various trappings.

While only a fraction of Air Station Elizabeth City’s 300 members deploy to Central America during their tour, their commanding officer said the unit is fully committed to supporting the JIATF South mission for the foreseeable future, and that everything they accomplish is achieved through a group effort by all five commands on base.

“We will continue to build on the excellent program that those before us have put in place, ever improving our training and equipment for those that follow in our footsteps,” Deer said. “I am confident the 300 professionals at Air Station Elizabeth City are up to the challenge.”