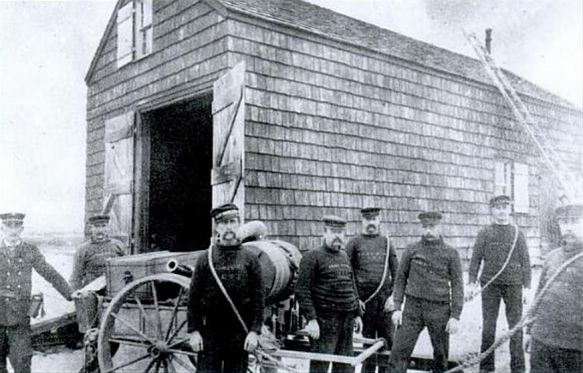 The original boathouse for the Toms River Life Saving Station in 1898. Image from Norman McClure of Toms River.

I am going to do something I seldom like to do, and point to a report without comment. I seem to have a lot of topic I have not been able to address lately so this is just a heads up to its existence. The GAO has created a report on the Coast Guard’s management of its shore infrastructure and as usual, they have suggestions. The report is 59 pages.

Below I duplicated the opening summary:

About 45 percent of the Coast Guard’s shore infrastructure is beyond its service life, and its current backlogs of maintenance and recapitalization projects, as of 2018, will cost at least $2.6 billion to address, according to Coast Guard information. The deferred maintenance backlog included more than 5,600 projects, with an estimated cost of $900 million. The recapitalization and new construction backlog had 125 projects, with an estimated cost of at least $1.77 billion as of 2018 (see figure). GAO’s analysis of Coast Guard data found that as of November 2018 there were hundreds of recapitalization projects without cost estimates—the majority of recapitalization projects. Coast Guard officials told GAO that these projects are in the preliminary stages of development.
The Coast Guard’s process for managing its shore infrastructure did not fully meet 6 of 9 leading practices that GAO previously identified. Of the nine leading practices, the Coast Guard met three, partially met three, and did not meet three. For example, the Coast Guard generally has not employed models for predicting the outcome of maintenance investments and optimizing among competing investments, as called for in leading practices. In one instance, the Coast Guard used a model to optimize maintenance for its aviation pavement and, according to Coast Guard officials, found that it could save nearly $14 million by accelerating investment in this area (e.g., paving runways) sooner rather than deferring such maintenance. Coast Guard officials told us that such modeling could be applied within and across all of its shore infrastructure asset types, but the Coast Guard did not implement the results of this model and does not require their use. Without requiring the use of such models, the Coast Guard could be missing opportunities to achieve cost savings and better manage its maintenance backlogs.