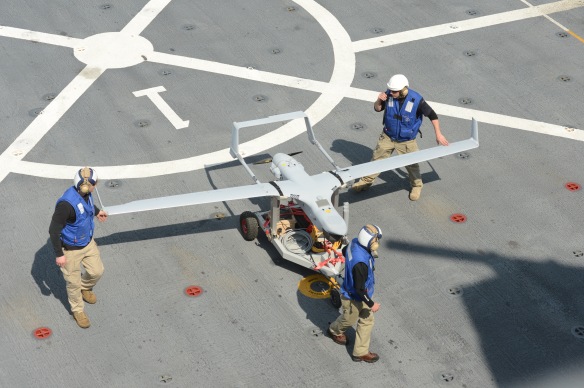 The Navy League’s Magazine Seapower reports that “a synthetic aperture/ground moving target Indicator Radar Payload and has been given the prototype designation AN/DPY-2()” for the MQ-21 Blackjack.

The RQ-21 Blackjack is, like the Scan Eagle, made by Boeing Insitu. It is heavier, 135 lb (61 kg) vs 48.5 lb (22 kg) max takeoff weight, with a correspondingly larger payload weight, but like the Scan Eagle it launches from the same launch and recovery systems.

The radar may be a bit large for Scan Eagle, but apparently not for the Blackjack.

The NSP-5 delivers high-performance capabilities despite its small size, weight and power characteristics. Commercially, the NSP-5 is available in a standard pod configuration that measures 5.4 inches (13.7 centimeters) in diameter and 45.3 inches (115 centimeters) in length, weighs 16 pounds (7.3 kilograms) and consumes 150 watts of power.