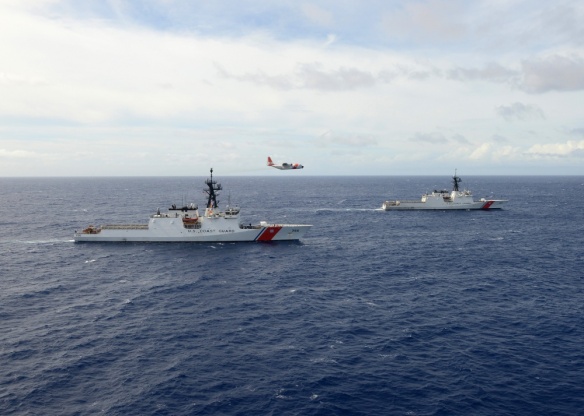 War on the Rocks has a post suggesting that the Coast Guard, with Navy support, should establish a patrol squadron to support United States Indo-Pacific Command (USINDOPACOM), even if it means closing down the existing PATFORSWA.

The Coast Guard’s role as lead agency in multiple Indo-Pacific maritime security institutions, particularly the Southeast Asia Maritime Law Enforcement Initiative, provides opportunities to demonstrate America’s role as a key component of the Indo-Pacific security architecture. A larger, operational Coast Guard role in the region would reinforce this message, and contribute to regional security and sovereignty, in sharp contrast to the Chinese Communist Party’s degradation of both. With appropriate funding and manning, an operational U.S. Coast Guard unit in the Indo-Pacific would add credibility to U.S. institutional commitments at a time when American security guarantees are being challenged across the region.

He suggests that this new command needs to be larger than PATFORSWA.

The Coast Guard recently committed to basing three of these cutters in Guam within two to three years, indicating that U.S. Coast Guard leadership is already looking for ways to maintain forces forward in the near term. However, when considering the size and scope of the Indo-Pacific theater, and the fact that current requirements in the Arabian Gulf call for six boats, three cutters is only a good first step, not a complete solution. A robust force consisting of a mix of six fast response cutters, the Coast Guard’s new Heritage-class offshore patrol cutters, and perhaps a rotationally deployed national security cutter would be appropriately sized and ideally positioned to assume responsibility for security cooperation with Indo-Pacific coast guards and navies seeking increased “white hull” interaction with the United States.

He also sees a role for a Coast Guard Intelligence detachment.

In addition to supporting the proposed Patrol Forces Indo-Pacific, a Coast Guard intelligence unit could fulfill the 2020 National Defense Authorization Act requirement for a U.S. intelligence fusion center in the Indo-Pacific without creating an unnecessary parallel structure alongside those already in existence.

3 thoughts on ““Reorienting the Coast Guard: A Case for Patrol Forces Indo-Pacific” –War on the Rocks”