This December 2001 “battle,” described as a six hour firefight, between a small North Korea (NK) vessel and four Japanese Coast Guard cutters was unusual, but it is interesting for what it can tell us about the difficulties of dealing with a vessel that refuses to stop, as would probably be the case with a terrorist attack.

The incident happened outside Japanese territorial waters but inside their EEZ.

The NK vessel appeared to be a trawler, but this was no trawler. It was reportedly capable of 33 knots.

The Japanese went through the usual procedures trying to get the vessel to stop, flags, loud hailer, warning shots. When these were ignored, at least initially the Japanese apparently chose an aim point forward in the vessel where it was unlikely to hit crew members. Over 1000 shots were fired.

As appears to be standard procedure with the Japanese Coast Guard, it was not a single cutter, but a team of cutters that responded. In this case four. Japan Coast Guard aircraft were on scene, but apparently they had no airborne use of force capability.

Generally in the video, it appears that the cutters remained abaft the beam of the target vessel, minimizing the pursued vessels opportunity to ram a cutter and also insuring that friendly vessels were not in the line of fire.

The Japanese cutters seen in the video appear to be Tsurugi class “high speed special patrol ships” specifically designed to intercept high speed North Korean vessels engaged in espionage or smuggling. They are longer but lighter than the Webber class, 50 meters (164 feet) in length with a 220 ton full load displacement and three diesels totaling

15,000 HP through three water jets. They are reportedly capable of 50 knots (other sources indicate 40 knots) and are armed with a JM61 20 mm Gatling gun, the Japanese version of the same gun that arms the Phalanx close in weapon system (CIWS). These might be thought of as similar to my proposal for a WPB replacement, Response boat, large–interceptor.

After the North Korean vessel was disabled the cutters came close aboard (about time 6:30). The wisdom of this was questionable since the vessel had been firing at the cutters. In fact the nearby cutter was fired upon. Subsequently apparently the crew of the NK vessel detonated scuttling charges, which had they been larger, might have damaged a nearby cutter.

15 survivors were seen after the sinking, but the cutters were told to ignore them as there was fear they would respond to rescue attempts with suicidal violence. The Japan CG cutter crews were relatively small. All members of the N. Korean crew were lost. Only three bodies were recovered.

The North Korean vessel was small, 29.7 meters (97.4 feet) in length, but still the weapons used against it were found wanting. Due to the presence of heavy weapons like RPGs, recoilless rifles, and MANPADs on N. Korea spy vessels, the Japanese concluded that the 20mm Gatling gun was not adequate for their purposes and now expect to include vessels with 40mm guns in any similar future operation.

As I have noted before, I believe all Coast Guard vessels, WPB and larger, should be armed to forcibly stop any vessel regardless of size and have an effective range of at least 4,000 yards, so as to be outside the effective range of most potential improvised vessel weapon systems.

The North Korean vessel was subsequently raised to allow investigation of the incident. The vessel and some of its contents are on display at the Japan Coast Guard museum in Yokohama (see below). 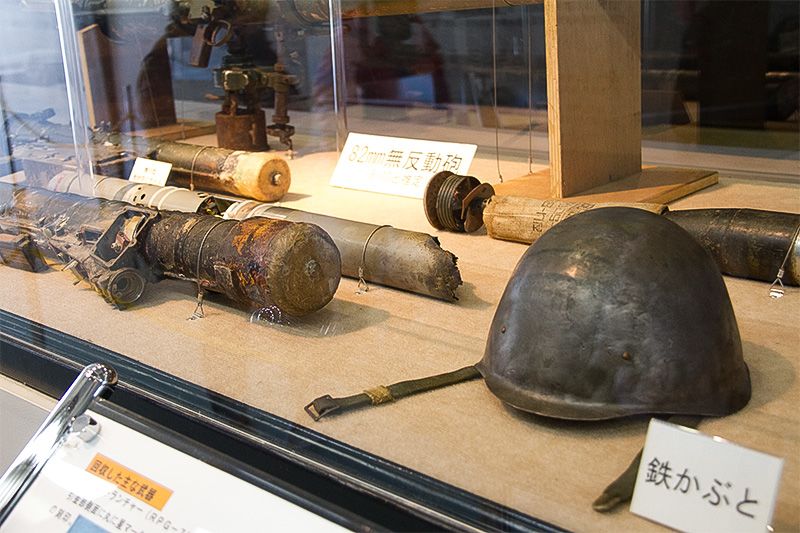 A steel helmet and parts of a Soviet B-10 recoilless rifle.

Weapons including RPGs and automatic weapons found when the North Korean vessel was raised. Author: Nomansland511 (a.k.a. nattou)

20 thoughts on “Battle of Amami-Ōshima”