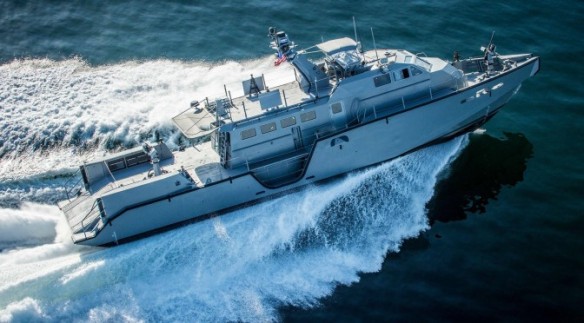 The April edition of U.S. Naval Institute Proceeding has a short article written by Coast Guard Lieutenants James Martin and Jasper Campbell discussing the recapitalization of the 87 foot WPB fleet and suggesting adaptation of the Navy’s MkVI patrol boat as a replacement.

Any choice of a new class of ships for the Coast Guard must depend on how it will integrate into the legacy fleet. Choices are strongly influenced by the strengths and weaknesses of the other assets available.

In FY2021 the Coast Guard expects to decommission eight of the 87 foot Marine Protector class without replacement. This change is justified as follows,

This initiative decommissions eight 87-foot Marine Protector Class CPBs. This initiative is based on the acquisition of the Fast Response Cutter (FRC) and Response Boat – Medium (RB-M), both of which are more capable than the legacy assets that they replace. Decommissioning these assets focuses patrol boat funding on operating and supporting new assets, such as the FRCs, as well as other strategic priorities. Forecasted material condition as assessed by the Coast Guard’s Patrol Boat Product Line will be a factor in identifying the specific cutter hulls to be decommissioned, ensuring that the cutters with the best material condition remain operational.

Overall fleet performance degradation will be minimized since FRCs outperform previous patrol boats and RB-Ms are more capable than previous boats. Finally, the decommissionings will focus on areas where the combination of FRCs and RB-Ms provides sufficient capability to remove the operational need for an 87-foot CPB

What they really seem to be saying is that RB-M, unlike the boats they replaced, are able to do some of the missions the WPBs were intended to do. On the other hand the 110 foot Island class WPBs were already more capable than the 87 footers so its not like the 87 footers were doing missions the 110s could not. The real difference here may be that, because we now have more larger patrol craft, both Webber and Island class than we did previously, we don’t need as many Marine Protector Class.

Nevertheless it does appear that the Coast Guard sees a need for some WPBs. The USNI article refers to a 2018 statement by the Commandant that, “Recurring Depot Availability Program (RDAP) is anticipated to extend the service life of the 87s well into 2030.”

The capability gaps between the Marine Protector class and the smaller boats below them in size, now RB-ms, has shrunk, while the gap between them and the larger Patrol craft, soon to be all FRCs, has grown. This suggests that any replacement should be, if anything, more capable than the Marine Protector class, not less. While faster and more heavily armed, than the 87 foot WPBs, it appears that the MkVI is less capable in terms of characteristics the Coast Guard values. They have less endurance, appear less seaworthy, and as currently configured, the only boats they can launch are flat bottomed rubber raiding craft.

It appears, any WPB replacement’s capabilities should move closer to those of the FRC rather than the RB-M. Still I see their role as much different from that of the Webber class. The Webbers would be used primarily on regularly scheduled patrols while the WPB replace would be the true “Fast Response Cutters,” on standby for developing emergencies.

I offered a description of my concept of a WPB replacement earlier, including concepts of operation and manning, explaining why it should be larger, faster, and better armed. There was additional discussion about the concept here. My suggestion was that it should be one and a half to twice as large as the 87 foot WPBs and about half the size of the 353 ton Webber class…136 to 182 tons full load, or roughly 100′ (30.5 meter) to 130′ (39.6 meter) in length, not too much different from the Island class cutter, 110 feet (33.5 meter) loa and 168 tons.

I also saw it being uniquely equipped to fill a current gap in our Port, Waterways, and Coastal Security mission, that of being able to defend our critical ports, by being able to forcibly stop any vessel, regardless of its size, speed, or maneuverability.

Such a ship would also be both of interest for Foreign Military Sales and as a reserve element for potential combat roles.

10 thoughts on ““Considerations for a Future Patrol Boat” –USNI”