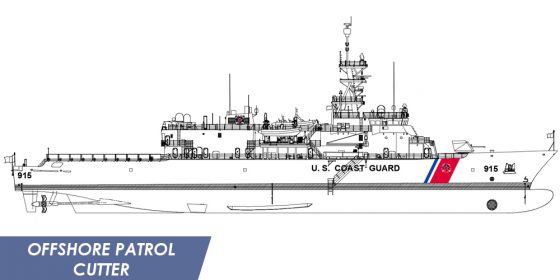 The Congressional Research Service (CRS) has again updated their “Coast Guard Cutter Procurement: Background and Issues for Congress.” The last updated edition of this analysis, that I reported on here, was dated 28 Jan. 2020. The FY2021 PC&I request includes funding for OPC#3 and long lead time material for #4, plus small amounts for the NSC and FRC program. Not addressed here is the second Polar Security Cutter for which funding is also requested, addressed in a separate CRS report. There is a good breakdown of the entire request for vessels here.

As noted earlier, eight Marine Protector class, 87 foot WPBs are to be decommissioned without replacement.

Congress has routinely added Webber class Fast Response Cutters to previous budgets. I have to believe the Congress will fund four additional FRCs, if not in FY2021 then in 2022, so that we can ccomplete the program of record and replace all six Island class WPBs of PATFORSWA. A 12th NSC seems much less likely, but not impossible. The summary for the 15 April edition is quoted below.

OPCs are to be less expensive and in some respects less capable than NSCs; they are intended to replace the Coast Guard’s 29 aged medium-endurance cutters. Coast Guard officials describe the OPC and PSC programs as the service’s highest acquisition priorities. OPCs have an estimated average procurement cost of about $411 million per ship. The first OPC was funded in FY2018. The Coast Guard’s proposed FY2021 budget requests $546 million in procurement funding for the third OPC, LLTM for the fourth, and other program costs. On October 11, 2019, the Department of Homeland Security (DHS), of which the Coast Guard is a part, announced that DHS had granted extraordinary contractual relief to Eastern Shipbuilding Group (ESG) of Panama City, FL, the builder of the first four OPCs, under P.L. 85-804 as amended (50 U.S.C. 1431-1435), a law that authorizes certain federal agencies to provide certain types of extraordinary relief to contractors who are encountering difficulties in the performance of federal contracts or subcontracts relating to national defense. ESG reportedly submitted a request for extraordinary relief on June 30, 2019, after ESG’s shipbuilding facilities were damaged by Hurricane Michael, which passed through the Florida panhandle on October 10, 2018. The Coast Guard intends to hold a competition for a contract to build OPCs 5 through 15.

FRCs are considerably smaller and less expensive than OPCs; they are intended to replace the Coast Guard’s 49 aging Island-class patrol boats. FRCs have an estimated average procurement cost of about $65 million per boat. A total of 60 have been funded through FY2020, including four in FY2020. Four of the 60 are to be used by the Coast Guard in the Persian Gulf and are not counted against the Coast Guard’s 58-ship POR for the program, which relates to domestic operations. Excluding these four FRCs, 56 FRCs for domestic operations have been funded through FY2020. The 36th FRC was commissioned into service on January 10, 2020. The Coast Guard’s proposed FY2021 budget requests $20 million in procurement funding for the FRC program; this request does not include funding for any additional FRCs.