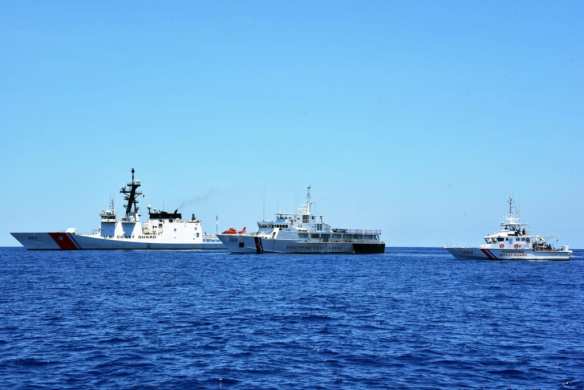 The Hill argues for increased Coast Guard presence in the Pacific including greater interaction with the nations of the Western Pacific.

After explaining why China is a greater threat than Germany, Japan, or the Soviet Union ever were, the author, Seth Cropsey, explains:

“The U.S. Coast Guard (USCG) is uniquely situated to act as a bridge between U.S. combat forces and their allied counterparts precisely because of its dual political-legal role. Its engagement in answering grey zone challenges is also a helpful encouragement to the maritime services’ cooperation that allows each service to perfect its unique skills.”

He argues for the 12th NSC.

“As it stands, the Coast Guard’s long-range cutters have been cut from ten in the Pacific to only six (actually we still have six NSCs and two WHECs–Chuck). If Congress does not fund the 12th National Security Cutter, it will undermine the Coast Guard’s mission in the Western Pacific and weaken U.S. security.”

Most importantly, as we have done several times here, he calls for a reevaluation of the services needs and recurrent long term planning.

Even more broadly, U.S. policymakers – within the Coast Guard, the Armed Forces, and the Pentagon – must consider the Coast Guard’s strategic role. The USCG has not produced a fleet plan, termed the “Fleet Mix Analysis,” since 2004. Even in 2008 and 2012, when it revisited the document, it concluded that its fleet could only meet three-fifths of its missions. In 2004, Chinese fighter aircraft seldom conducted night operations, North Korea had not yet tested a nuclear weapon, and the U.S. had toppled Iraq’s Saddam Hussein just a year before; Hamas was a small but noted Palestinian terrorist organization, while al-Qaeda in Iraq was still consolidating power.

After 16 years, any service’s missions and equipment must change as it adapts to new threats; the same is true for the Coast Guard. A robust force review is in order, potentially modeled off the Navy’s 30-year plan which will generate a new fleet capable of meeting the demands of great-power competition, especially in the Asia-Pacific.

4 thoughts on ““Cutting Coast Guard funds threatens our security, at home and in the Pacific” –The Hill”