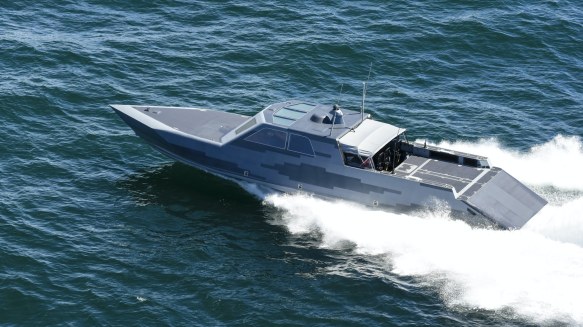 The Navy League Magazine, Seapower, reports on new craft being used by the Special Warfare community. Always interesting to see what other people are doing, “messing about in boats.”

There were a couple of paragraphs that I thought might have application to the Coast Guard (note, CC=Combatant Craft),

“As pleased as the operators are with the CCM, SOCOM is focused on bringing a lot of things to CCM,” Russell said. “One of those is maritime precision engagement. We’re going to see a topside configuration change with the integration of CC FLIR II.”

Maritime precision engagement is envisioned to be “a standoff, loitering, man-in-the-loop weapon for combatant craft capable of targeting individuals, groups, vehicles [and] small oceangoing craft with low collateral damage,” he said, noting that the installation would involve craft alterations, launchers, and missiles.

The CC FLIR II, built by FLIR Systems, is a “big upgrade from our legacy maritime FLIR,” Russell said. It is used to detect, recognize, identify, range, track and highlight objects of interest.

5 thoughts on “Something Special: U.S. SOCOM Continues to Modernize Its Fleet of Smaller Surface Craft”