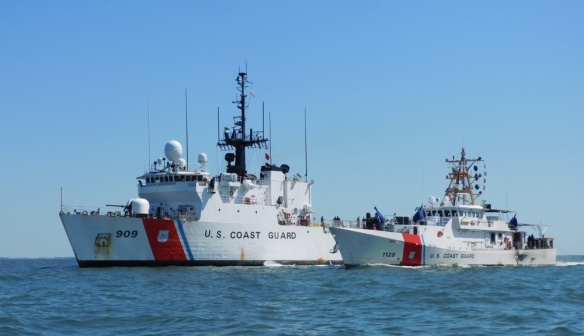 Forbes evaluates the Coast Guard’s performance and the dangers inherent in its aging fleet.

“With all the new interest, America’s Coast Guard is transitioning from an overlooked national security afterthought into a more significant geopolitical player, befitting what is, after all, the world’s 12th largest naval force.”

“It all looks pretty good so far. America’s Coast Guard can be proud of its current operational record and new strategic potential. But as the geopolitical importance of Coast Guard missions ramp up, so too will the ramifications of mission failure. The Coast Guard has a lot of fragile ships that can break at any time. The stress may already be showing…”

There is a lot of criticism of the 270 foot WMECs here. I have never been a great fan. When they were being built, the Chief Engineer made keeping the cost down a number one priority. He saw cost closely related to length. Contrary to stories that they were supposed to have been longer, in fact the original design was three feet shorter. I heard at the time, that Naval engineers went “down on bended knees” to get an additional three feet of shear on the bow.

USCGC Citrus, 1984, after conversion from buoy tender to WMEC. US Coast Guard photo.

When the 270 program began, the Coast Guard still had 18 World War II vintage WHECs and WMECs

Until the first National Security Cutter, Bertholf, was commissioned Aug. 4, 2008, the only addition to the fleet, after the completion of the 270s, was 283′ Alex Haley, transferred from the Navy in 1999.

While I always felt we would have been better off evolving an improved 327, the 270 was a net improvement. Unlike the ships they replaced, they had a helicopter deck and hangar. Even the 378s did not have a hangar at that point. The 270s introduced the digital Mk92 fire control, 76mm Mk75 gun, SLQ-32 ESM, and Mk36 SRBOC. They were a half knot slower than the 327s, but were substantially faster than the other ships they replaced, none of which were capable of more than 16 knots.

It was perhaps a lost opportunity to build something better, for only a little more money, but they were an improvement. We should have built at least six more to replace the WWII built ships, and maybe another 16 to replace the 210s beginning in 1994 (perhaps a block 2 with a bit more bow). We should have awarded contracts to start replacing the 270s more than a decade ago.

Now that we do have bipartisan support in Congress, we need to translate that into consistently larger Procurement, Construction, and Improvement funding and an accelerated build rate for the OPCs. After all, we currently have only one WMEC less than 30 years old, that just barely. We really should not wait 17 or 18 years to replace them all.