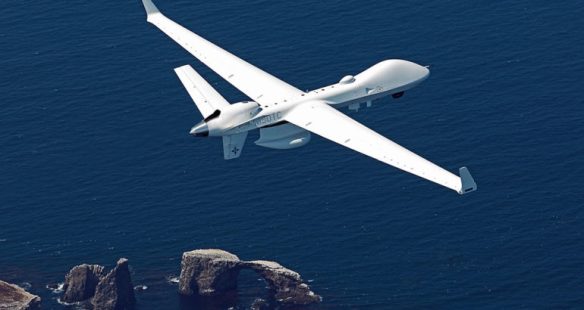 The Navy League’s on line magazine, Seapower reports that,

“General Atomics Aeronautical Systems Inc. (GA‑ASI) plans to take a company-owned SkyGuardian remotely piloted aircraft to the United Kingdom later this year to undertake a series of operational capability demonstrations for NATO allies, including The Netherlands, the company said in a Feb. 3 release. The U.K.’s Protector program is a derivative of SkyGuardian with a range of U.K. modifications and the Royal Air Force (RAF) is supporting this visit.”

This system is quickly becoming the go-to solution for Maritime Domain Awareness. It is an obvious solution for the Coast Guard’s MDA requirement. The requirement for land based long endurance UAS goes back at least to the Deepwater Program begun in the 1990s. It looks like a Coast Guard version of the Global Hawk may have been identified as a likely solution as early as 2002. Congress has been pushing the Coast Guard to start using land based UAVs.

There might be a question if this would duplicate the Navy’s Broad Area Maritime Surveillance (BAMS) program and its MQ-4C, but it is almost certain the Navy system will never provide all the information the Coast Guard needs. Their priorities are different, for instance, there are no plans for the Navy to base MQ-4Cs in Alaska.

In 2018 the CG-9 reported  “The Coast Guard on March 26 released a draft solicitation for long range/ultra-long endurance (LR/U-LE) unmanned aircraft system (UAS) technology demonstration and flight services requirements. Industry is invited to submit questions, comments and feedback on draft items including the statement of work, proposal requirements and evaluation methodology.” I don’t know what came of that, but there have been several demonstrations since.

It is time to include land based UAS in the Coast Guard budget request. We can start small and grow the capability, but it is time to start. The answer might not be the MQ-9B, but answers are out there.

Somehow I managed to publish this prematurely so this is an updated version.