Regular readers know I have long been concerned that our cutters may not be adequately armed, if they are placed in a situation where they need to forcibly stop almost anything larger than a large cabin cruiser. It is not just that larger vessels are hard to sink. They may shoot back.

While I regard this as possible, but unlikely to occur in US waters (sort of like 9/11 was unlikely), it’s even more of concern, for countries with ongoing insurgencies, like the Philippines. Still, I don’t want to see the Coast Guard tested and found unprepared.

It becomes more likely to affect USCG personnel if they are overseas, doing counter piracy, doing counterinsurgency as we did in Vietnam, looking for weapons smugglers, or if we just stumble across terrorists enroute to their target and mistake them for drug smugglers. It also might be the work of an overconfident, vengeful drug lord.

In all probability, the situation will begin with an attempt to board a vessel of interest. It is probably most dangerous if they feign compliance, and the cutter comes close alongside. If the cutter sends a boarding party, it may be ambushed while they also attempt to disable the cutter. They would almost certainly make an effort to kill any exposed gunners.

That we might encounter small arms is a given, but I will look at other weapons, that might give them an edge, particularly if the cutter is surprised.

An aviation overwatch–fixed wing, helicopter, or UAV–could help us detect the presence of weapons, but it is not too hard to conceal weapons behind crates, in containers, or under canvas.

I will be using primarily Wikipedia and NavWeaps for reference. First, I will talk about the weapon type in general and then offer examples. Most of the examples are of Russian/Soviet or Chinese origin. They were chosen because these types seem very widely distributed and frequently fall into the hands of non-state actors.

Many of these weapons go back many decades, but that does not make them any less effective. Remember, we are still using the .50 caliber, a design that goes back to WWI.

As you go through the examples, I think you will see why I have advocated for weapons that can engage effectively from at least 4,000 yards.

A rocket-propelled grenade (often abbreviated RPG) is a shoulder-fired missile weapon that launches rockets equipped with an explosive warhead. Most RPGs can be carried by an individual soldier and are frequently used as anti-tank weapons. These warheads are affixed to a rocket motor which propels the RPG towards the target, and they are stabilized in flight with fins. Some types of RPG are reloadable with new rocket-propelled grenades, while others are single-use.”

These were initially designed as anti-tank weapons but there are warheads optimized for other targets as well. Reportedly fifteen different countries have made dozens of different weapons of this type.

An RPG missile found in Lebanon with a manufacturing symbol of the Iranian Army displayed by the IDF intelligence branch. Photo: Israeli Defense Force

The ruggedness, simplicity, low cost, and effectiveness of the RPG-7 has made it the most widely used anti-armor weapon in the world. Currently around 40 countries use the weapon; it is manufactured in several variants by nine countries. It is popular with irregular and guerrilla forces. The RPG has been used in almost all conflicts across all continents since the mid-1960s from the Vietnam War to the ongoing Syrian Civil War.

Reportedly 9,000,000 of these have been produced. After the AK-47, it may be the most ubiquitous weapon in the world. A version is even made in the US. Different projectiles are available with different warheads. Projectile weight varies from 2 kg (4.4 pounds) for the fragmentation round to 4.5 kg (9.9 pounds) for those with a thermobaric warhead. Effective range is 300 meters or about 330 yards. Accuracy is affected significantly by crosswind.

The weapon has been used by ISIS and Al Qaeda.

A recoilless rifle, recoilless launcher or recoilless gun, sometimes abbreviated “RR” or “RCL” (for ReCoilLess) is a type of lightweight artillery system or man-portable launcher that is designed to eject some form of countermass such as propellant gas from the rear of the weapon at the moment of firing, creating forward thrust that counteracts most of the weapon’s recoil. This allows for the elimination of much of the heavy and bulky recoil-counteracting equipment of a conventional cannon as well as a thinner-walled barrel, and thus the launch of a relatively large projectile from a platform that would not be capable of handling the weight or recoil of a conventional gun of the same size. Technically, only devices that use spin-stabilized projectiles fired from a rifled barrel are recoilless rifles, while smoothbore variants (which can be fin-stabilized or unstabilized) are recoilless guns. This distinction is often lost, and both are often called recoilless rifles.

These weapons have generally been replaced by ATGMs except in the case of the Carl Gustaf, which is now being assigned, one to every US Marine infantry squad, and one to every US Army infantry platoon. Still, there are many of these weapons in circulation and they are commonly used mounted on the technicals of various non-state actors.

Forces belonging to the Iranian Navy using SPG-9. Velayat 94 Military exercise that held in February 2016 in the range of Strait of Hormuz and northern Indian Ocean. Tasmin News Agency.

“The SPG-9 Kopyo (Spear) is a tripod-mounted man-portable, 73 millimetre calibre recoilless gun developed by the Soviet Union. It fires fin-stabilised, rocket-assisted HE and HEAT projectiles similar to those fired by the 73 mm 2A28 Grom low pressure gun of the BMP-1 armored vehicle. It was accepted into service in 1962, replacing the B-10 recoilless rifle.”

The modified pick-up truck, or “technical,” is a trademark of modern, unconventional warfare. Both rebels and government forces have used them extensively during the conflict. This one is carrying an anti-aircraft gun, ammunition, and petrol stored in plastic barrels. Photo Ajdabiya technical – Flickr – Al Jazeera English.jpg
Created: 23 April 2011

Reportedly, in 2007 ammunition for the weapon was still being produced in Bulgaria, Egypt, People’s Republic of China, Poland, Romania and Russia.

“In the Soviet Union, some 140,000 units were produced. The ZU-23 has also been produced under licence by Bulgaria, Poland, Egypt and the People’s Republic of China.”

Soviet S-60 57 mm AA gun at Muzeyon Heyl ha-Avir, Hatzerim airbase, Israel. 2006. This gun was sold to 37 different countries during the Soviet era and has been used by “Islamic State of Iraq and the Levant.” Photo credit Bukvoed via Wikipedia.

The 57mm S-60 goes back to the World War II. The gun was manufactured in the USSR, China, Poland, and Hungary. Reportedly it is still used by 35 nations and was previously operated by many more.
The projectile weighs 6.17 lbs. Rate of fire is 120 rounds per minute cyclic, but 70 rpm sustained.
The Islamic State allegedly shot down a Cessna 208 Caravan operated by the Iraqi Air Force near Hawija, Iraq on 16 March 2016 with a truck-mounted S-60.
Anti-Tank Guided Missiles:
There are a huge number of Anti-Tank Guided Missiles (ATGM) available, any of which could ruin your entire day. “As of 2016, ATGMs were used by over 130 countries and many non-state actors around the world.” I’ll just talk about a couple. 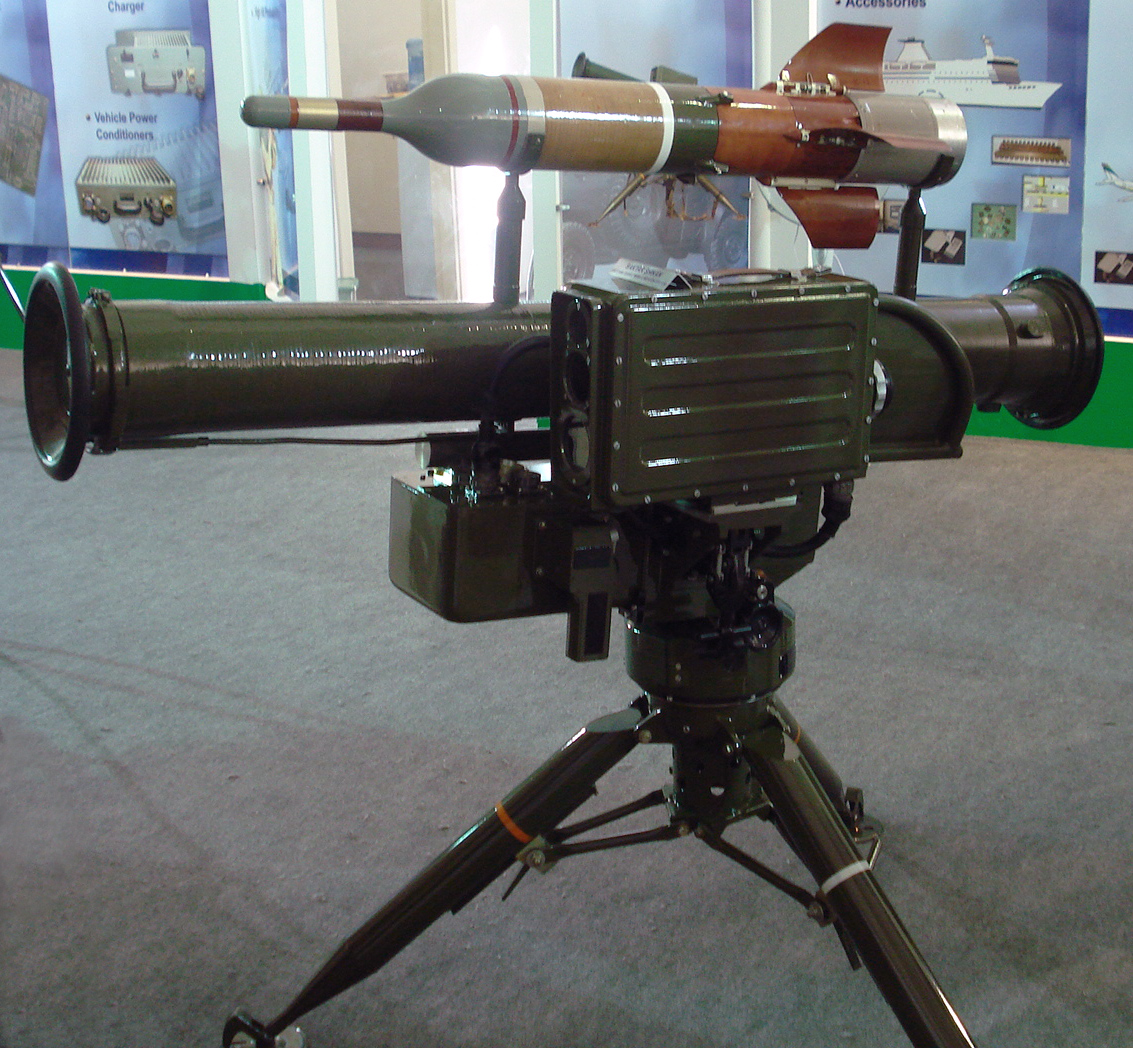 IDEF ’07, Baktar Shikan, original Wikipedia upload by KIZILSUNGUR at Turkish Wikipedia,1 June 2007.
The HJ-8 or Hongjian-8 (Chinese Red Arrow-8) and Bhaktar Shikan (Pakistani version) was developed in China. This tube-launched, optically tracked and wire-guided missile weighs 24.5 kg, has a range of up to 4,000 meters (one version reportedly 6,000 meters). It entered mass production in 1984 and has been operated by 21 countries and by non-state actors including ISIS. There is even a variant (HJ-8S) with an anti-ship warhead. Versions are also made in Pakistan and Sudan. Reportedly, in 2009, the Sri Lankan Army used these weapons against fast attack craft of the Tamil separatist LTTE’s Sea Tigers naval wing.