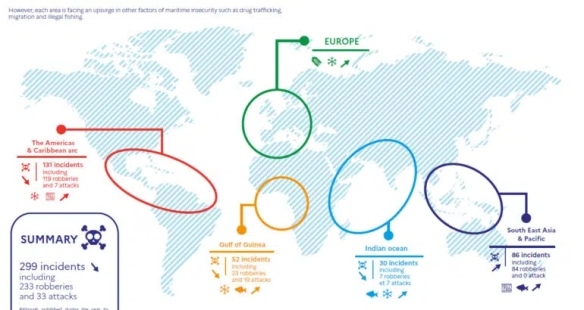 In reading this, note the difference between piracy and maritime robbery is that, the first occurs on the high seas, while maritime robbery takes place within a nation’s territorial sea or internal waters.

For me, there were two surprises in the Naval News report. First there was the surprisingly good news, that incidents were much reduced in the Gulf of Guinea, but then there seemed to be the bad news, that the Caribbean was one of the two worst areas for piracy and maritime robbery.

But looking at the complete original report, Sec. 3.4, it finds that the “Caribbean Sea is an area where the threat of piracy or robbery is considered low.” I presume this apparent conflict between a high number of incidents and low probability, is due to the high traffic in the Caribbean.

Most of the “piracy/maritime robbery” reported in the Caribbean was non-violent theft from anchored yachts. This is very different from the Gulf of Guinea, where kidnappings and attacks on ships are still relatively common.