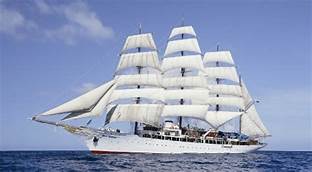 The former USS White Cloud. During the war its sails, most of its masts, and bow sprit were removed.

Below is a News Release regarding the opening a new support facility for Webber class WPCs in Guam. As has become common, a group of three of the class are homeported together, facilitating support functions.

The crew of Guam based USCG Cutter Oliver Henry participated in an integrated exercise alongside Navy Maritime Expeditionary Security Squadron TWO in the Philippine Sea under the direction of U.S. 7th Fleet.

The ship referenced in the news release, USS White Cloud, a Coast Guard manned yatch converted to a patrol gunboat, was unique in WWII, in that it was the first truly racially integrated ship in the US Navy and it was then Carlton Skinner, USCGR’s idea, not as a social experiment, but simply as the best use of available manpower.

Gov. Skinner also served in the Coast Guard and was the commanding officer of the Coast Guard Cutter Sea Cloud when it integrated into the Navy during World War II for combat services.

The Sentinel-class FRC is the Coast Guard’s next generation of patrol boat and replaced aging Island-class vessels which had been in service since 1985. The FRC boasts advanced command, control, communications, computer, intelligence, surveillance, and reconnaissance systems while providing a larger, more stable, and safer platform from which to conduct operations. The Skinner Building will house personnel and equipment to manage maintenance and maximize FRC operational readiness.

Please contact Lt. j.g. Edward Oingerang via email (Edward.M.Oingerang@uscg.mil) by 4 p.m. on July 6, 2022 as guest passes need to be requested for access to the base.