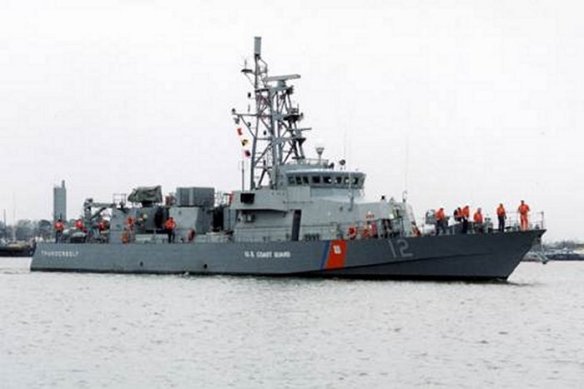 USS Thunderbolt, seen here in both Coast Guard and Navy markings during its period of service in the USCG. U.S. Coast Guard photo by David Schuffholz

The US Navy’s 5th Fleet today announced it thwarted an attempt by an Iranian ship to seize an American unmanned surface vessel operating in the Arabian Gulf.

(See the video below.)

The unit that stopped this Iranian vessel from making off with the Saildrone was USS Thunderbolt (PC-12), supported by a helicopter of Helicopter Sea Combat Squadron 26, presumably an MH-60S. Vessels of this class are in the process of being decommissioned from the US Navy. Most of their functions will be performed USCG Webber class WPCs of Patrol Forces SW Asia.

This incident does seem to highlight a, not unexpected, aspect of Unmanned Surface Vessel (USV) deployment. Rogue nations and even non-state actors may try to steal them. As we see here, there may be little or no consequences if they are caught in the act, so there is little to deter a repeated attempt.

Next time it happens, it is likely that a Coast Guard cutter will be sent to retrieve it.

Wikipedia provides this information on the Saildrone Explorer.

“The Saildrone Explorer is a 23-foot-long (7.0 m) USV that can sail at an average speed of 3 knots (5.6 km/h; 3.5 mph) (depending on the wind) and stay at sea for up to 365 days. The Explorer is designed for fisheries missions, metocean data collection, ecosystem monitoring, and satellite calibration and validation missions.”

Bigger, more expensive and more capable Saildrones are on the way.

The US Coast Guard has been experimenting with Seadrones of this class, and has supported 5th Fleets experiments with them.

Thanks to Walter for bringing this to my attention.