Below is a news release from Atlantic Area. This is more evidence of the Coast Guard’s interest in helping the nations of West Aftrica, particularly those around the Gulf of Guinea. The unit used for the mission is a bit unusual. USS Hershel “Woody” Williams (ESB 4) is a Lewis B. Puller-class expeditionary sea base.

These ships are unusual in that they have small hybrid civilian/regular Navy crews. They are commissioned Navy ships, not MSC. They might be thought of as large mobile warehouses. They have a lot of space and equipment for moving things around. They are doing a lot of work with unmanned systems and mine countermeasures. They are also expected to be useful in disaster response. They have a large flight deck and hangar. You could probably base four Coast Guard MH-60s on one of them. In wartime, they might provide air cover for convoys, much like the escort carriers of WWII (not that the Navy has floated this idea). How they ultimately get used, is still open to imaginative thinking.

The observed pattern suggests, one ESB will be assigned to each of the six active numbered Fleet Commands with specific geographic responsibilties, with the probable exception of 2nd Fleet (Western North Atlantic Ocean). Currently five Expeditionary Sea Bases (ESB) are planned. Three have been delivered and two are on the way.

USS Miguel Keith (ESB-5) is based in Saipan, very near the three Webber class FRCs and buoy tender based in Guam. She may be helpful in Coast Guard efforts in the Western Pacific.

The two yet to be delivered ESBs may also be working with the Coast Guard. An ESB assigned to 4th Fleet could assist the Coast Guard’s drug interdiction efforts in the Eastern Pacific and a 3rd Fleet ESB could help IUU and other law enforcement and capacity building efforts in the South Central Pacific. They might serve as mother ships for patrol craft or as bases for UAVs. 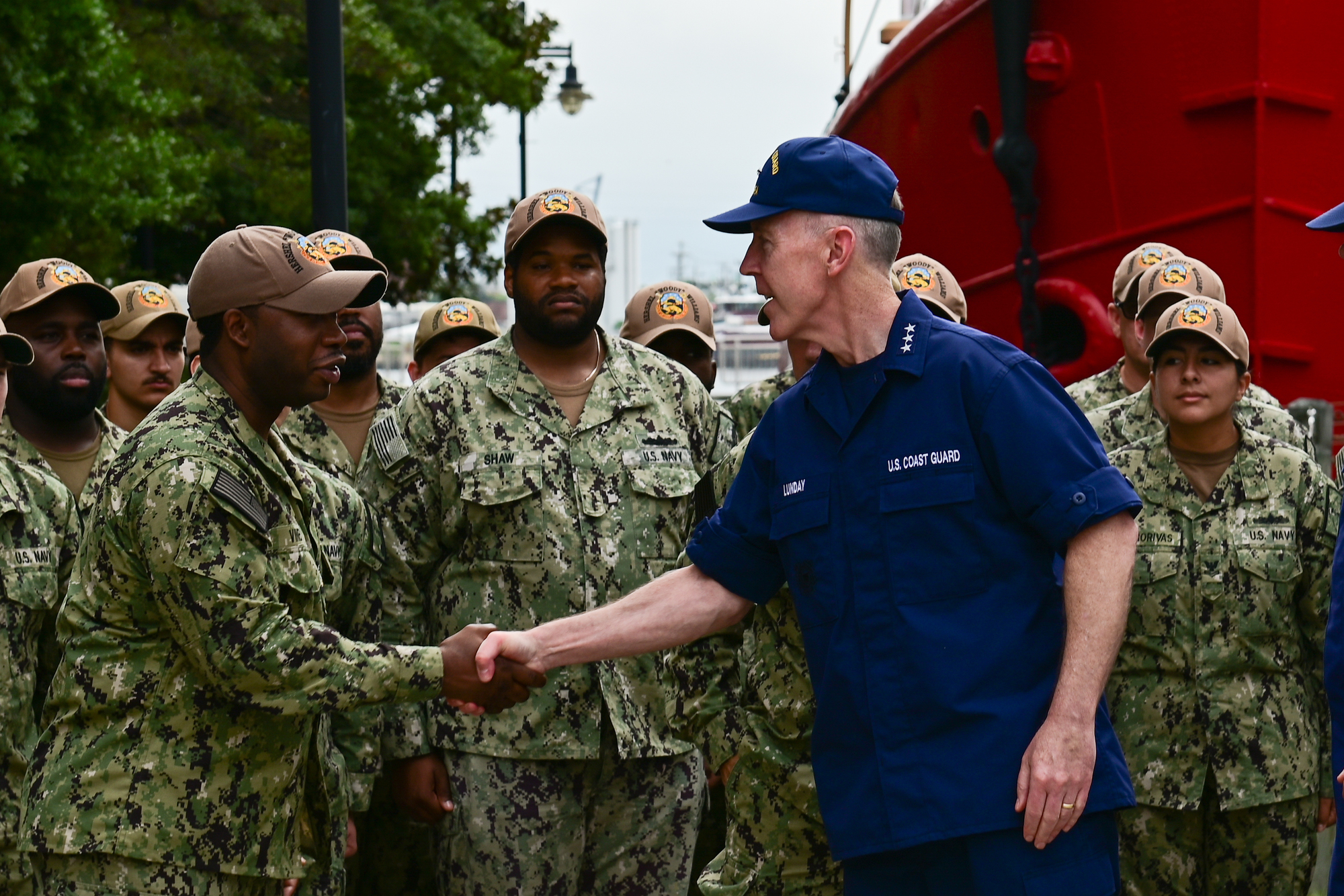 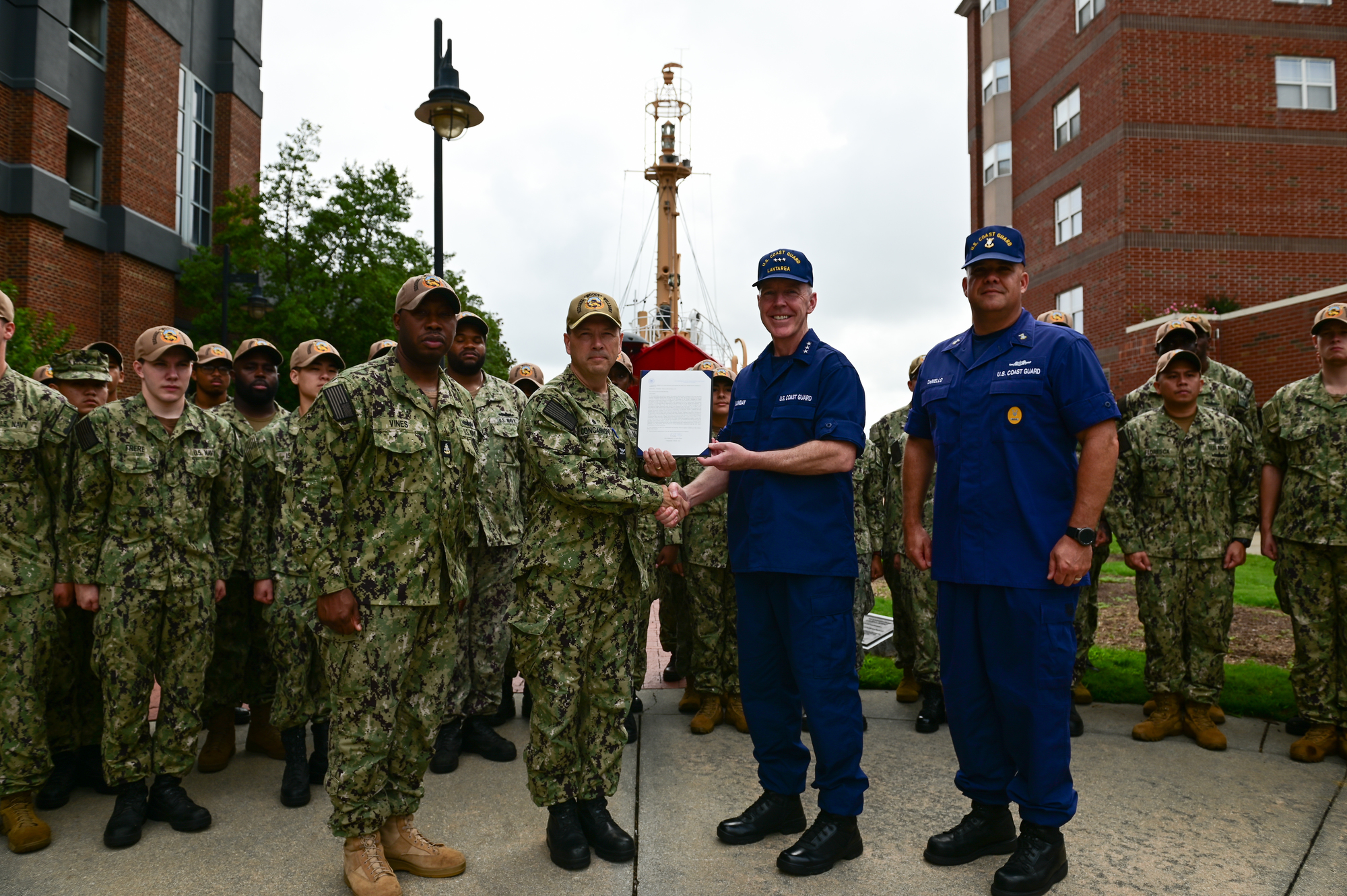 The Coast Guard Special Operations Service Ribbon is awarded to personnel of the U.S. Armed Forces who participated in Coast Guard operations of a special nature, not involving combat.

In April, Hershel “Woody” Williams completed a deployment in support of U.S. Naval Forces Africa, conducting a wide range of operations including counter-narcotics and combatting illegal, unreported, and unregulated fishing in the waters off of Africa’s Atlantic coast.

During the deployment, Hershel “Woody” Williams operated with an embarked Coast Guard law enforcement detachment as well as maritime forces from Cabo Verde and Sierra Leone. With the support of the embarked partner forces, U.S. personnel were able to assist with law enforcement operations within each partner’s respective territorial waters.

The joint and combined U.S.-African team conducted a counter-narcotics boarding of a fishing vessel, which resulted in the seizure of approximately 6,000 kilograms of suspected cocaine and transferred seven suspects to Cabo Verde officials.

Additionally, Hershel “Woody” Williams and the embarked Coast Guard law enforcement detachment supported the interdiction of a fishing vessel illegally operating within the exclusive economic zone of Sierra Leone. The vessel and its crew were escorted into port and transferred to Sierra Leonean authorities.

“I’m proud of the superior operations and mission outcomes by the crew of USS Hershel “Woody” Williams,” said Lunday. “This collaboration between the U.S. Coast Guard, U.S. Navy, and our African partners highlights the capabilities of America’s maritime services and our ability to aid partner nations as they seek to build their maritime security and economic prosperity.”

The U.S. shares a common interest with African partner nations in ensuring security, safety, and freedom of navigation on the waters surrounding the continent, because these waters are critical for Africa’s prosperity and access to global markets.

Deployment of Hershel “Woody” Williams by U.S. Naval Forces Africa to Africa’s Atlantic coast demonstrates a commitment to helping our African partners improve security. The ship is an expeditionary sea base, which is capable of conducting counter-piracy, maritime security, and humanitarian and disaster relief operations, as well as supporting a variety of rotary wing aircraft. Acting as a mobile sea base, Hershel “Woody” Williams is a part of the critical access infrastructure that supports the deployment of forces and supplies to support global missions.

For over 80 years, U.S. Naval Forces Europe-U.S. Naval Forces Africa has forged strategic relationships with allies and partners, leveraging a foundation of shared values to preserve security and stability.