Covert Shores reported on new Iranian missile armed catamaran corvettes, but the report also included the photo above. What we are seeing is a boat suspended from the stern of the corvette. The boat is equipped with what appears to be a torpedo tube for a lightweight torpedo. Presumably there is a second tube on the other side. Diameter is likely to be the same as the NATO standard, 324mm or 12.75″. Unlike most lightweight torpedoes, this is unlikely to be intended for use against submarines. Almost certainly, it is intended for use against surface ships.

There is not a lot of public source information about Iranian torpedoes but their partners in crime, Russia and China, are both believed to have cloned the US made Mk46 torpedo and both passive and active acoustic and wake homing technology is readily available. Passive acoustic homing in the search phase, and wake homing in the terminal phase, seems likely. Range is probably at least 8,000 yards.

This means, these torpedoes can be launched from well outside the effective range of typical Close In Weapon Systems (CIWS) of 20 to 40mm.

We can’t take much comfort in the fact that the warhead of these torpedoes would be about 100 pounds. That is way less than the approximately 600 pounds of a heavy weight 21″ torpedo like the Mk48, but the effects of an underwater explosion are not linear. The effect of a 100-pound warhead is about half that of heavy weight torpedoes that we have repeatedly seen break ships in half. So, a lightweight torpedo, exploding under the keel, might not break a ship in half, but it is going to hurt.

I have long felt an anti-surface light weight torpedo like this would provide Coast Guard cutters a relatively low-cost way to forcible stop a medium to large vessel, regardless of size, a capability they do not currently have. Apparently, the Iranians think it will work. 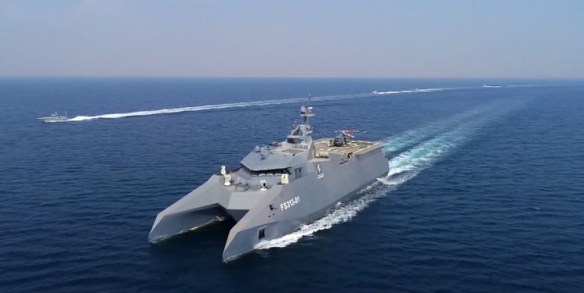 This is a significant departure for the Islamic Revolutionary Guard Corps. Apparently, they have recognized that their naval swarm forces are vulnerable to attack from the air, and, I believe, particularly helicopters. 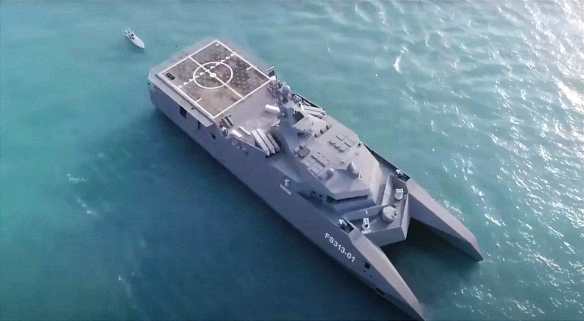 With its array of VLS AAW weapons, these corvettes constitute a serious threat to USN and allied helicopters that might be used to counter Iranian swarm tactics.

When engaged in force protection, if the force protection package includes aircraft, and one of this class shows up, a PATFORSWA Webber cutter class might be doing useful service, if they take station a couple hundred yards behind the corvette and maintain a fire control solution on that probably highly flammable and explosive collection of weapons in the center of the superstructure, behind the bridge–without pointing the gun, of course.