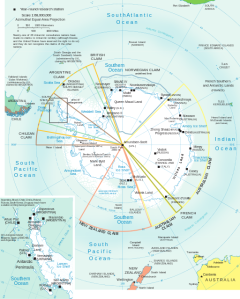 DefenseNews reports on the growing South American interest in Antarctica and the proliferation of polar ships that support these interests. The increased interest is fueled by anticipation that changes in the Antarctic Treaty system will allow resource exploitation.

If the current treaty is altered or abrogated, a number of nations have already made claims to Antarctic territory, held in abeyance by the current treaty. Some of these claims overlap. Interestingly neither the US or Russia has made any specific claims but have reserved the right to make them in the future. (Click on the map above to enlarge and see where the various stations are located.)