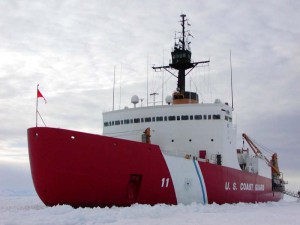 BreakingDefense.com has reported the Commandant has announced the release of  “a notional program schedule [and] notional Polar Icebreaker requirements” for two new heavy icebreakers today.

Details have been released to qualified contractors, but not the general public.

The reference to two icebreakers is a bit of a surprise. The source of the funding is not clear, but the Commandant suggest there is strong support in Congress and he sees some of it coming in 2017.

UPDATE: The additional details on the requirements from DefenseNews.

Specifically, the new ships need to be able to continuously push through up to six feet of ice — but preferably eight — going at least 3 knots.

In ice-free waters, it will need a sustained speed of 15 knots, or the speed at max horsepower.

The new icebreakers must also be able to: