Four years ago I wrote a post suggesting that the Offshore Patrol Cutter might be designed from the start for a wartime weapons fit, but then fit them out with only those systems required for their peacetime missions, which might have included only its helicopter, UAS, and 25 mm Mk38 Mod2 gun(s).

I started with the assumption that the OPC should be able to mount a weight of weapons at least equal to those mounted on the 255 foot Owasco class cutters as built during World War II (140-150 tons). This figure did not include ammunition other than depth charges, consequently, nearly all the weight was above the main deck. This now appears very conservative in that the Eastern OPC design is about twice the size of the Owasco Class. (For another data point, when built, the USS Fletcher, first of a class of 175 destroyers with a design displacement of 2,700 tons, had 161.8 tons of armaments and 190.8 tons of ammunition.)

In the earlier post, a possible wartime outfit that I believed might be used for designing the ship (and the weights I used) included:

Since we now have a notional design for the cutter and my own views have changed somewhat, I thought it might be worthwhile to revisit how this class might be armed in wartime. The design may have ruled out some of the systems above, but the surprisingly large size suggest it should be fairly adaptable.

In fact it looks like the OPC could be turned into a credible warship adding only deck mounted systems that require only minimal deck penetration for cabling and the like.

Based on earlier information, as built, the design will includes provision for

LRASM topside launcher concept. The size and weight are comparable to launchers for Harpoon. Photo: Lockheed Martin.
Currently there are three potential anti-ship cruise missiles that might be used, Harpoon, LRASM, and Naval Strike Missile. Harpoon weighs 1,523 lb (691 kg) with a 488 pounds (221 kg) a warhead. Naval Strike missile is smaller, longer ranged, and more intelligence with a weight of 900 lbs (410 kg) with a 276 (125 kg) warhead. LRASM is the newest and supposedly the most “intelligent.”
As I posted earlier, I think the Coast Guard could use a couple of LRASM on each of their NSCs and OPCs even in peacetime as a means of addressing the threat of a terrorist attack using a medium or large ship. It is the missile’s range (about twice the others) and purported ability to target specific parts of a specific target rather than its larger warhead, that made the LRASM the system of choice for this role.
Reportedly the LRASM deck mount is comparable in size and weight to the Mk141, which is the standard quad deck launcher for Harpoon. The only source I could find, indicated that the weight of a quad Mk141 with missiles is 27,126 lbs or 13.6 tons, or 27.2 tons for an eight missile battery. Still I can’t believe the LRSM will not weigh a bit more than Harpoon, seeing its warhead is twice as large. I will assume a quad deck mount weighs about 15 tons, or 30 tons for an eight missile outfit. In any case, if other types of missiles were used, they would weigh less.
These might be positioned either on the fantail or on the platforms aft of the 57mm and below the bridge, one deck above the foc’sle where it appears they plan to mount .50 caliber machineguns possibly in Mk49 ROSAM. 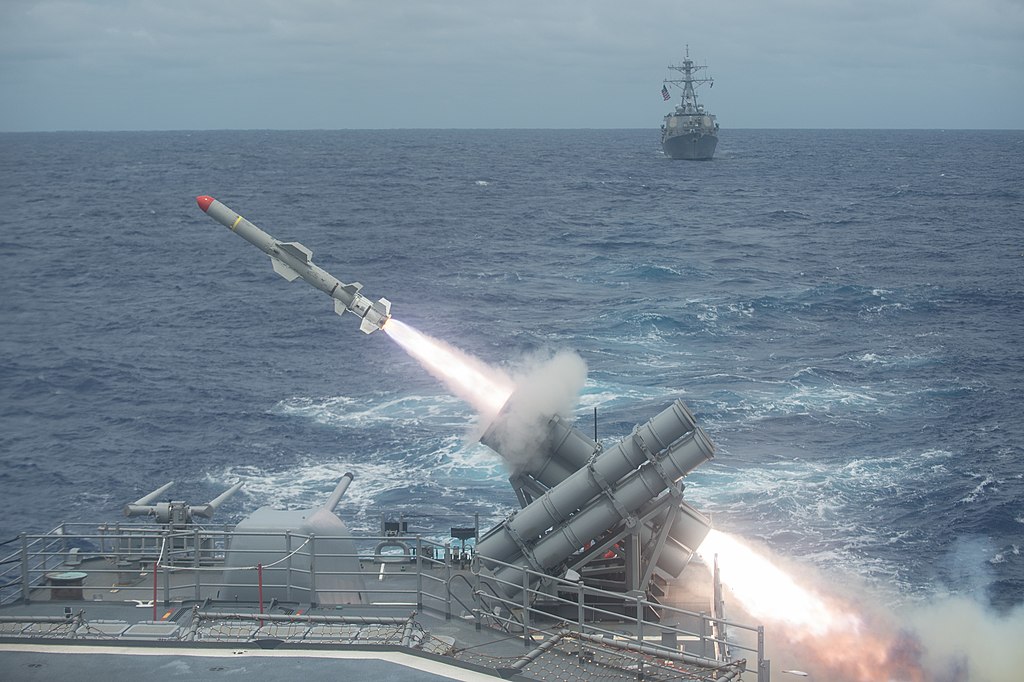 RGM-84 Harpoon SSM was fired from a Mk-141 missile launcher aboard USS Shiloh (CG 67). The Shiloh’s beam is only one foot more than that of the Offshore Patrol Cutter. Looking at the photo, you can see that the launchers take up well under half the width of the fantail.

Evolved Sea Sparrow Missile:
It appears it may be possible to equip the OPCs with ESSM (Evolved Sea Sparrow Missile). A new version of the missile, the ESSM block II, will obviate the need for illuminators that have been required for earlier versions. These would allow the cutter to provide limited local area AAW protection for ships that the cutter might be escorting out up to 25 miles. Additionally they can be used against surface targets.
Using the Mk56 VLS a loaded 12 missile module weighs 11.5 tons. Physically it is not very large. 3.66 m (12 ft) x 2.71 m (9 ft) x 4.65 m (15’3″) high. We could locate one or perhaps two of these on top of the superstructure where they apparently intend to store the third boat.  This may seem relative high in the ship, but it is the same position where the Oliver Hazard Perry (FFG-7) Class frigates mounted their 76mm gun and the OPC is considerably beamier (54 vis 45 foot).

Photo: Click to enlarge. The relatively small foot print of the Mk56 VLS system (pdf) can be seen here on a Danish Absalon-class command and support ship (beam 64 feet, by comparison the Offshore Patrol Cutters’ beam is 54 feet–same as that of the Bertholf class National Security Cutters).  Two sets are visible in the foreground, one set of twelve with missile canisters with red tops in place to the right, on the ship’s centerline, and a second set of twelve without canisters to the left. The Absalon class has three twelve missile sets, with the third set off camera to the right.

This could really be any of three systems, Phalanx, SeaRAM (a modified Phalanx with eleven rolling airframe missiles instead of the 20 mm gun) or the 21 round Mk 49 RAM launcher. Loaded, all three are about 8.5 tons or less.
An operations research study done for Australia “Limitations of Guns as a Defence against Manoeuvring Air Weapons,” (pdf) by Christian Wachsberger, Michael Lucas and Alexander Krstic, Weapons Systems Division, Systems Sciences Laboratory, DSTO-TN-0565 has convinced me that gun systems are unlikely to effective in the future, so for the OPC I would choose two SeaRAM. This has also been chosen for the frigate follow on to the Navy’s LCS.
Two LCS systems could provide automated 360 degree protection against the sudden attack of a coordinated anti-ship missile attack. One system could replace the Mk38 mod2 system currently planned for placement on top of the hangar. A second system could be sited on the superstructure forward and below the bridge, behind and above the 57mm. This might require a small extension of the superstructure to provide a platform sufficiently large enough to both support the system and allow access for maintenance.
AN/SQR-20 Multi-Function Array (Thales CAPTAS 4):

Photo: NavyRecognition. Reeling system for the CAPTAS-4 Variable Depth Sonar tether aboard a French Navy FREMM Frigate (Aquitaine class).
If there is a submarine threat, we will need a sonar. Additionally passive towed arrays may be used as a targetting system for anti-ship cruise missiles. In peacetime, a towed array might also be to locate semi-submersibles.
The Thales CAPTAS-4 is one of the systems being considered for the LCS and its frigate derivative. The current version weighs 20.6 tons. The US version will probably be lighter since the Navy is looking for a lighter version for the LCS. Additionally there are lighter options made by Thales and others, so what ever might be chosen is going to be this weight or less. It would of course be mounted on the fantail.

I will assume that the two Mk49 RO

The resulting additions would be:

We don’t really know if the ship can take this much weight. Assuming it displaces 4,000 tons, which seems likely, this is about a 2.3% increase in displacement and much of the weight is relatively high.

There are things that can be done to counterbalance the effects of this additional weight. Some fuel tanks might have to be left permanently full or be converted to ballast tanks. Given the extreme range of the cutter, even half of the design range would be more range than most Navy combatants.

We know the ship is supposed to have some weight moment reservation for additional weapons but we don’t know how much. There is also the requirement that the ship be able to take on, feed and shelter 500 migrants on the foc’sle or flight deck. Those 500 people alone would amount to almost 40 tons of additional top weight.

There are alternatives that could provide a simlar outfit while moving the weight lower. A more extreme change would be to replace both the Mk56 VLS (23 tons) and the 57mm Mk110 (15.4 tons) with Mk41 VLS (33.6 tons) in place of the 57mm. We would loose the gun, but this would provide the additional capability of launching Anti-Submarine Rockets (ASROC) as well. That might be a good trade, but it would require more radical reconstruction.

In short, adding less weight in weapons than carried by the 255 foot Owasco Class cutters of WWII, the Offshore Patrol Cutter could be turned into an effect surface combatant comparable to many frigates. The same sort of alterations could also be appied to the National Security Cutters.