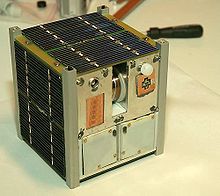 Acquisitions Directorate reports that the Coast Guard is planning to have two satellites launched to provide additional EPIRB detection capability primarily in the Arctic.

Two small satellites, scheduled for launch in 2018, will provide the Coast Guard with the opportunity to test the effectiveness of satellite communications in supporting Arctic search and rescue missions.

These satellites, or “cubesats,” are capable of detecting transmissions from emergency position indicating radio beacons (EPIRBs), which are carried on board vessels to broadcast their position if in distress. The Coast Guard will deploy the cubesats in cooperation with the Department of Homeland Security (DHS) Science and Technology Directorate’s Polar Scout program, the Air Force Operationally Responsive Space Office, and the National Oceanographic and Atmospheric Administration (NOAA).

There is more in the linked article. The satellites are cubes only 10 cm (3.9″) on a side. It is impossible to have geostationary satellites over the poles so coverage will be intermittent.