Naval News reports that the French Navy has recieved the first of six H160 helicopters. This is a bit larger successor to the Eurocopter AS365 Dauphin, a variant of which is the USCG H-65.

“169 H160M Guépards are foreseen to replace five types of helicopters in service with the French armed forces.”

These first few are not the fully militarized H160M versions. They are lightly upgraded civilian aircraft for use as SAR aircraft, including a Safran Euroflir 410 electro optical system and winching system. The aircraft are certified for night vision google use.

Would like to reference a fine piece of Coast Guard history, written by previous contributor Capt. Sean M. Cross (ret.), “This Day in Aviation, 18 September 1946.”
There is also a great video about the rescue here.

This may look like a routine announcement, but I found it interesting because of where it is, and the fact that it will include “Coast Guard helicopters, and Coast Guard cutters” –both plural. Utqiagvik, Alaska, formerly Barrow, is the Northern most city in Alaska, 71°17′26″N, 284 nautical miles above the Arctic Circle. The helicopters will probably come with the cutters (maybe not?), but what cutters? USCGC Healy, an icebreaker, seems likely, but there has got to be at least one more. Maybe Alex Haley, out of Kodiak, or a Bertholf class NSC on Alaska Patrol?

Hopefully we will hear more.

JUNEAU, Alaska – The 17th Coast Guard District and North Slope Borough Search and Rescue are scheduled to conduct an exercise near Utqiagvik, Alaska, August 31, 2022 through September 3, 2022.

The exercise is a small-scale search and rescue mission offshore of Utqiagvik named Operation Itqanaiyaq, meaning Get Ready or Get Prepared in Iñupiaq. The purpose of the exercise is for the Coast Guard and North Slope Borough Search and Rescue to practice procedures for maritime distress response.

The public will notice an increase in emergency responder and military presence in the vicinity of Utquiagvik during the exercise dates. The increased presence will consist of Coast Guard helicopters, and Coast Guard cutters.

“This search and rescue exercise provides a great opportunity for the Coast Guard to train alongside the North Slope Borough in an Arctic environment,” said Lt. Lindsay Wheeler from the 17th Coast Guard District. “We never know when we will need to respond with our aerial or surface assets to help find and rescue missing or injured people.”

The Indo-Pacific Defense Forum brings us news of a Navy sponsored Maritime Domain Awareness program that may be very useful to the Coast Guard.

“Artificial intelligence combined with satellite imagery provides a new capability to detect suspected IUU fishing vessels that may otherwise elude U.S. and partner nations fisheries enforcement agencies. This increased maritime domain awareness can be shared with like-minded partner nations to enable them to protect their sovereignty.”

A description here by the US Naval Research Laboratory.

This could be of assistance to any nation attempting to counter Illegal, Unregulated, Unreported fishing, including the island nations of the Western Pacific, who are desperately short on resources to monitor their ocean assets.

Baird Maritime reports delivery of a new 45 foot, 30 knot boat to Marine Rescue New South Wales (MRNSW), a volunteer organization. This boat, which is comparable to the Coast Guard Response Boat, Medium, has some interesting features.

Most immediately obvious is provision for a secondary conning position in the flying bridge. There is “…a specially designed hydraulic heavy lift platform that drops below the waterline to assist in evacuating people and in the recovery of heavy equipment from the water.” The boat also uses the Swedish Zipwake ride control system, which is claimed to outperform trim tabs.

A couple of good stories, about good people.

Below is the earlier news release about the Station Yaquina Bay rescue: 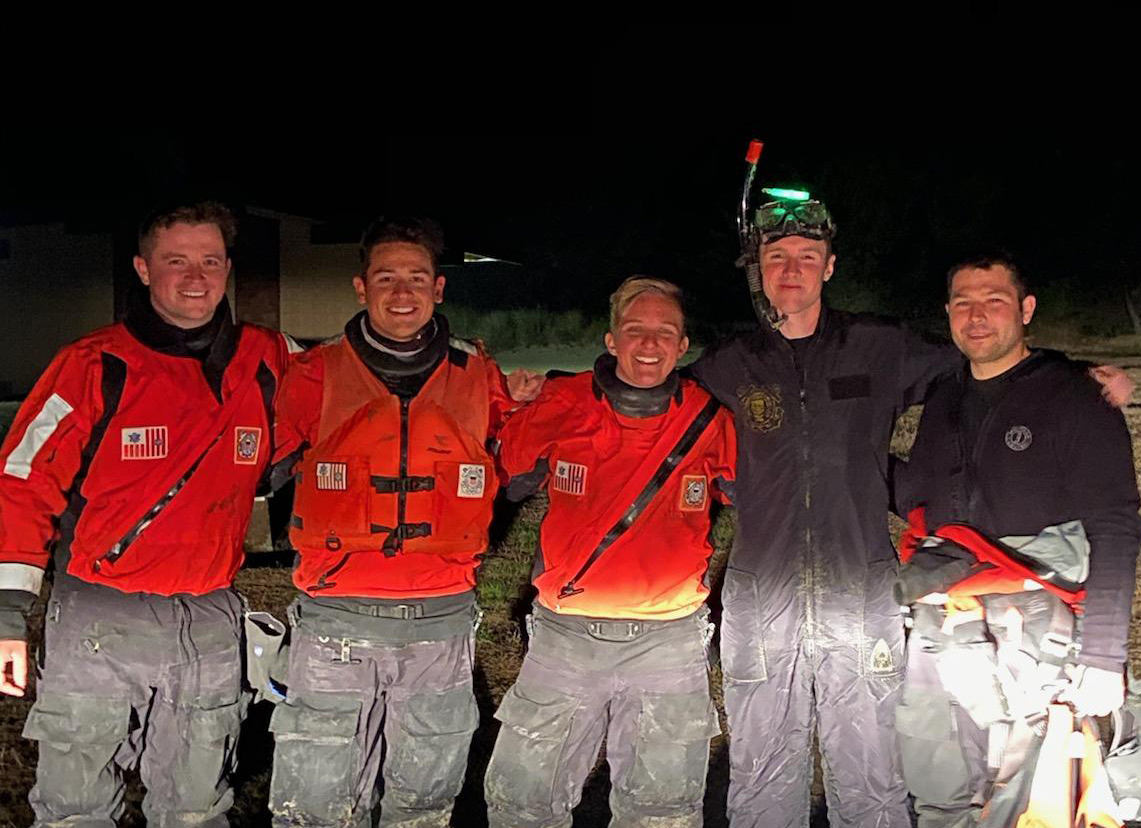 YAQUINA BAY, Ore. — A Coast Guardsman swam from shore to rescue a fisherman from the surf near South Beach State Park early Tuesday morning after his vessel ran aground and began taking on water.

The fisherman was forced to abandon ship after the vessel began breaking apart in 10-foot surf.

An Air Facility Newport aircrew aboard an MH-65 Dolphin rescue helicopter also responded but returned to base due to restricted visibility and hazardous weather conditions.

The weather on scene was reported to be 34.5-mph winds, 10-foot breaking surf, near zero visibility and 56-degree Fahrenheit water temperature.

Station Yaquina Bay crew members communicated with the distressed mariner via radio and instructed him to use flares to signal his location. The flares were sighted approximately 1.15 miles south of the Yaquina Bay jetties. The crew aboard the 47-foot Motor Lifeboat arrived on scene at approximately 1:20 a.m, but was unable to approach due to shoaling.

At this time, the ground party arrived on scene after running more than 1.5 miles from the South Beach State Park access area, carrying 500 feet of rescue line and other equipment.

At approximately 1:35 a.m., the mariner entered the water and Petty Officer 1st Class Wallace Qual made a first attempt to swim to his position. As the mariner was quickly being swept south by surf and currents, Qual returned to shore. With a second attempt, Qual successfully reached the mariner. The crew ashore pulled the two from the surf using the rescue line.

The mariner was transported to awaiting emergency medical personnel. No injuries were reported.

“The overall teamwork that went into locating the mariner, and the communication between our crews, was huge”, said Qual. “When I got to him, he was wearing his survival suit and had an EPIRB (emergency position indicating radio beacon) and strobe light in hand. That preparedness probably saved his life.”

The Coast Guard urges all mariners to be equipped with the proper equipment and have a reliable means of communication in case of emergency.

The Coast Guard is in the market for replacements for the 52 foot MLBs. Now this is, at 90 feet long, a good deal larger than the 64 foot maximum length replacement currently envisioned. At 120 tons, its larger than the 87 foot, 91 ton Marine Protector class WPBs, but in many ways, it’s probably more capable than either.

Compared to the 52 foot MLB’s planned replacement, it has longer range, probably higher sustained speed in adverse conditions, greater towing capacity, and a daughter boat capable of getting into the shallows. It also has a fire monitor and medical facilities.

Compared to the 87-footer, it appears more seaworthy. Though nominally slower than the Marine Protector class, it is probably capable of maintaining higher speed in rough conditions. It carries more fuel, 18,000 liters (4,755 gallons) vs 9464 liters (2,500 gallons), giving it a greater range at a higher speed, 900 nautical miles at 15 knots vs 882 at 10. Perhaps more impressive is the claim of a 600 nautical mile range at 24 knots. It also has bow thruster.

Something like this could replace both the 52-foot MLBs and at least some of the 87-foot WPBs. In addition to the Pacific NW, they would be a welcomed addition in Alaska or along the Maine coast.

The remarkable thing I see in the specs, is the crew, only four, about the same as the 52-footers. That would be a substantial savings relative to the ten-person crew of the WPBs.

Incidentally Fassmer is the designer of an apparently very successful class of Offshore Patrol Vessels used by Colombia, Chile, and Germany.

Coast Guard crew members aboard four 52-foot Motor Life Boats and one 47-foot Motor Life Boat transit in formation outbound of Yaquina Bay, Ore., April 9, 2019. The four 52-foot MLBs are the only active vessels of their kind and the crews are assigned to different units across the Pacific Northwest, which is why having all four together for the roundup was a rare occurrence.
(U.S. Coast Guard photo by Petty Officer 3rd Class Trevor Lilburn)

All four 52 footers are officially retired today. They are all currently underway to rendezvous at Station Cape Disappointment. The Intrepid left Coos Bay yesterday, the Victory left Yaquina Bay at 0200 this morning and the Invincible will leave later today.

The end of a era.

This certainly was not unexpected, and we have had some indication the Coast Guard is looking for replacements. My Feb. 2021 post on the topic included a number of comments and referenced earlier posts and possible alternatives.

While command center staffing only marginally increased, the creation of sectors diluted SAR expertise by increasing watchstander knowledge and training requirements to include those necessary for all Coast Guard missions. In particular, the operations specialist (OS) rating has endured the lion’s share of changes to core watchstander roles and responsibilities. As a result, the entire enlisted rating—which performs critical functions in the SAR chain of command—is at risk of collapse.

I was a district watch stander back in the stone age, before we had software to help planning, and before the Sector reorganization. I stood a 24 hour watch with an enlisted assistant and even then we did more than SAR. While I have not seen any indication his conclusions are valid, I am too far removed to trust my own opinion. I would welcome comments.

“TEKEVER has signed a new contract with the European Maritime Safety Agency for maritime surveillance by remotely piloted aircrafts. This innovative contract includes the deployment of lifeboats and many new sensors.”

I have to wonder if the capability is worth the trade-off? Most UAVs are weight constrained. To carry an inflatable boat would mean either less fuel or fewer sensors. Is this a capability that will be carried at all times, or is it an option to be loaded when needed? How often is this needed? Coast Guard aircraft frequently drop pumps, but I don’t remember hearing of their dropping life boats recently. In the European environment this may have something to do with the influx of migrants using unseaworthy craft.

The UAV they are using appears large in the photo, but it is actually smaller than the MQ-1 Predator. “The AR5 “has a maximum take-off weight of 180kg. It can reach a cruising speed of 100km/h with an endurance of 20 hours,” and has a SATCOM capability. A 20 hour endurance is good, but a 100 km/h (54 knot) cruise is relatively low.

On the other hand, they at least have a shore based UAS capability, something the US Coast Guard still does not have.