To no one’s surprise MarineLog reports that Davie Shipbuilding, Lauzon, Quebec, Canada’s largest shipyard, has been selected as the third shipyard partner in Canada’s “National Shipbuilding Strategy” and will build six icebreakers for the Canadian Coast Guard.

Some information from Canadian ship design agency VARD, on the planned Canadian polar icebreaker John G. Diefenbaker. The project is long delayed and construction has not yet begun.

There is much more detail in the VARD brochure and Wikipedia entry linked above, but a few significant data points.

For comparison these are figures for the planned Polar Security Cutter. Projected delivery dates, 2024, 2025, 2027.

In many ways the designs are remarkably close. Looks like the Canadian breaker will be slightly larger than the PSC, but will have a much smaller crew.

Presumably there will be no provision for armament since the Canadian Coast Guard does not arm its vessels.

The Diefenbaker’s very long endurance is a bit of a surprise, in view of Canada’s lack of a requirement to go to Antarctica, a feature that has driven the design of the PSC.

Propulsion power is almost identical, a bit over 45,000 HP, and both designs include three propellers, but the way it is done is different. While the PSC has a conventional shaft on the centerline and rotatable drive units to port and starboard, the Canadian design has a single rotating drive unit on the centerline and conventional shaft driven props port and starboard. This may provide the PSC with a redundancy advantage in that it might allow steerage even if one unit is damaged. On the other hand the single Canadian unit may be less likely to be damaged because of its position.

“The Great Lakes-St. Lawrence shipping industry is calling for at least five new icebreakers to be part of the (Canadian–Chuck) federal government’s recent announcement of $15.7 billion for Canadian Coast Guard fleet renewal.”

This appeal was addressed to the Canadian government, but we can expect to hear continued appeals for more USCG icebreakers on the lakes as well.

“Canadian and U.S. Coast Guard crews worked tirelessly during the Great Lakes spring break-out, but were hampered by the age and condition of the fleets at their disposal. Two U.S. Coast Guard icebreakers were out of service in March and a Canadian icebreaker assigned to Lake Superior was only able to operate at 60 per cent of capability and was idled in April due to mechanical issues.”

Congressmen from states bordering the Great Lakes have been asking for more icebreakers for years. There was $5M in the FY2019 budget to start work on procurement of a Great Lakes icebreaker at least as capable as USCGC Mackinaw.

There is an indication that the system may be expanded and the navigation season extended,

That economic contribution is only set to increase as ports and their customers invest in increasing the capacity of the waterway as well as looking at options like lengthening the navigation season of the St. Lawrence Seaway.

Workboat is reporting that the Canadian Coast Guard has taken procession of the 307.4’x59’ Captain Molly Kool, the first of three refurbished icebreaking anchor handling vessels that will fill in, as older Canadian Coast Guard vessels are taken out of service for major overhauls. We talked about these vessels earlier.

It does appear the Canadian Coast Guard has become an election issue and is starting to get some attention. As noted only last week, 18 more vessels are on the way. 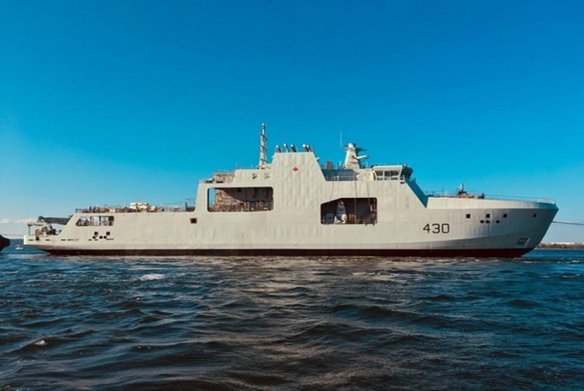 MarineLog is reporting that Canada is planning to build 18 additional ships for the Canadian Coast Guard including two additional Arctic Offshore Patrol Ships (AOPS, a type previously built for the Royal Canadian Navy).

They will also add a third shipyard to the national shipbuilding strategy.

The cost may appear out of line. The total for the 18 ships, C$15.7 billion (about US$11.7 billion) averages US$650M per ship. That is more than the average cost of the contract with options for three USCG Polar Security Cutters ($1.9B for three ships or $633M on average), but the price is not final and it appears it may include extended support.

The C$15.7 billion funding for the 18 large ships in represents early estimates of project budgets including construction, logistics and support, contingency, project management and infrastructure costs. The costs of each ship will be announced following contract negotiations.

Still there is likely to be some criticism.

There is also mention of an intention to also build some smaller vessels,

The Government of Canada will also proceed through a competitive process with the design of a new class of smaller ships, the new Mid-Shore Multi-Mission Ship, which would complement the work of the large fleet in shallow areas and deliver mid-shore science activities.

All in all, good news for the Canadian Coast Guard and an investment in ship building in Canada, assuming it actually happens. Like the US Coast Guard, they have had their problems.

“Vancouver, B.C., based Vard Marine, Inc. reports that the Canadian Coast Guard has awarded it an engineering services contract to explore concepts for the Coast Guard’s future fleet renewal program.

“…The work is intended to explore requirements for multiple future fleet ship types and could stretch over several years.“

Vard was of course a designer of the Offshore Patrol Cutter.

Some recent writings on China’s increasing interest in the Arctic caught my eye.

First there is this piece, “Opinion: China Is Joining the Rush for Arctic Riches.” by former NATO Supreme Allied Commander James Stavridis noting China’s apparent high level interest in the Arctic and its increasing military, political and economic alignment with Russia.

A wide ranging article from the Canadian Naval Review looks at “China’s Arctic Policy and its Potential Impact on Canada’s Arctic Security.” The author sees the roots of the Chinese policies in the Chinese Communist Party’s (CCP) quest for legitimacy. As a result China has asserted “rights in respect of scientific research, navigation, overflight, fishing, laying of submarine cables and pipelines, … and rights to resource exploration and exploitation in the Area,” The author also suggests the Chinese see the Northern Sea Route as a way to avoid the US Navy’s potential blockage of the Straits of Malacca, but I cannot see that as a possibility, given the US possession of the Eastern half of the Bering Strait.

Lastly, some details about the new Chinese icebreaker have been reported by NavyRecognition. It is going to be very large.

“Next, came the official announcement that China intends to build a nuclear icebreaker. It will be 152 meters in length, 30 meters wide, and will displace 30,000 tons.”