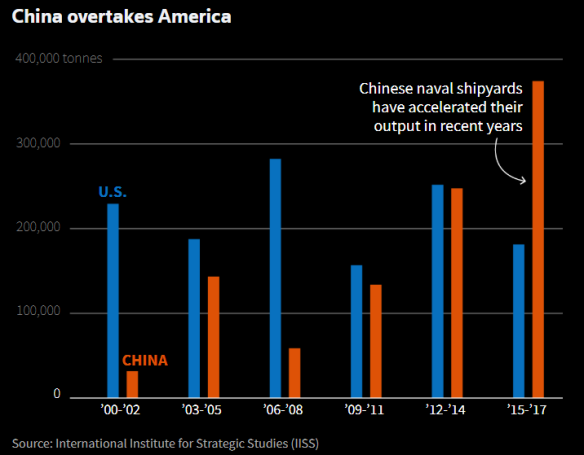 Respected Naval blogger CdrSalamander has a short post on the US Naval Institute blog warning that “The Pacific Will Pivot With or Without You.” It is really a quick look at a longer Reuters report, “China’s vast fleet Is now tipping the balance in the Pacific.” At the center of the stories is the chart above, showing how fast the Chinese have begun to build. The message is simple.

We are in a naval arms race with the most prolific shipbuilding nation in the world.

The new reality is that China is building up their navy at a rate about twice as fast as the US, not just in numbers but in overall tonnage. That appears to mean, in about 30 years, the Chinese Navy could be twice as large as that of the US. Hopefully there will continue to be mitigating  factors, but since any conflict is likely to be in the Western Pacific, the Chinese also have an enormous geographical advantage.

It is time for the Coast Guard to step up their game as an armed force, with real arms and actual missions for a major war that the service has planned, practiced, and equipped for.

13 thoughts on “Chinese Are Outbuilding the US in Warships”