W B Young asked a question, wondering if perhaps the crew requirements for the new fleet of patrol cutters might be significantly greater than for the fleet being replaced. I ran the numbers and was surprised by the answer.

In a recent interview by Seapower Magazine the Commandant was asked, “Does the Coast Guard have enough people to man these new cutter coming online?” He really only talked about the NSC/WHEC comparison, but he did provide crew numbers for each, 178 for the 378s and 128 for the NSCs.

The crews of the Coast Guard Cutters Midgett (WMSL 757) and Kimball (WMSL 756) transit past Koko Head on Oahu, Hawaii, Aug. 16, 2019. The Kimball and Midgett are both homeported in Honolulu and two of the newest Coast Guard cutters to join the fleet. (U.S. Coast Guard photo by Petty Officer 3rd Class Matthew West/Released)

We are replacing twelve 378 foot WHECs with eleven Bertholf class, so:

The legacy fleet of 29 WMECs included Alex Haley, Acushnet, fourteen 210s, and thirteen 270s. We have pretty good figures for the crew size of these older ships. For the 25 projected OPCs, we have only the figure for accommodations, 126. I have assumed the crew size will be the same as for the 270s, 100, but it might be more like 110. 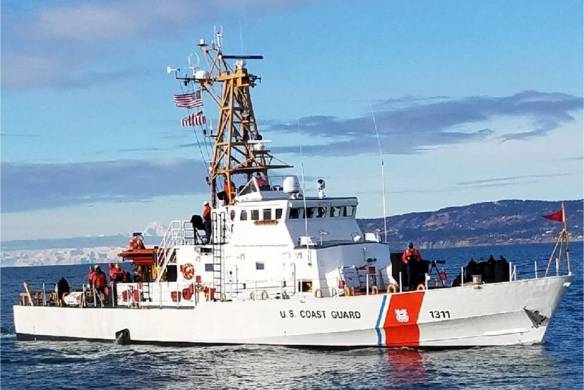 64 Webber class are replacing 49 Island class 110 foot WPBs. Actually we were down to 41 of the 110s before the FRC contract was awarded because of the abortive attempt to lengthen eight of the class by 13 feet. All eight were withdrawn from service in 2006.

This is where we see a significant increase. The crews of the 110s was nominally 16, though they may have carried more. For the crew of the Webber class WPCs I used 24, though the original crew was, I believe, supposed to have been 22.

So to add it all up:

Wow, how did that happen, so should be no problem right? Maybe not.

Since the this particular Legacy fleet existed, a number of things have happened to reduce the number of afloat billets.

Eight Island class WPBs were decommissioned after the attempt to lengthen them, a 128 billet decrease.

Acushnet was decommissioned, a 75 billet decrease.

378s have been decommissioned faster than NSCs have replaced them. Instead of twelve 378s we now have eight NSCs and two 378s, 24 billets less than the ultimate NSC fleet and 756 fewer than the legacy WHEC fleet.

Billet decreases due to replacement of 378s by NSCs is running ahead of billet increases as a result of replacing 110s with FRCs. About 73% of the NSCs have been commissioned compared to only about 60% of the FRCs.

So the fleet has already seen all the reductions in crew size and for the next few years, we should see an increase in the total number of billets. It appears we will have to add a bit over 500 additional billets to what we currently have.

This may have something to do with the decision to decommission some 87 foot Marine Protector class WPBs without replacement.